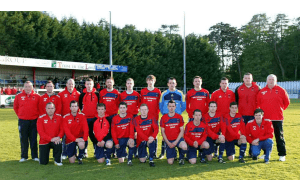 Rovers began the game at speed, dominating the early exchanges and could have scored three or four in the first 20 minutes.

Crewe tried to get going but where constantly pressed down all over the pitch. Rovers deservedly took the lead after 32 minutes when a corner was headed home by Tiernan McShane at the near post and they held onto this slim advantage until half time.
Crewe started the second half much better and began to get a stranglehold on the game, but Rovers who kept up the same tempo as the first half increased their lead, again from a corner which was stabbed in at the near post by Gary McGarvey.

Crewe came storming back and within 10 minutes were level after they capitalised on two uncharacteristic defensive errors to make it 2-2.

Rovers pushed on in search of a winner and from a free kick in the centre of the pitch, Gary McGarvey headed home what proved to be the winning goal.

There were exactly 15 minutes left plus whatever time the Referee was to add on and Crewe threw everything at the Rovers’ defence in the hope of getting a third goal but it wasn’t to be and Rovers held on for a famous win which overall they deserved.