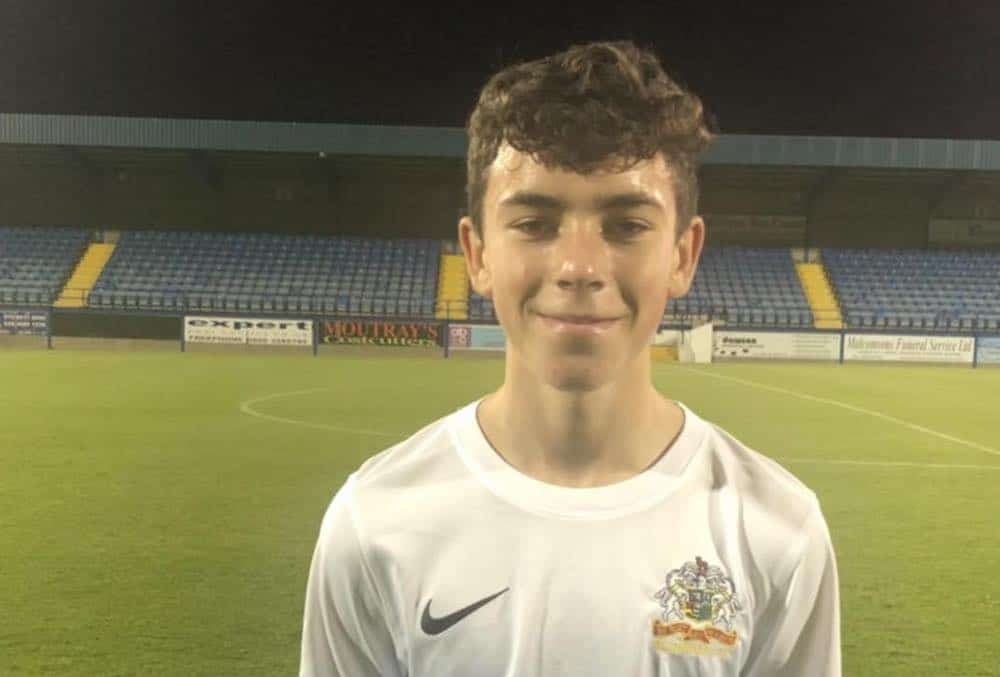 Christopher Atherton made his first team debut at the age of 13. Photo: Glenavon FC Academy

A Glenavon FC teenager has made football history in the UK by becoming the youngest ever player to make his first team debut in a first class fixture – at the age of 13.

Academy graduate Christopher Atherton, who has been with the Lurgan club for nine years, came off the bench against neighbours Dollingstown on Tuesday night to cement his place in the record books.

And he played his part in helping Glenavon to an emphatic 6-0 win in the first round of BetMcLean League Cup tie by providing an assist, teeing up Matthew Snoody for his side’s sixth goal.

Speaking to the Club’s YouTube channel, manager Gary Hamilton said he was a credit to himself and his family.

“I’ve had the pleasure of watching him every other week for the last seven or eight years because he plays on the same team as our Callum and he’s a joy to watch,” said Hamilton.

“He’s a great kid but the work he does away from training at Glenavon and the dedication he has to become a professional footballer is unbelievable and that’s what separates him from a lot of kids at the Academy.

“He works night and day at his game; he eats the right foods, he goes to bed at the right time, he does everything he can to become a better footballer and to try and give himself the best opportunity of becoming a professional footballer.

“I’ve been watching for years and for a long time I’ve said he’s the best player that I’ve seen at his age.

“He’s come on there tonight, he doesn’t give the ball away once in all the time he’s on. So as a 13 year old kid, a lot of us at that age would have been dreaming of becoming a footballer.”

Hamilton admitted Atherton could have become the youngest player in the world had he been around for the last game of the season.

A trip with his dad to watch Celtic play last season scuppered those plans, to which Hamilton joked: “He’s just going to have to settle for being the youngest player in the UK.”

According to stats man Marshall Gillespie the previous record was held by Blackpool FC’s Eamon Collins who was 14 years and 323 days old.