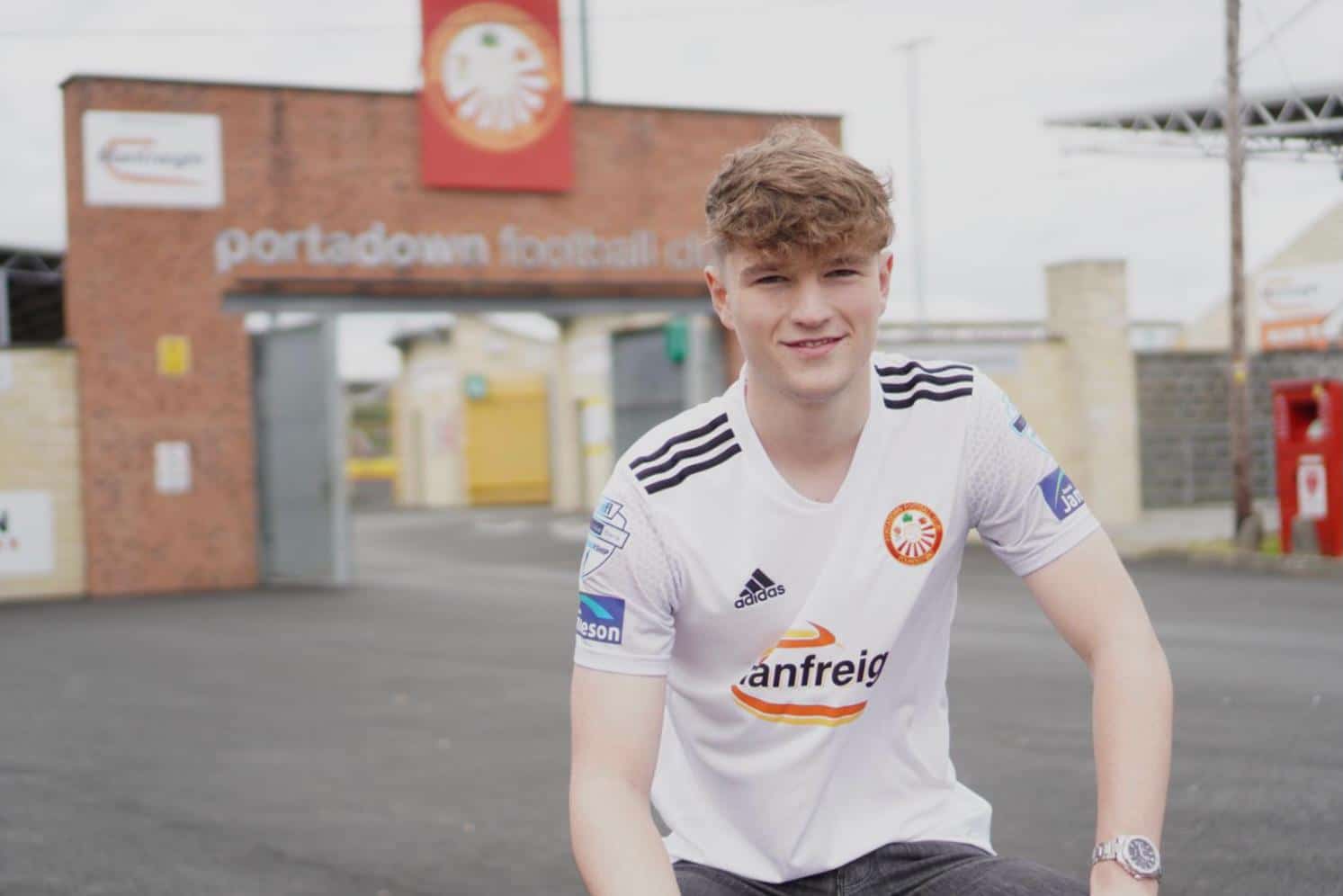 Portadown Football Club is pleased to announce the signing of striker Harry Anderson on a two year contract.

Anderson, 18, should be no stranger to Ports supporters having spent 10 years at  Shamrock Park under the tutelage of youth coaches including Gary Magee, Peter  Mullen and Neil McCullough, progressing to become a mainstay of our successful Under 20s squad before departing for Portsmouth in 2019 at the age of 16 with just one senior appearance under his belt.

Harry would spend the next two seasons as a regular within the Portsmouth Academy side becoming a consistent goalscorer, picking up the League Football Education goal of the month for January 2020 for a spectacular goal against AFC Bournemouth.

Portadown manager Matthew Tipton, said he is really excited about Harry following his return to the Club.

“Obviously he was here prior to going to Portsmouth and  was in and around the first team as soon as I came to the club and I was delighted  he got his move to Portsmouth and kept in touch with him over the two years.

“Portsmouth aren’t having a under 23 team and he’s probably not ready for their first  team just yet even though he scored bundles of goals over there in the last two  years. It just didn’t work out and maybe he was thinking of trying to stay over there  but I had a good conversation with him and his agent and explained what we’re  doing here. He’s still only 18 and if he can come into our first team and hit the  ground running the move back to England could happen.

“If any of our supporters have been following Harry’s progress they’ll see Harry’s  been scoring lots and lots of goals, I’ve known Harry since the age of 10 and Harry’s  always had that ability to score goals and you don’t lose that whatever age you get  to.

“Over the two years we’ve looked at his stats and the data Portsmouth have shared  with us shows his all round game has improved, when to make runs, the timings of  those runs and his hold up play. He’s a good size and can run like the wind, when he  went to Portsmouth initially he broke every record over there for 5, 10 and 20 metre  sprints and with two years full time training that’s only going to have improved him in  terms of his running power and strength and it’s something I’m really looking forward  to. “Now he’s coming to play real football, it’s alright being a brilliant under 18’s footballer  and he has been previously a brilliant under 20’s player with us but now we want him  to transfer that to the real games and I look forward to him coming in.”

While Harry told portadownfc.co.uk: “Matthew always kept in contact with me whenever I was over in England and he  spoke to me and my agent and I’m happy to be back.

“The standard of the Irish League is getting higher and higher every year and I see it as a challenge to preform at the top level of Irish League football. Matthew was a  good striker and I’m hoping he can develop my game even more.”