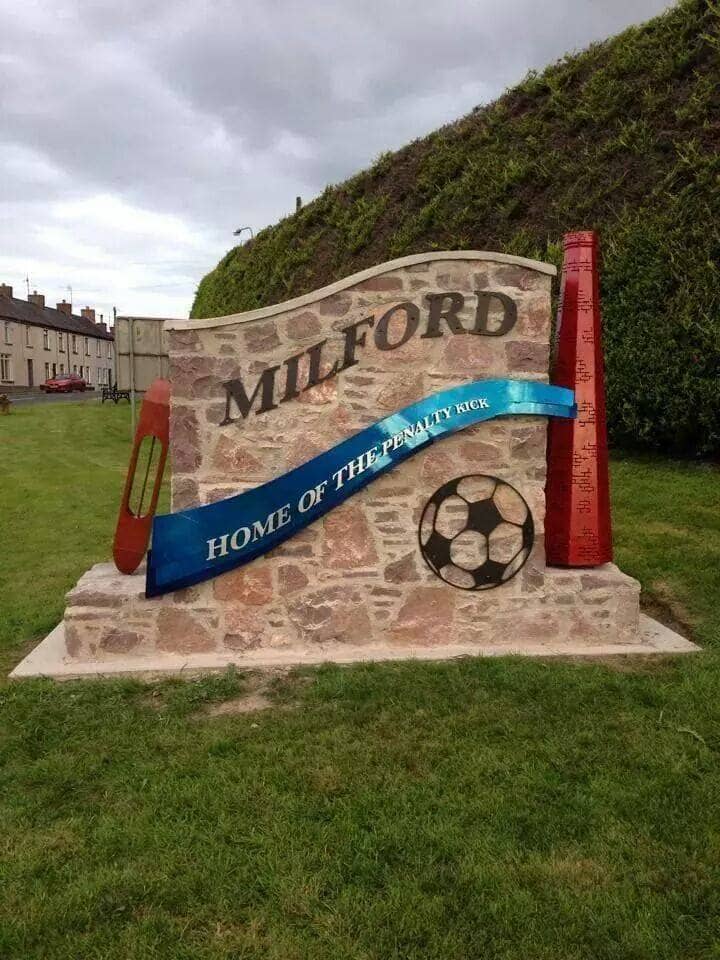 A bid for cash to restore the grave of William McCrum – the founder of the internationally recognised penalty kick – has been REJECTED by the Heritage Lottery Fund, Armagh I can exclusively reveal.

It was first introduced into the ‘laws of the game’ in June 1891 and was designed to stop the all too common practice of defenders professionally fouling an attacking player to stop a goal.

William – whose family home was at the Manor House in Milford – died on December 21, 1932.

He is buried within the grounds of St Mark’s Parish Church in Armagh and, 82 years after his passing, his grave is much in need of restoration.

An application had been submitted by the Milford Northern Ireland Supporters’ Club to the Heritage Lottery Fund to enable this to be done.

It had the backing and support also of the Amalgamation of Northern Ireland Supporters’ Clubs, which has almost 60 affiliated members.

But the William McCrum Grave Restoration Project – as it was submitted to the Heritage Lottery Fund for consideration – has been turned down, the decision having been taken at a recent meeting of the HLF Board.

Philip Johnston, of the Milford NI Supporters’ Club, commenting via our Facebook page, said: “We had applied for funding and it was rejected. We will be holding a fundraiser in the start of 2015.

“The IFA are unable to support the funding financially but will support us in other ways if at all possible and have promised to have a museum in the new national stadium at Windsor Park with a section dedicated to William McCrum.

“With the support from the footballing family we will get it restored and hope to do so in the New Year.

“Thanks for your support Armagh I and the public.”

The plan to restore William McCrum’s grave also had the backing of the famous Milford man’s descendants.

His great grandson, Robert, had sent an email to the Milford NISC during the summer offering his “full support” and adding: “As all of the family are spread all over the world and none live in Northern Ireland we are not able to undertake this project ourselves.”

But he adds: “We heartedly support its restoration.”

William McCrum’s legacy to the world of sport was recently recognised locally when one of the Armagh District’s gateway features for Milford hailed it as the ‘Home of the Penalty Kick’.

Soccer pundit Gary Lineker has also visited the Co Armagh village previously – and the grave at St Mark’s – during the course of filming for a football documentary and to recognise McCrum’s contribution to the beautiful game.

It had been as a member of the IFA that William McCrum first proposed the penalty kick rule in 1980, which read as follows: “If any player shall intentionally trip or hold an opposing player, or deliberately handle the ball within twelve yards from his own goal line, the referee shall, on appeal, award the opposing side a penalty kick, to be taken from any point 12 yards from the goal line, under the following conditions: All players, with the exception of the player taking the penalty kick and the goalkeeper, shall stand behind the ball and at least six yards from it; the ball shall be in play when the kick is taken. A goal may be scored from a penalty kick.”

It is hoped that other avenues of funding can now be explored or a fresh application submitted to allow the McCrum grave restoration to proceed.