'To be up there on the podium was unreal... I still can't believe it' 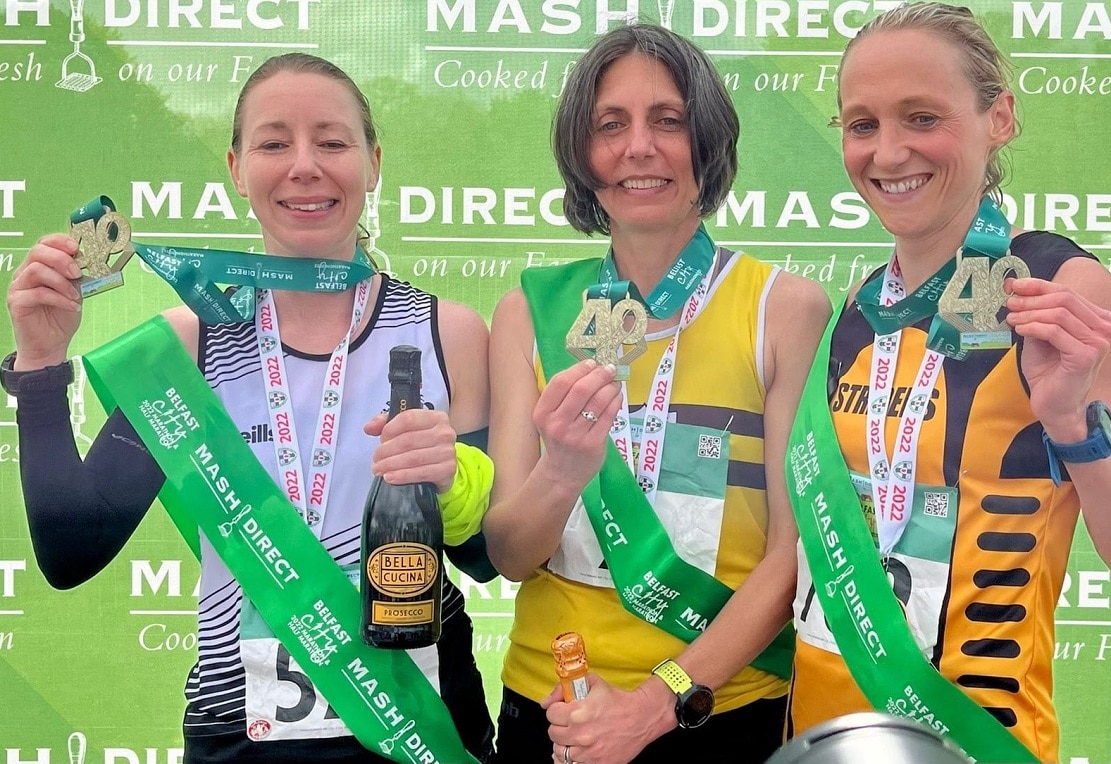 A Lurgan woman who took up running almost by accident nine years ago said she is still in shock after coming second in the women’s race in Belfast City Marathon earlier this month.

Gillian McCrory, a mum-of-three, beat her personal best to finish the race in an amazing two hours, 52 minutes.

The 43-year-old was beaten by Gladys Ganiel, a Commonwealth runner who narrowly missed out on the Olympics.

“To be up there on the podium was unreal. I just do it because I love it. I have an awards ceremony to go to next week. I still can’t believe it,”  she said.

It’s a long way from Gillian’s initial foray into running when she completed a leg of the Belfast marathon as part of a work team.

“I had just started a new job and I thought it would be a nice bonding thing. I remember going out and doing my first run and barely making about five lamp posts down,” she said.

“I had never run in my life before. I was always the one in the library at school or hiding at the back on sports day and at PE.”

As part of her relay preparations, she joined the City Park parkrun in Craigavon in 2013 and was eventually persuaded to join St Peter’s AC Lurgan running club.

In fact, Gillian’s performance at the Belfast marathon made history for the club as she bagged it a first ever podium place in the race.

When Gillian started running, her second child had just been born and when her third was due, she kept running all through the pregnancy.

“That helped me so much. I had such bad morning sickness and the only time my brain switched off was when I was running,” she said.

“I also found the labour a lot easier, probably because I was fitter.” Enjoying a bit of craic at one of the park runs

The Belfast marathon was Gillian’s 24th marathon, with others including Dublin, Derry, the Causeway Coast (her first marathon), London and Berlin.

Gillian, who works full-time for the NI Statistics and Research Agency (NISRA), also helped set up the Lurgan Junior Parkrun four years ago, with funding from the council.

Despite her busy schedule, she still manages to fit in around 60-70 miles a week, usually early in the morning or late at night.

Summing up the appeal of running, she said: “It’s just clearing your mind. If you’re having a bad day in work or you’re trying to figure something out, you just go out for a run and you can sort it out or you can switch off and look at nature. I love getting outdoors.

“It’s also the people I have met along the way, the park runners and the runners from my club. I’ve met amazing friends I would never have met any other way.

“St Peter’s is an amazing club with a really nice ethos. It’s open to anyone from any background, whether you’ve ever run or not.” Having taken a very brief break following her big win, Gillian is now looking forward to the London and Dublin marathons in October when she is hoping to better her time again.

Meanwhile, for anyone interested in giving running a go, St Peter’s club meets at the fountain in Lurgan Park at 6.30 on Tuesday and Thursday nights, and the City Park parkrun takes place every Saturday morning at 9.30, meeting at South Lake Leisure Centre.