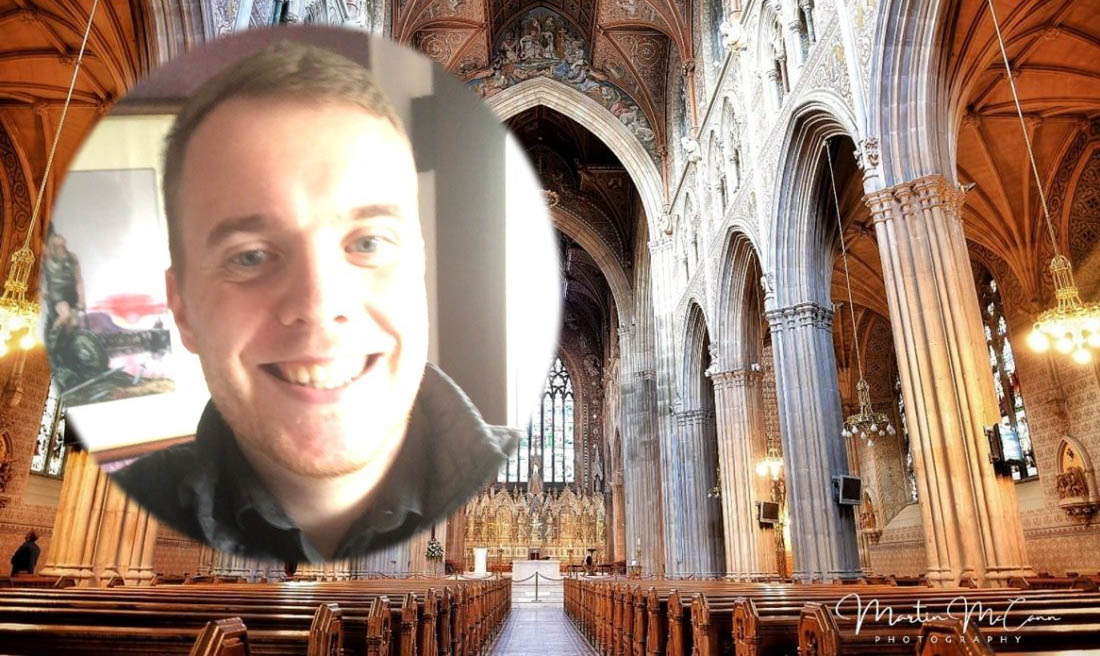 Mourners at the funeral of a young Armagh man who died while playing football with his friends have heard how he had “a huge heart” and “infectious laugh”.

Oisin Fields tragically passed away at Madden football field – doing something he truly loved – on Wednesday. He was just 30 years of age.

His death sent shockwaves across an entire community this week, and this was reflected in the turnout along the route of Oisin’s final journey from his home in Drumarg Park.

Addressing mourners inside St Patrick’s Cathedral on Saturday afternoon, Fr Barry Matthews, spoke of Oisin’s huge heart; a heart that spread “so much love, fun and generosity in this world” but sadly, “a heart that was indeed weak and in the end it was not able for this world”.

“Over these last days I’ve learned something of Oisin’s personality,” said Fr Matthews. “It was lovely to hear him being called somewhat mischievous and very witty.”

But it was his “infectious laugh” which Fr Matthews mentioned in particular. “No matter who spoke to me about Oisin spoke about how he made everyone laugh. He made everyone very comfortable in his presence.

Over the last number of years Oisin, who was a past pupil of St Malachy’s Primary and St Brigid’s High School, found a great home at his work – McElmeel Mobility Services – and he found that the staff there “treated him like one of their own”.

“Of course, we know the sad thing happened this week at Madden football pitch,” said Fr Matthews who spoke of Oisin’s heart, and the love he spread from it before his untimely passing.

He continued: “He was a great fan of Red Neds, the Toby Jug and indeed he enjoyed his pint in the Pearse Og club where he worked on occasion behind the bar.

Fr Matthews said that during Oisin’s short life “he lived a lot”.

“In Oisin’s short years he truly achieved an incredible amount and he has left behind a legacy of love, a legacy of great hope for his next generations and for his brothers, his parents and wider family.”

Oisin’s remains were led from the Cathedral to Donna Taggart’s ‘Jealous of the Angels’ before he was laid to rest afterwards in St Patrick’s cemetery.

Oisin was the son of Tony and Antoinette and brother to Anton and Ronan. May he Rest in Peace.