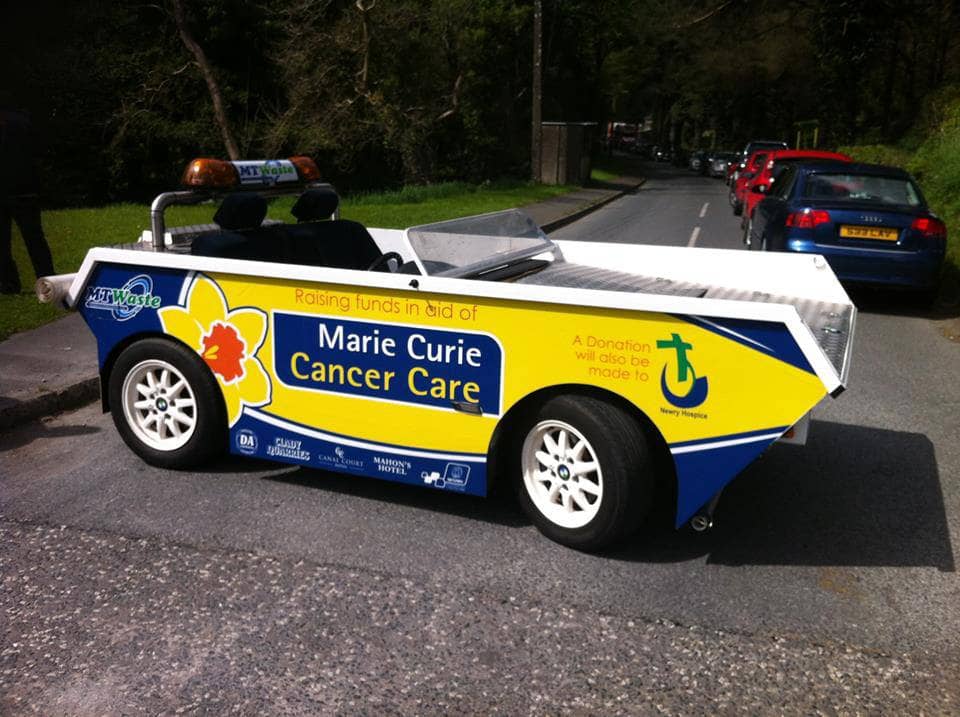 On Saturday, February 22, ‘The Skip Car Tour’ will pair up their dancers in what they hope will be their best fundraising year to date.

The charity in question is of course the Marie Curie Cancer fund. “The Skip Car Tour” is a fundraising venture that began in 2011, when the crew was really only involved in transporting the skip car around the local area in county Armagh and generated funds of about £1000.

The skip car was custom built from the chassis of a BMW and has been kitted out with an eye catching Marie Curie exterior.

The car has become the ‘mascot’ for the crew’s fundraising efforts and is sure to turn heads where ever it goes, including the St. Patrick’s Day Parade in Birmingham last year where the car travelled and became a highlight of the procession.

Year on year the crew has grown, introducing new faces, some great new ideas and attractive venues and raising over £50,000.

With continuous support from the very generous MT Waste and a lot of other companies chipping together for 2013 & 2014’s efforts The Skip Car Tour’s success will continue.

The Skip Car Tour crew are striving to make 2014 their most successful fundraising year to date. The crew began preparing in November for their main event this year; The Ultimate Strictly Come Dancing, which will be held on 7th November 2014 in the Canal Court Hotel, Newry, to raise money for Marie Curie Cancer Care and Southern Area Hospice.

It is the first of its kind as the crew have involved dancers from different backgrounds and communities, such as GAA clubs, the Ruby Club, the Cricket Club and Collone Young Farmers to name a few.

The crew have enlisted the expertise of Dungannon local, Lisa Cassidy to choreograph the show and support them with this mammoth challenge. Twenty- two willing participants will be paired up and taught moves to wow their supporters and audience in November.

The crew will be launching this cross community event on 22nd February in Sheils’ Bar, Tassagh at 9.30pm where the dancers will be introduced to their partners for the first time.

The night includes entertainment from the infamous Philly Gribben and promises to be a fun filled night with photographers and videographers on the scene to capture every move of some of the county’s finest sporting stars, business heads, entertainers and popular faces all in order to raise funds and awareness for a worthy cause that has affected or touched us all in some way.

To view all the named dancers so far click here