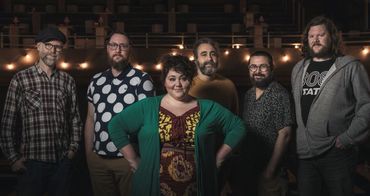 Still residing as BBC Radio 2 Folk Singer of the Year, Ríoghnach Connolly’s taste for musical adventure is eclectic. Along with her companion players, as Honeyfeet, they collectively drive a broad terrain of musical textures from esoteric protest songs to foot tapping, and floor thumping, dance rhythms.

Ríoghnach (pronounced ree-oh-nah), and the Honeyfeet ensemble are equally proficient in headlining festival stages as they are in stripping back to sublime obscure jazz on theatre stages.

An eclectic troupe, all now based in Manchester, Honeyfeet’s heavy sound spans from the bountiful to the subtle, with everything from big-band swing to Alabama blues-tinged folk, all held together by the powerful vocals and flute from Ríoghnagh