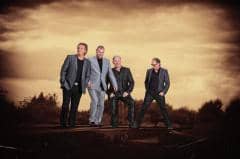 The Market Place Theatre in Armagh has just released its Autumn | Winter 2014 season programme, which takes off with an amazing array of events to brighten up your September evenings.

Following their critically-acclaimed production of ‘L’Elisir d’Amore’ last year, award-winning Northern Ireland Opera return with Mozart’s most popular opera, ‘The Magic Flute’ on 4th September. With colourful characters including a giant serpent, a loveable bird catcher, and a hero on a quest to rescue a beautiful princess, The Magic Flute features some of opera’s most famous arias and a hilarious fairytale story of good and evil.

Don’t miss out on the rare chance to see Conal Gallen back in his one-man stand-up show on Friday 5th and Saturday 6th September, and see why he really is Ireland’s funniest man! Due to the phenomenal success of Conal’s comedy play ‘A Bit On The Side’, he has been doing a very limited number of one man stand up shows and the Market Place Theatre is the place to see him.

Taking centre-stage at September’s Jazz Supper Club on Friday 5th is clarinettist and alto saxophonist Gay McIntyre whose associations include Acker Bilk, Kenny Ball, Louis Stewart and Nat King Cole among many others. He will perform tracks from years gone by that provide fond memories of his extensive career. Timeless classics such as ‘Strangers On The Shore’,  ‘Moon River’, ‘Danny Boy’ and ‘The Days Of Wine And Roses’.

Now in their seventeenth year together, ‘Talon’ (pictured) have been recognised at the ‘National Tribute Awards’ as the ‘Official UK No. 1’ Eagles tribute show. Their latest production will feature all the classic Eagles hits including ‘Hotel California’,  ‘Lyin’ Eyes’, ‘Take It Easy’, ‘Desperado’, ‘Take It To The Limit’, ‘Life In The Fast Lane’, ‘The Last Resort’ and many more, and will be staged on Thursday 11th September.

Pat McCabe is one of Ireland’s most daringly original writers. ‘Frank Pig Says Hello’ is the stage version of his highly acclaimed novel ‘The Butcher Boy’ which was shortlisted for the Booker Prize. Set in 1960’s rural Ireland, it is a poignant and provocative journey into the heart and mind of Francie Brady, a young man driven beyond the boundaries of his mental and emotional health.

The Market Place is delighted to present ‘Night Music’ new for 2014, a series of classical concerts featuring top classical performers with the opportunity to enjoy wine and tapas before the show. On Friday 26th September, award-winning Northern Irish pianist Michael McHale will fit the bill with a delightful programme of popular classics, including Schubert’s Four Impromptus op.90, alongside music from his début solo album, ‘The Irish Piano’.

On Saturday 27th September, it’s time to dig out those flares and boogie on down to The Market Place for our ‘Super 70’s Saturday’. Kicking things off and celebrating the 40th anniversary of ‘Waterloo’ and the music of ABBA is ‘The Bjorn Identity’, Ireland’s premier Abba tribute show. Audiences of all ages can discover and re-live the magic of the Swedish Super Group, Abba and their musical legacy. The night of nostalgia continues with our 70’s themed disco after the show with Fancy Dress Competition prizes and lots of special offers and promotions in the bar.

The Market Place Theatre Cajun | Bluegrass Club returns by storm to round off September on Saturday 27th, with the best of bluegrass and Cajun music and food that is as spicy as the music. ‘Wookalily’ is a female led Americana folk band with roots in bluegrass and country. They turf out timeless songs from the bogs of Northern Ireland to the bayous of Louisiana. Their style has an old-timey feel with a young-timey appeal.

Tickets for all events can be booked by contacting the Box Office on [028] 3752 1821, or online at www.marketplacearmagh.com