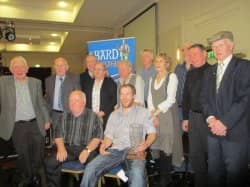 In the true spirit of Crossmaglen legends, Martin Hearty put on a storming performance to claim the coveted Bard of Armagh title in a packed to capacity Armagh City Hotel last night (Friday).
And Newry and Armagh MP Conor Murphy led tributes to the mirthful Martin and expressed his delight.
“This is a prestigious title which is much sought after,” Mr Murphy said this afternoon (Saturday). ” I know Martin as a man of letters and I am looking forward to following his future as a storyteller.”
Mayor of Newry and Mourne Michael Ruane also congratulated Martin, saying: “He is a brilliant example of the talent which the young people of our district possess.  To have been selected as the Bard of Armagh out of all the other talented entrants really is something to celebrate and I wish Martin well for the future.”
Displaying high energy, eloquence and clarity last night, and with his rich brogue in full throttle, Martin reached the point of ripeness with his stunning performance of ‘The Culchie Gangster’. He was clearly ‘up for the match’ and his preparation and pre-planning bore rich fruit before an appreciative audience.

Last year’s Bard winner, Sean McCormack was hospitalised and was unable to attend, but he had an able deputy in Virginia man, Patsy McDermott, whose rendition of ‘Drunken Dream’ at short notice was magnificent and came in a strong second.

The overall standard was truly impressive, with the scale of laughter reaching the highest of heights during the entire evening. Central to everything as usual was the brilliant MC Pearse McBride, who kept the laughter juices flowing freely with his relaxed and ever witty style between the recitations.

The evening began with the presentation of the Gerry Watters Hall of Fame award to Roslea man Seamus Carolan, who enthralled the audience with his winner of 2000, ‘The Pope Returns to Ireland Incognito’.

Briege Murphy won ‘The Rosemary Twohig’ award as the ‘best female bard’. Rob Barrat, from Cornwall, really charmed everyone with ‘Distressed’ and the irrepressible and indomitable Jimmy Rafferty knows how to turn it on with yet another epic yarn ‘Confessions of a Leprecaun’.

Included too in the top five was Brookeborough’s Damien McGirr, who abandoned the notes and recited his poem ‘Cavalier Knights’ with perfect accuracy and fluency.

The highlights of the 2012 and 2013 Bard finals will feature on a new CD ‘Rise to the Bardic Gathering’ hitting the market very soon, in time for the Christmas market.