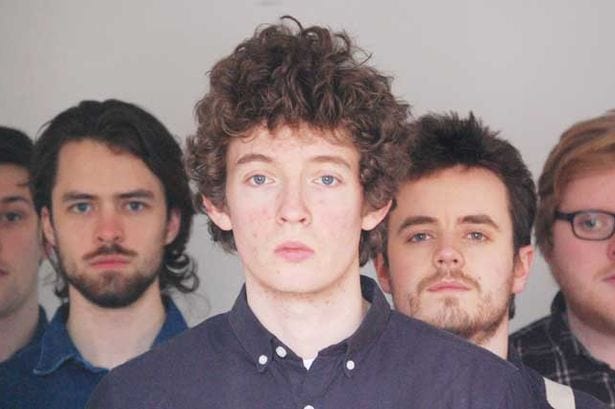 The five-piece band are being promoted all over China; with their faces splashed across buses and around major universities.

The indie-folk group are part of UK Music on The Go, a campaign from the British Council aiming to offer the Chinese audience access to 10 new songs from 10 cutting-edge UK bands.

They’re in good company too, sharing the roster with a number of renowned acts — including Mercury prize-winning Young Fathers and Scottish post-punk band The Twilight Sad.

The campaign, which involves using the bands’ lyrics and a QR code, will be promoted across China on 100 buses in Shanghai, 30 buses in Nanjing, Chongqing and Wuhan respectively, as well as in Beijing, Shanghai and Guangzhou university campuses.

The QR codes will then direct the Chinese audience to the microsite UK Now where they will be able to listen to the ten chosen tracks.

It is part of the British Council’s UK-China Year of Cultural Exchange celebrations, and the band can expect to be publicised across China until July 18.

Silences, made up of Conchúr White, Christopher Harbinson, Brendan White, Jonathan Downing and Michael Keyes produce grand, melodic music that has been compared to Coldplay, Jeff Buckley and Death Cab For Cutie.

Having been together for just under a year and a half, they can’t believe that they are part of such a huge campaign.

Frontman Conchúr White said:  “It hasn’t really sunk in yet, it still seems a bit surreal. We didn’t expect to get such a reaction and we’re hoping to get good exposure both at home and in China. Whatever happens though, it will be a great story to tell!”

So far, Silences are proving to be the most popular in the campaign, with their song The Sea, achieving the ‘most likes’.

For 24-year-old Conchúr, who comes from Portadown in Co Armagh, that is quite an accolade.

He said:  “There’s loads of bands involved that I really admire and look up to — I really like the music of people such as Temples and Hannah Lou Clark, so to even be amongst them is an honour, but to be named the most popular is a real bonus. I guess the Chinese audience like our music as our songs are quite melodic and you don’t necessarily need to understand the lyrics to enjoy them.”

“It would be great now for us to be able to capitalise on this and see the campaign on the ground. We would love to be able to do a small tour of China at some point as we’ve never played that far from home before.”

Silences have come a long way since their inception just over a year and half ago, when Conchúr started the band as a solo project shortly after graduating from Leeds University.

So apart from world domination, what does the next year hold?

Conchúr said: “We’re just back from playing The Great Escape Festival in Brighton, so we would like to build on that and what we’ve got going on in Northern Ireland. The song in this campaign, The Sea, involved Tourism Ireland in the making of the video. “

“Currently we’re in the midst of planning our third EP and we’re hoping to organise a UK tour to coincide with the release. Before that we’ll be playing at Electric Picnic for the 2nd time.  We’ve also just signed a deal with the Music Service, Secret Road in LA – which pitches songs to big US shows like Grey’s Anatomy and Pretty Little Liars — so it’s all very busy, but exciting.

“It’s been incredible so far and now with what’s happening in China, you never know where we could end up.”

UK Music on The Go is an initiative of British Council’s radio station, The Selector. Selector Radio brings the best of new UK music to the world once a week on behalf of the British Council with an estimated audience of three million listeners. Presented by Goldierocks (Sam Hall) The Sunday Times cited the show as “More irresistible as the best of John Peel… the country’s coolest radio show.” For more information on Selector visit http://music.britishcouncil.org/the-selector or follow on Twitter: @SelectorRadio.