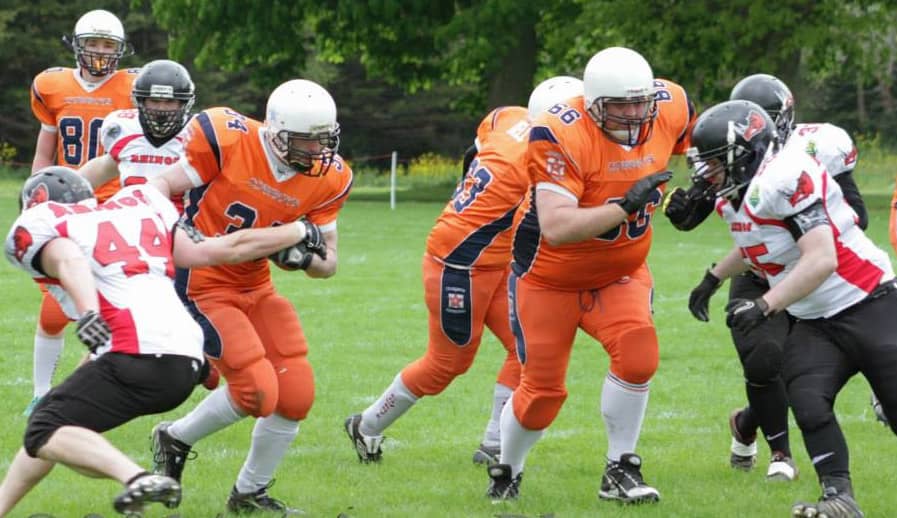 The Cowboys got their season up and running on Sunday with a solid road victory for the Rhinos from Dublin, the visitors started off in blistering form and took the lead from a John Murray 40 yard run after the Offensive Line carved open huge running lanes for the Running Back. The Cowboys extended their lead with QB Conor Fearon linking up with Peter Loughran in the End Zone from 20 yards.

After some big running from Mark Hill to open up lanes Murray notched up his second Touchdown of the day when the Cowboys ran an impressive fake play that freed up Murray to twist his way to the End Zone from 60 yards out, a seriously well worked move involving the whole offence and showing the great individual running talents of Murray.

The Cowboys ended their scoring for the day when Safety Tom Neal collected a deep pass and ran the interception the whole way to the End Zone with the help of Lee Mustoe and Johnny Martin making key blocks downfield.

A potential break out game for the Craigavon ‘Boys who have came through a tough start to their 2014 schedule but with this W on the board they feel they can move on and push for a better record with playoff hopes still well within reach.

The Cowboys welcome the Dublin Rebels next to Chambers Park on 18th May 2014.