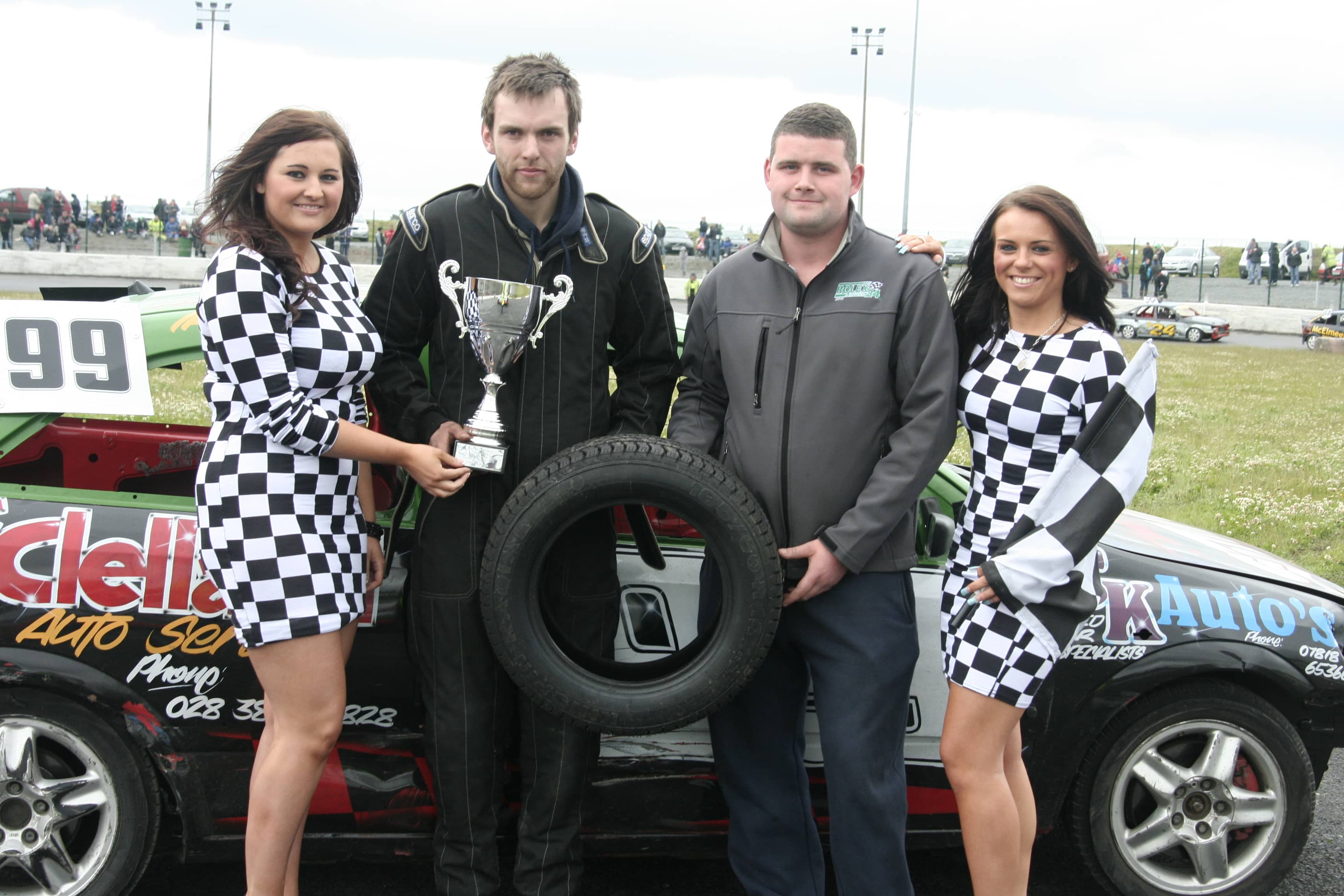 A huge number of drivers across ten different classes raced over the two days, producing excellent action for the large crowd on hand.

The National Bangers were the main focal point of the weekend, with a huge field on hand on Saturday night for the 2L Irish Open Championship. Northern Ireland, the Republic of Ireland, England and Scotland were all represented on the grid, and amidst the action and carnage Dublin veteran Mark Hughes surged through to take the title in commanding style ahead of Steven Reynolds and Anto Finnegan. Jamie McAngus then took the Allcomers win for England ahead of Stevo McGrath, before a fine Destruction Derby saw Finnegan just stop Hughes in his tracks to take the trophy. The Entertainer of the Day award deservedly went to Marty McKiernan, whilst the Best Presented Car award went to England’s Liam ‘Lossy Jnr’ Hide.

On Sunday it was the turn of the Unlimited National Bangers, and whilst thy lacked the outright numbers of the 2 Litres, the big cars went on to produce three excellent encounters. The Irish Open title decider became a race of attrition almost, with just two cars going the distance. Chris Hide took the title back across to England for the second successive year following Mike Kilford’s 2012 win, with top local exponent Steven Reynolds his runner up. Hide then doubled up by taking the Allcomers race too, this time ahead of Steven Bolton, before his son Liam Hide grabbed the Destruction Derby  victory in his Jaguar. Belfast star David Owens took the Best Presented Award, with Willy Ogilby crowned Entertainer of the Day.

In their last meeting before the World Championship at Ipswich, some expected the 2.0 Hot Rods to be lacking their usual buzz, but how wrong they were! There was drama right from the off as the first two across the line in heat one, Philip Beatty and Adam Hylands, both found themselves docked positions for illegal contact during the race, handing victory to British Champion Shane Murray. Worse was to follow for Beatty, when as he battled into the lead in the second heat he found himself disqualified, once again for persistent contact. This allowed Stephen Emerson to take the win over County Waterford’s Pat Casey.

The final turned into an enthralling race, with nothing between the premier runners over the last few laps. Young Bobbie Johnston took the chequers, but he was then sensationally excluded for a tyre irregularity. This elevated Dungannon’s Irish Champion Derek Martin to victory lane, and an important morale boost as he heads off to Ipswich next month in search of the World title. Murray ended up in second ahead of Hylands.

The young starlets in the Ninja Karts yet again produced a trio of top races, and once again Ballymena’s Adam McFall shone through to land his second final victory in as many weekends. He stole through following a late race stoppage to take the win over Jack Hazlett and Adam Weir, after Weir and Niall Cregan had earlier taken heat victories

Saturday evening saw a somewhat depleted field of Stock Rods in action, but as ever the racing was ultra competitive and close. Stephen McCready made good his downgrading to the blue grade to land the victory in both heat races, heading home young Marc Morrell in both. The McKinstry Skip Hire-supported feature race final saw the star men shine through, and it was former British Champion Raymond Harper who worked his way ahead to take the win over early season sensation Jonny Cardwell and Morrell.

The young drivers in the Junior Productions on many occasions put the older generations to shame, and once again on Saturday night they put on three excellent encounters with little to choose between all the big names. Edmund Davis added another win to his collection in heat one ahead of Bradley McKinstry, before Bradley went one better to take the flag in heat two ahead of Ethan Dilly. The final saw a number of dramatic incidents, none more so than the leader Dean McCrory’s dramatic rollover late in the race. That enabled McKinstry to take the trophy sponsored by his family’s company, with Davis and Jordan Robinson his placemen.

The ProStocks again mustered a huge field, with 34 coming under starter’s orders during Sunday afternoon’s meeting for the second round of the GH Tyres Supreme Series. Lurgan’s James Litter headed home Irish Champion Stefan McClelland, from Portadown, in the first heat, before novice grader Adam McCready took a well deserved first ever win in heat two ahead of Dean Fleming.

The closed grid final for the second round of the GH Tyres Supreme Series saw McClelland get an early jump on Litter who gave it everything as he tried to hit back. He couldn’t quite get back on terms with the Irish Champ though, and, as Stefan powered to yet another quality win (pictured receiving his trophy), Litter succumbed to immense pressure from Fleming in the latter stages and had to settle for third in the final analysis.

The Banbridge-based Grattan Family proved unbeatable in the Superstox racing on Sunday afternoon. Denver took first blood by grabbing the win in heat one ahead of Jonny Murdock, before his brother Gary took over by taking the flag in both heat two and the DGH Services-sponsored feature race final. Denver chased him home in both events, with returnee Noel Beattie rolling back the years with third in the big race of the day.

In only their third ever meeting at Tullyroan Oval, the Rookie Bangers again produced a healthy entry and three very enjoyable races. Stephen Clarke was the man on a mission in heat one, heading home Gav Mulvey and Paul O’Connor to the flag. Points leader Davy Connolly produced a fine drive to take the second race of the day over Clarke, before Stephen hit back when it mattered most to take the honours in the final. Mulvey and O’Connor chased him across the line in the feature race.

Irish Champion Ian Bolton was victorious in both Reliant Robins heats, but his treble bid in the final was thwarted allowing John Stewart to come through to land the win. It was Stewart’s first ever trophy win in what is his first ever season of Robin racing. Clint Murray and Jamie White were the placemen

Racing continues at Tullyroan Oval on Saturday evening, June 29, with the final meeting before the July break. The Junior Productions take centre stage for their 2013 Tullyroan Challenge Cup whilst the Superstox contest the second round of the NIOvalTV Series. Also in action will be Lightning Rods, Stock Rods and Open Hot Rods, with the first race leaving the grid at 6.30pm.