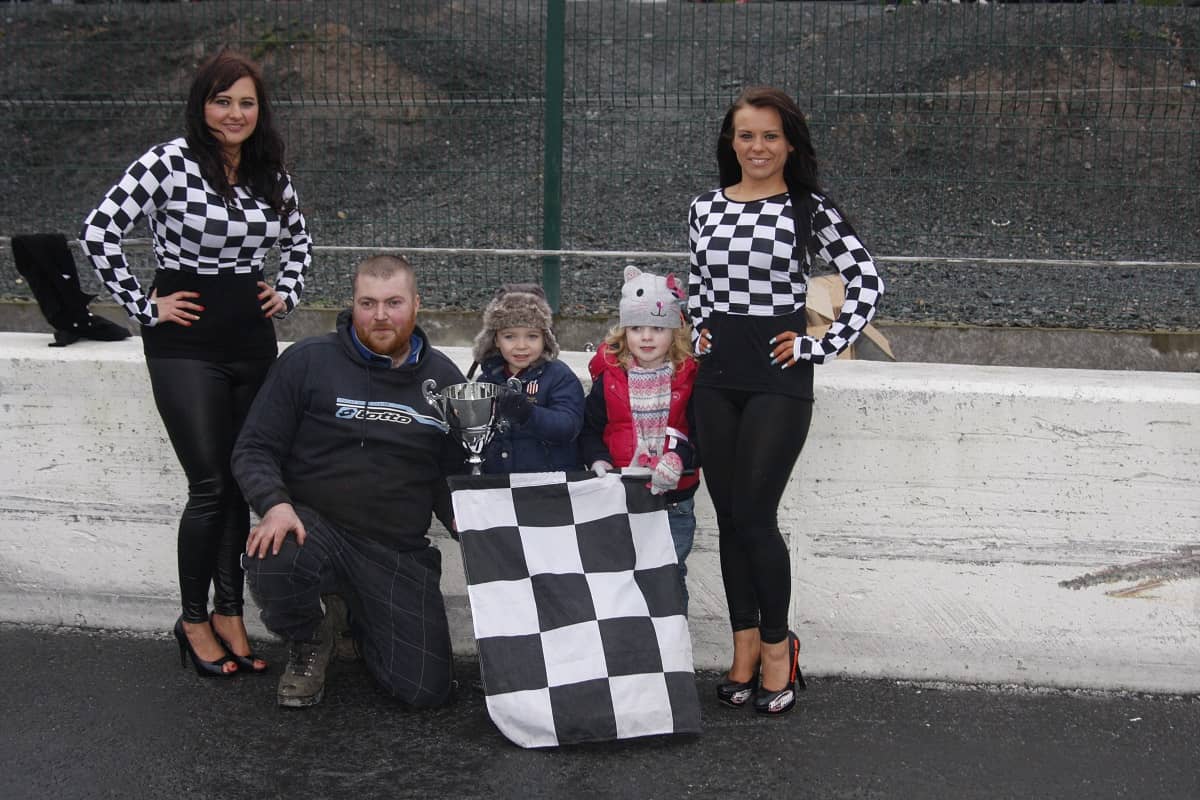 Birches ace Dave Haugh was the star of the Big Van Bangers at Tullyroan Oval on Sunday afternoon, winning the ‘Van-dalism 2013’ title on a day when some red hot action warmed up the race fans on a bitterly cold winter’s day. Ian Bolton was another celebrating, as he took his fifth Irish Championship crown in the Reliant Robins, whilst other feature race wins fell to Nigel Jackson (Lightning Rods), Conor McElmeel (ProStocks) and Edmund Davis (Junior Productions). An impressive field of Vans took to the circuit for their annual outing, and as expected there was carnage galore as they all got well and truly stuck in. Irish Banger Champion Steven Reynolds from Dublin was the early leader in the ‘Van-dalism 2013’ feature race, before he was brushed aside by Dave Haugh. The local man is quite a specialist in the van races, and he sped home to take the chequered flag in some style. Portadown driver Lee Johnston, usually seen behind the wheel of a Stock Rod, took an impressive second on his Banger debut, with Steven McGrath in third.

A huge pile-up on turn two was the highlight of the Allcomers race, as it was left like a breakers yard such was the number of crippled and destroyed vans littered on it. Jonny Winter from Loughgall took the flag in what was a race of attrition, before a superb Destruction Derby fell to Dubliner McGrath. Willy Ogilby took the trophy for wreck of the day, kindly donated by fellow racer Adrian McKinstry.

The 2013 Irish Championship was the main event of the day for the Reliant Robins, lined up in order of points scored during the year. Four times previous champ Ian Bolton set off into the early lead, with one of the best turnouts in some time chasing in his wake. Billy McClean was tracking his every move though, and after a mid race caution McClean moved ahead to take up the running. Another caution, when Stock Rod ace Micky McFall rolled his machine on the back straight, allowed Bolton to muscle his way back to the front as McClean slowed into retirement. That allowed Bolton a clear run home, as the Ballymoney man crowned himself King of the Robins with his fifth Irish title win. Clint Murray and John Stewart were his placemen after a great event indeed. Bolton then repeated the dose in the Revenge race, taking the win from the very back of the grid.

The tricky on-track conditions were a handful for the rear wheel drive Lightning Rods, but Portadown’s World Champion Nigel Jackson showed his class with a faultless drive in the final. Earlier Winston Weir and Vince Litter grabbed the heat wins after excellent drives, but when conditions were at their worst Jackson proved superior. Nigel has always been known for his wet track prowess, and in a storming drive from the rear of the grid he chased down long time leader Weir. Winston could offer little resistance to a man who is right at the top of his game at the moment, and the gold roof of Jackson took the chequered flag for a commanding win. Weir and Ben McKee filled the podium places.

Another excellent turnout of ProStocks provided three entertaining races, with local driver Lee Wylie claiming victory in both heats. An automatic upgrade to yellow top hindered his progress in the final though, leaving Conor McElmeel to power through the puddles to victory. Stephen Boyd was a gallant runner up, with Stock Rods NI Champion Raymond Harper third in a guest drive in Jamie Rea’s car.

A smaller than usual turnout of Junior Productions took to the raceway, and after Edmund Davis and Robert Mawhinney shared the heats, it was Davis who took the Cirrus Plastics sponsored final win with Mawhinney the runner up. Teenage sensation Edmund Davis took the final honours in the Junior Productions at Tullyroan Oval. Here he is presented wioth the Cirrus Plastics trophy by Callum and Jessica Doak, as Tullyroan girls Paula and Haley look on.