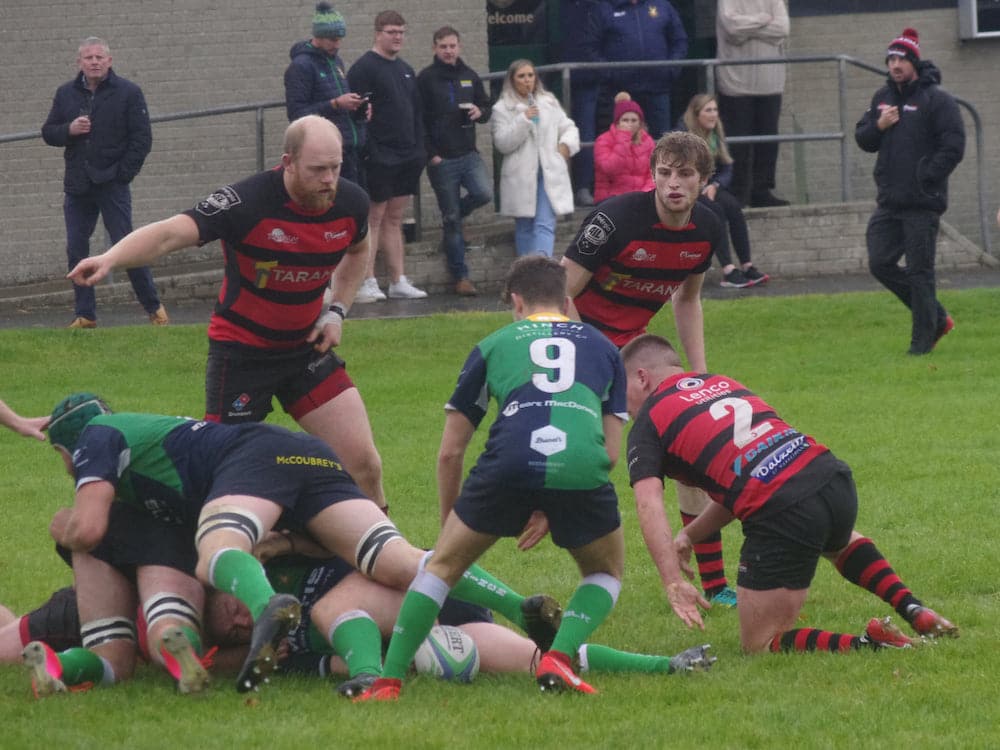 Conditions were wet at Ballymacarn Park on Saturday when City of Armagh kicked off in their second fixture of the Energia Community Series.

The home side were without their Ulster contingent of players while Armagh had a number of players missing through injury.

The visitors started off brightly and had a good spell in Hinch territory. The home side strayed offside on 12 minutes and Cormac Fox popped over a straight-forward penalty to open Armagh’s account.

The lead however was short-lived as Hinch were awarded a penalty two minutes later and outhalf Gregg Huntley levelled the match at 3-3.

Both sides tested each other’s defences and both held firm. The visitors were transgressing in the eyes of the referee however with eight penalties conceded in the opening 30 minutes. Continuity was therefore difficult and it was no surprise when Huntley edged his side ahead at the half hour mark.

Armagh full-back Shea O’Brien won the restart and set up an attacking platform. From halfway, centre, Evin
Crummie broke the defensive line and passed to the supporting Neil Faloon on the 22. The big number 8
showed great pace and strength to reach the tryline despite the attention of two 2 defenders. Fox converted
the try and City of Armagh were back in the lead at 6-10.

Armagh finished the half strongly and had an attacking lineout in the Hinch 22. The home back however managed to create a turnover and cleared the danger as the whistle blew for halftime.

The second half commenced with Ballynahinch gaining an early foothold in the Armagh 22. The visitors
knocked on at a lineout and from the scrum, the Hinch pack set up a series of pick and drives to the Armagh
line. The ball was then moved wide to the left wing and Aaron Cairns was adjudged to have touched down in
the corner.

Spectators from both sides agreed the ball had been dropped over the line. Hutley then stepped up and kicked a great conversion from the touchline which went in off an upright and Ballynahinch were
ahead 13-10.

Armagh had a let off from the restart when another Hinch penalty was kicked long into the Armagh 22 but
the ball went dead.

From the resulting scrum, Armagh went through some attacking phases but a knock on let Hinch counter attack and their fullback chipped ahead but O’Brien dotted down for a 22 drop out.

Ballynahinch looked to increase their lead when second row Bradley Luney broke free from the halfway line
and made 50 meters up to the Armagh line. A penalty for not releasing let Armagh off the hook and the
danger was cleared. Armagh captain, Timmy McNeice then made good ground on the right wing and kicked
ahead, deep into Hinch territory.

Following a lineout, Matthew Hooks made a great break into the Hinch 22 and passed to the supporting Charlie Worth to score close to the posts. The young scrum half was making his senior Armagh debut and was only just on the pitch having replaced Alex Johnston. Fox missed the conversion but Armagh were now ahead 13-15.

Another debut was then given to Ryan Finlay and the former Royal School player fitted seamlessly into the pack.

On 60 minutes, the home side were penalised for off side but Armagh lost their lineout on the Hinch 22.
Hooker, Jack Treanor did well to force a turnover but the visitors were then penalised again in mid-field.

Another defensive lapse saw Ballynahinch make 40 metres from an Armagh lineout on halfway but a knock
on let the Orchard County side clear the line. Ballynahich stepped up the pressure but a solid Armagh
defence kept them at bay. A Hinch knock on gave Armagh a scrum 30 metres in front of their posts. The
referee then penalised an Armagh prop with Hutley kicking the penalty to put his side back into the lead 16-15.

Armagh introduced Kyle Faloon from the bench as the match entered the final ten minutes. The visitors stole
a Hinch lineout on halfway but another attack was thwarted by conceding a penalty. A quick tap saw Ballynahinch take play up to the Armagh 22 and another tap penalty gave the home side great momentum.

The ball was moved to the right wing where the defence was stretched and winger Ben McMullan crossed
for an unconverted try. The scoreline was 21-16 with 5 minutes remaining. Could the Armagh side repeat their exploits from the Ulster Senior Cup Final when the two teams last faced each other? An exciting finale did indeed materialise. A penalty to Hinch in their 22 repelled an Armagh attack but a
crooked lineout gave Armagh possession.

The visitors then knocked on giving Hinch a scum but amazingly Armagh took this against the head and drove Hinch backwards. O’Brien and Worth then took play up to the Hinch line where Neil Faloon was stopped just short. Hinch killed the ball and a yellow card produced.

From the scrum, Armagh drove forward but surprisingly let the ball out and Worth failed to get over the
whitewash. The ball was recycled to Cormac Fox who was the recipient of a high tackle. Another yellow card
was produced to the Hinch hooker and from the penalty, Armagh elected for a scrum.

Ballynahinch then requested an uncontested scrum. Faloon picked up and the Armagh pack drove for the line.

A try was awarded deep in injury time when flanker Barry Finn burrowed over under a pile of bodies. The conversion was needed to secure victory and Cormac Fox made no mistake this time. The final whistle
blew and City of Armagh had won a thrilling match by the narrowest of margins, 21-22.

With two victories from two in the Energia Community Series, Armagh Head Coach Chris Parker was delighted with the result.

“This was not a good performance by our team, the error count and number of penalties conceded was horrendous,” said Parker.

“We still need to improve in quite a number of areas. On a positive note, the boys that stepped up performed well and showed great spirit fighting to the final whistle for the win.”

Next up for City of Armagh is a home fixture on Saturday to neighbours Banbridge.