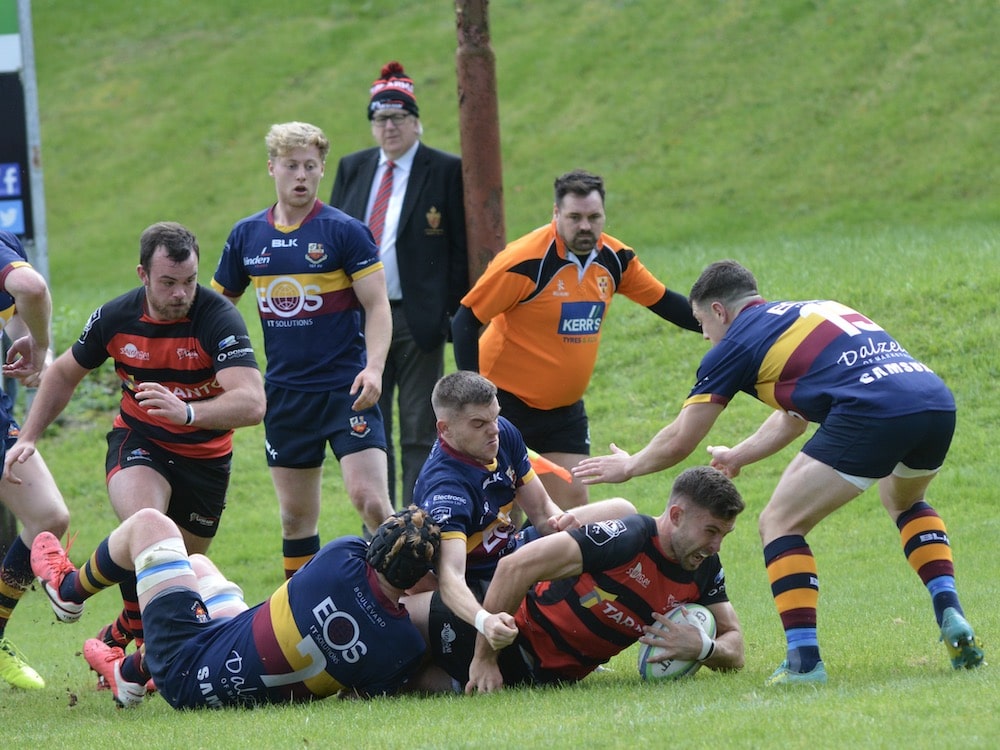 Michael Hooks scored two tries for the home side

Unbeaten City of Armagh hosted neighbours, Banbridge in the Energia Community Series at the Palace Grounds on Saturday.

Banbridge kicked off in dry, sunny conditions but it was Armagh who got off on the front foot. A penalty was dispatched into the visitor’s 22 and after securing possession, the Armagh forwards drove for the line.

With a penalty advantage, outhalf, Cormac Fox put in a crossfield kick which winger, Matthew Hooks latched on to, touching down for the game’s opening try with five minutes on the clock.
Fox converted superbly from the touchline and Armagh were ahead 7-0.

From another Armagh attack, Banbridge turned over possession on their 10 metre line and took play into Armagh territory.

A missed tackle let Banbridge burst through into the 22 and Andrew Morrison took a scoring pass to touch down in the corner with 10 minutes played. A fine conversion from Adam Doherty tied the match at 7-7.

Armagh were then stunned with a second Banbridge try two minutes later. The visitors took possession from the restart and moved the ball across their 22 where an overlap resulted in Robin Sinton sprinting 70 metres to score out wide. Doherty converted and suddenly Banbridge were in front 7-14.

Following the restart, Armagh kicked a penalty into the visitor’s 22 and set up a catch and drive from 5 metres out. The Banbridge pack however defended the maul superbly and won a turnover. From the clearance, Armagh’s McNeice countered strongly and Crummie put in a neat grubber kick but a 22 drop out resulted. The drop out kick went out on the full, giving Armagh a great attacking scrum position.

The home team attacked strongly in the Bann 22 but the visitor’s defence held firm. From a penalty for a high tackle in front of the posts, Armagh elected for a scrum. This backfired when the Armagh front row were penalised for collapsing and Bann cleared their line.

A good spell of possession for the visitors led to a good attacking move, but a knock on saw Armagh counter from their 22.

A penalty for Bann resulted in a lineout on the Armagh 22 but a crooked throw gave Armagh possession. The home side then messed up their exit and Banbridge seized possession to launch another attacking wave. A knock on from the visitors saw the pressure on the home side relieved temporarily.

Armagh then bizarrely took a quick tap penalty on their own 10 metre line and gave away a penalty at the subsequent ruck for holding on. Banbridge accepted the gift and Doherty kicked for three points to stretch the visitors ahead 7-17 with 35 minutes played.

The home side then had an attacking spell in the Bann 22 with another penalty setting up an attacking lineout. Jack Treanor broke from the maul but was stopped short of the line. The visitor’s defence held firm as Armagh went through several phases.

A high tackle on Evin Crummie saw a yellow card produced to a Bann second row and the home side again elected for a scrum. Scrum half, Alex Johnston moved the ball left and Crummie made a half break. Matthew Hooks got his hands on the ball and managed to stretch over the line for his second try of the game. The successful conversion from Fox reduced arrears to 14-17, as the whistle blew for the interval.

The second half commenced and Banbridge centre, Jude Postlewaite made a break from his 22 deep into Armagh territory. A penalty at the breakdown allowed Armagh to set up another attacking position but an over-thrown lineout saw the opportunity lost.

Bann then had the opportunity to score again when another penalty set up an attacking lineout 10 metres from the Armagh line. The Banbridge pack secured possession and set up a driving maul, however a knock on let Armagh off the hook.

The home side then had a chance to attack with a lineout on the Bann 22 but another set piece malfunction let the visitors clear the danger. A scrum penalty was awarded to Bann but the visitors then lost their lineout as errors from both sides crept into the game.

Armagh’s Charlie Worth entered the fray on 60 minutes but another promising attack was thwarted with a penalty conceded at the breakdown.

Banbridge then had a great chance for a try on 65 minutes with their powerful pack driving for the line. Desperate Armagh defence held out, as the final pass from Bann went into touch. The pressure paid off for Bann on 66 minutes when Postlewaite chipped ahead on the Armagh 22 and won the race to touch down for a try converted by Doherty.

The visitors were now in command at 14-24 with 15 minutes remaining. Winger, Kyle Faloon came off the bench as Armagh had to throw caution to the wind.

A series of attacks looked to unlock a well-organised Bann defence. On 75 minutes Banbridge transgressed on their 22 and with Postlewaite off to the sinbin, Cormac Fox kicked 3 points to earn his side a potential losing bonus point at 17-24.

With the match now in injury time, Bann attacked on the blindside from a scrum but a knock on gave Armagh possession. Neil Faloon took the ball forward and Fox moved the ball in field where Kyle Faloon entered the line at pace and cut through a tired Banbridge defence to score from 50 metres out. Fox popped over the conversion and Armagh had tied the match at 24-24.

The final whistle sounded and remarkably for the second week running, City of Armagh had scored deep in injury time. The team had played their ‘get out of jail card’ to get a share of the points and remain top of the Community Series league table.

Head Coach Chris Parker was relived post-match and commented: “Banbridge worked harder than us today, made less errors and probably deserved the win.

“However hats off to our lads, despite not being at our best, we stayed in the game and got a share of the points which looked unlikely with ten to go. We will go away and review the performance and look to improve in some obvious areas of the game that let us down today.

“This week we travel to Belfast to play Queens and that will be a massive test. They have started the season very well and we are looking forward to the match.”