Eight wins in a row for rampant City of Armagh 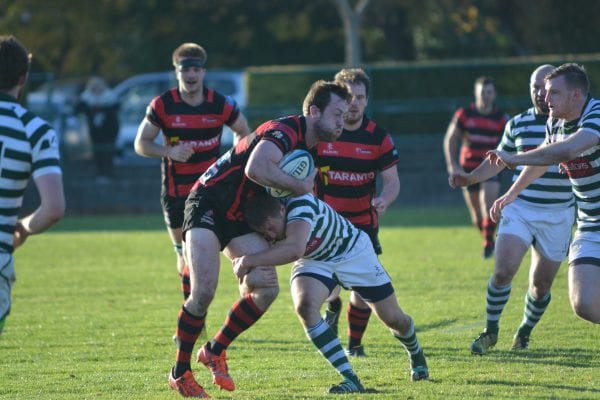 Saturday saw the top two teams in Division 2B meet at Dr Hickey Park for a top of the table clash.

Last season saw one point separate both teams over two matches with Greystones winning 17-16 at home and the match in Armagh finishing all square at 15-15.

A close encounter was on the cards and a huge crowd of supporters gathered in anticipation.

Many would be heading to the Aviva Stadium afterwards to cheer on Ireland and Rory Best in particular, in his centenary game.

Armagh were able to welcome back team captain Ali Birch who had been on holiday, while Harvey Young and Daryl Morton had recovered from injury to make the subs bench.

Greystones kicked off in perfect conditions with strong sunshine unusual for November. The home team exerted early pressure in the Armagh 22 and were soon rewarded with a penalty which Andrew Kealey converted for a 3-0 lead. The first quarter was evenly balanced and it was not until the 18th minute that Armagh got on the scoreboard when outhalf Cormac Fox kicked a penalty to level matters at 3-3.

The advantage then swung to Greystones when Armagh’s James Morton received a yellow card for a high tackle, however the home team were unsuccessful with the penalty kick. Fox then put Armagh ahead 3-6 when he converted his second penalty on 23 minutes.

A minute later the game sprung into life when Armagh’s Birch stole a lineout on the halfway line and sprinted down the wing to touchdown in the corner for a superb individual try and the visitors led 3-11.

Ten minutes later, the home team were rocked again when Armagh scored a second try. A superb cross-field kick from Fox was caught by full-back Timmy McNeice on the burst and he crashed over for an unconverted try. A further penalty from Fox stretched Armagh’s lead to 3-19 and the visiting supporters were delighted as the halftime whistle went.

The second half started with Armagh continuing to dominate the early stages and Greystones conceded another penalty for Fox to put Armagh further ahead 3-22.

The expected fight-back from Greystones then kicked in and the home team stunned Armagh with two tries in three minutes. Conor Pearse got the first and substitute Feria Kenny got the second which was converted by Kealy and Greystones were right back in contention with the scoreline now 15-22.

The home team were playing with confidence and only a try saving tackle from McNeice prevented Greystones leveling the match.

The home supporters were disappointed however when Fox kicked his sixth successful penalty to stretch Armagh’s lead to ten points and the final whistle went with Armagh victorious 18-28.

A hard-earned victory for City of Armagh makes it eight wins from eight matches in the All Ireland League and a nine point gap has opened at the top of the table. Coach Alex McCloy, hesitated to award a man-of-the-match to a single player but decided to nominate Phillip Fletcher as forward of the day and Timmy McNeice as back of the game.

The pressure is back on Armagh to keep the winning run going and the team faces another difficult hurdle this Saturday when third place Wanderers are visitors to the Palace Grounds.

Captain Ali Birch made a strong comeback to the team.