City of Armagh suffer defeat at home to Bruff 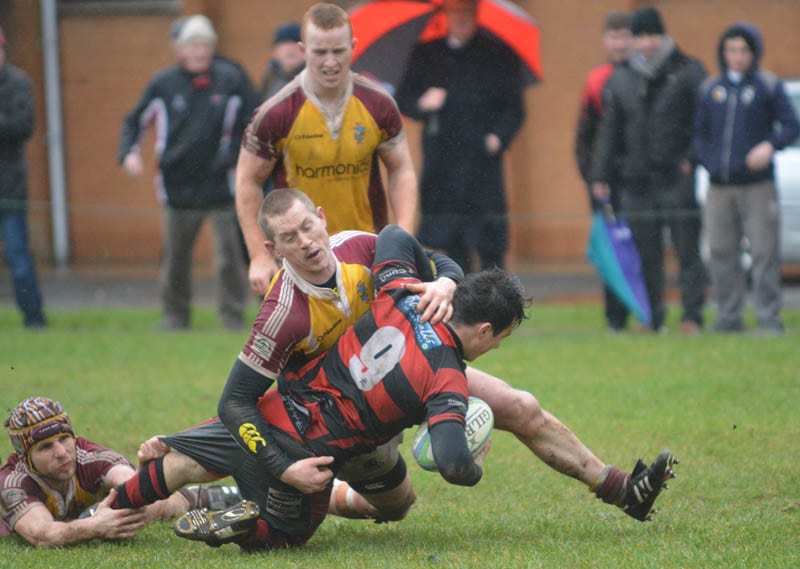 Armagh played their twelfth game of the season in the Ulster Bank All-Ireland League when they entertained Bruff at the Palace Grounds on Saturday.

Having narrowly won their last two league games against Boyne 18-20 & De La Salle Palmerston 12-17 Armagh were keen to get back into their match winning form shown at the start of the season.

Armagh had recently camped in the third league spot and coach, Andy Hughes, was fully aware that the side had to accumulate as many league points as possible before the All-Ireland leagues are re-structured for next season.

Bruff had been relegated from section 2A at the end of last season and were seen to hold mid table positions from the start of this season.

Saturday’s weather was seen to deteriorate as the day went on and at the kick-off the morning’s drizzle had turned to a heavy downpour.

Armagh kicked-off with a stiff breeze at their backs. A carbon copy of last week’s game in Boyne resulted. Within 5 minutes the side with the second best league defence had been breached!

A fine try in the left corner left the home side reeling only to see the Bruff scrum-half land a difficult conversion against the breeze. Five minutes and already seven points down was definitely not the way to accumulate those vital league points! Armagh’s Harry Doyle gets stopped by the sound Bruff defence

Eventually the Armagh side began to get into their stride and began to win set pieces but this failed to show any results as numerous handling errors showed how unsettling the dreadful start to the game had knocked the home team off their form.

The one and only consolation Armagh experience in the first half was a beautifully taken penalty kick from Andrew Magowan to attain their only three points of the game.

Coach, Andy Hughes, had some harsh words in his half time team talk but even these encouragements failed to inspire Armagh as they continued to flounder their attacks against an ever more confident Munster side.

It wasn’t until the dying minutes of the match did Armagh show their real metal. For the last ten minutes Armagh pinned Bruff in their ’22’ but time after time they failed to touch down by the slimmest margins.

The game ended with Bruff clinging on to their four point lead and as the final whistle blew they celebrated in vocal style.

This poor performance slipped Armagh from their third place down to fifth league spot. Unfortunately it places even more pressure on the players to re-establish a top four league position at the close of the season.

Next week sees the side travel to Sligo. Again Armagh simply must improve in all aspects of the game. Perhaps if the team is a little more patient during the game they may return to winning ways.