The Armagh side face league leaders Malone next weekend 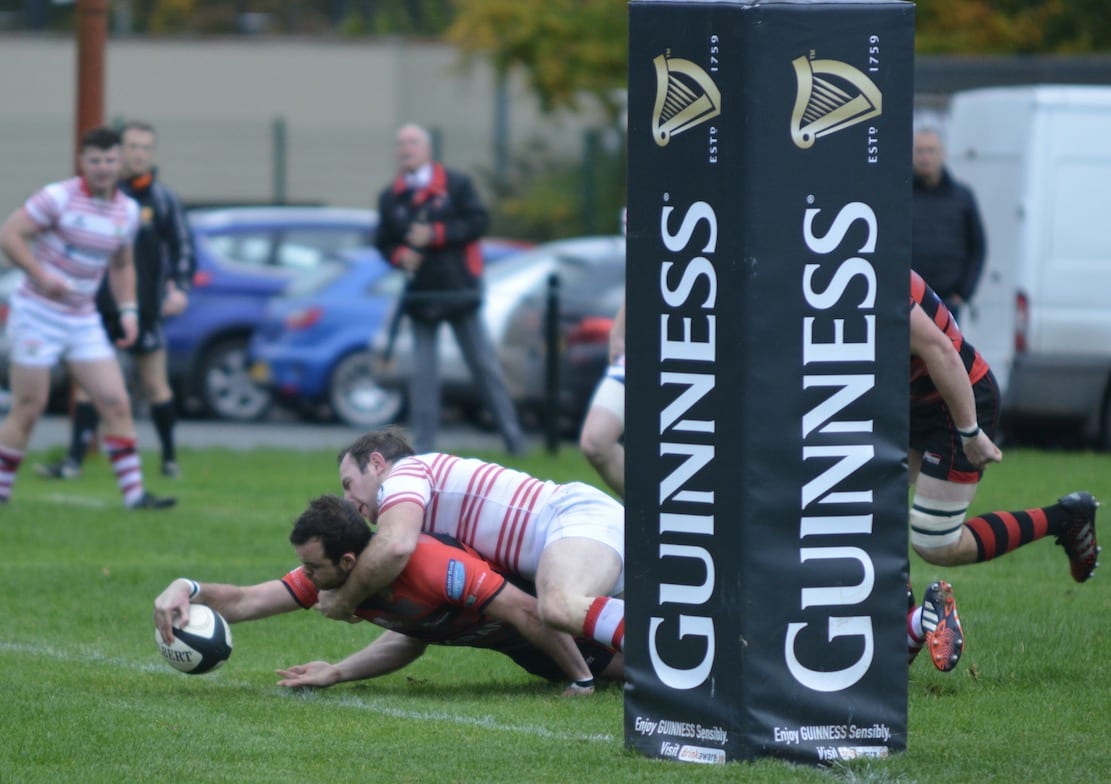 In a classic encounter at the Palace Grounds on Saturday that epitomised the game of two halves, it was the visitors Nenagh Ormond who stung the home team with a last minute try to take the spoils 32-38.

City of Armagh played their best rugby of the season to take a 29-3 lead as half-time approached against a high flying Nenagh side, in second place in the league.

Nenagh then scored in added time to make the halftime score 29-10 and Armagh’s lack of experience at this level came to the fore in the second half.

Armagh kicked off in perfect autumnal conditions and took possession when Nenagh kicked out of defence.

With only two minutes on the clock, centre Chris Colvin crossed under the posts for Armagh’s opening try. Cormac Fox kicked the simple conversion and the home team were off to a dream start.

A penalty from the restart however gifted the visitors three points and Nenagh Ormond then had a spell on top, testing the Armagh defence with strong running by their backline.

From a scrum in the Armagh 22, full back, Chris Cousins, making his All Ireland League debut, sent winger Andy Willis clear, but a last-gasp tackle prevented a second try for Armagh.

On twenty minutes Armagh did get their second try when a missed tackle on Ali Birch saw the flanker touch down for Fox to convert, putting the home team 14-3 ahead.

The Armagh team were playing some terrific rugby and less than 10 minutes later scored their third try following great enterprising play between backs and forwards for centre John Faloon to finish off the move and Fox nailed his third conversion of the game.

The home team continued to dominate and Nenagh were not allowed to settle into any rhythm. On 32 minutes, Fox kicked a thirty-metre penalty to stretch Armagh’s lead to 24-3.

Nenagh found themselves pinned back in defence and on 39 minutes Armagh achieved their bonus point score when prop Daryl Morton crashed over the line for an unconverted try and a 29-3 lead.

In added time Armagh spilt the ball on halfway and Nenagh centre, Coffey scooped up the loose ball and ran fifty metres to score under the posts despite three would-be tacklers.

The conversion gave Nenagh a glimmer of hope as the half time whistle went with the scoreline 29-10.

The Munster men got a grilling at half time and it was the visitors who started the second half on the front foot with a try after two minutes by winger O’Gorman. Outhalf Stewart converted to make the score 29-17.

The Nenagh fightback continued with their forwards now driving hard at the Armagh defence. A five-metre scrum to the visitors put them in a great position and the referee awarded a penalty try when the home pack went down in the first set.

With the score now 29-24, Nenagh sensed a mighty comeback was on the cards, similar to their win at Queens a few weeks previously.

The Armagh side were a pale shadow of the team in the first half and the visitors were playing with confidence. Clayton Stewart, their influential out half made a fifty metre run and Robbie Faloon was sent to the sin bin when he killed the ball.

The comeback was complete on 55 minutes when Nenagh cut through the Armagh defence with ease to score under the posts to take a 29-31 lead and leave the home supporters stunned.

With 20 minutes still on the clock, Armagh had chances to rescue the match. Fox attempted a 45-metre penalty which was narrowly wide but the young out-half made no mistake from thirty metres five minutes later and he edged the home team back into the lead by the narrowest of margins, 32-31.

On 70 minutes Fox was asked to kick a 50-metre penalty to give the home team some breathing space on the scoreboard but the kick just fell short.

Armagh then had their best spell of the second half and pinned Nenagh in their 22 as the match entered the closing stages.

Good forward driving brought play right up to the Nenagh line and an Armagh score looked likely until the referee penalised an isolated Armagh forward for not releasing and Nenagh escaped.

Showing typical Munster spirit the visitors went straight down the pitch looking for a winning score with a minute left to play.

They turned over Armagh possession and spread the ball wide for their unmarked winger to cross in the corner. To rub salt in the Armagh wounds, Stewart kicked a superb conversion from the touchline and the final whistle went with the visitors winning a thrilling match 32-38.

City of Armagh received two points for their efforts on the day, dropping them to fourth place in the league table.

After the match, the Armagh coaching team said they would take positives from the team’s first half performance and take lessons from the contrasting second half.

This Nenagh Ormond team has much more experience at this level and our guys need to learn they can’t relax at all in this league or they will be punished.

Armagh now faces a massive challenge on Saturday when they travel to Belfast to play league leaders Malone.

The coaching team will be looking for errors to be cut out this week as undefeated Malone will be keen to win this Ulster derby match.