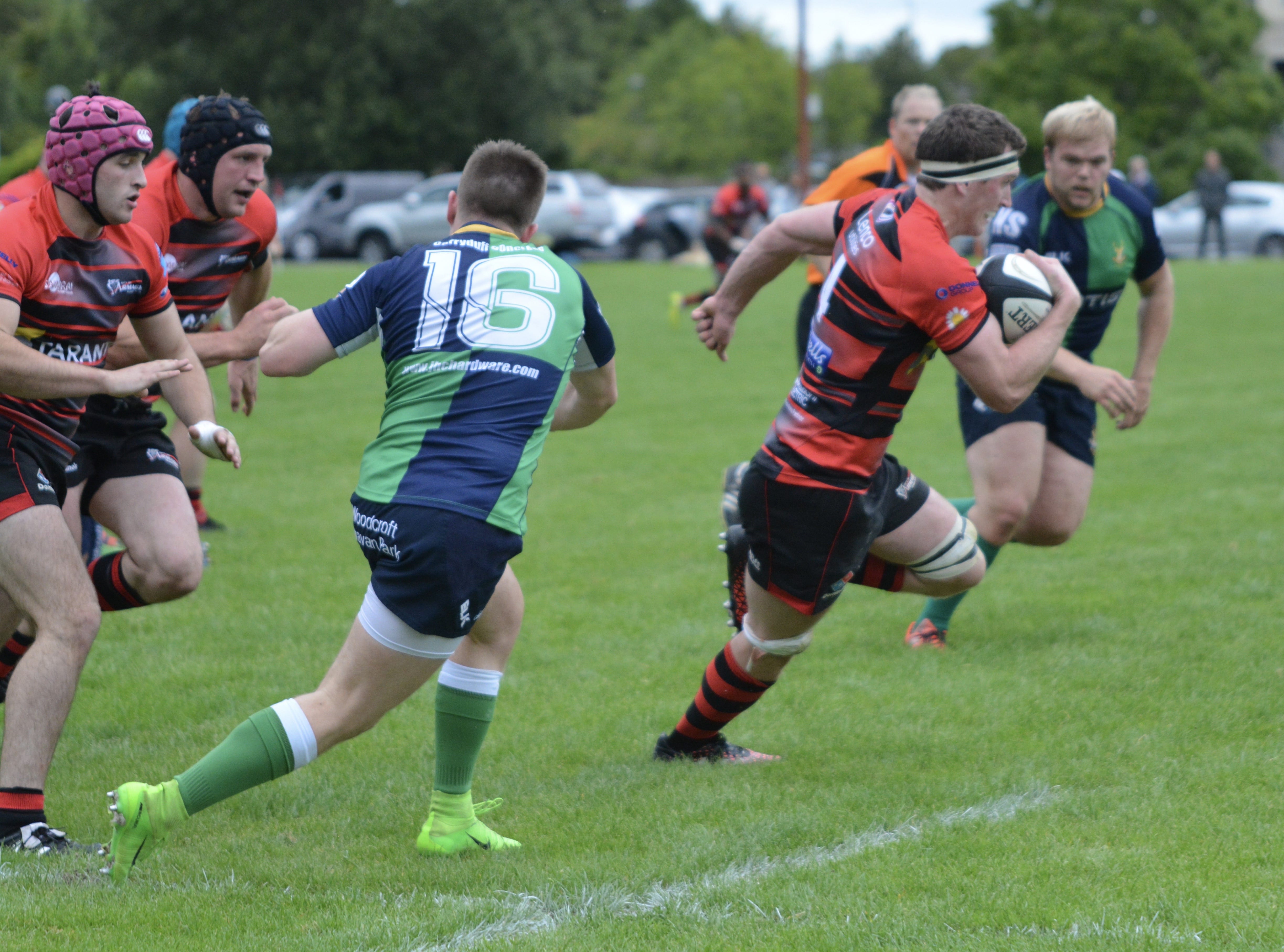 Armagh’s man-of-the match David Whitten breaks through the Ballynahinch defence to score at the posts.

Armagh played the first game of the the 2017-18 season when they entertained Ballynahinch at the Palace Grounds on Saturday afternoon.

This was the first chance the team had to defend the SONI Championship which they won last season for the first time in the Club’s history.

With the Palace Ground’s pitch in resplendent condition, Ballynahinch kicked off. Within two minutes play Armagh were penalised for failing to release the ball following a tackle.

Three minutes later another rucking offence, this time inside their “22,” led to the Ballynahinch out-half landing opening the afternoon’s scoring at 0-3. Almost immediately after the re-start, it was Ballynahinch’s turn to be penalised. Cormac Fox’s attempt, unfortunately, went wide.

A spate of further penalties resulted in the visitors landing another successful kick to open out the score to 0-6. Poor discipline from both sides led to a further spate of penalties.

When a Ballynahinch forward did question a decision the referee awarded Armagh a further ten metres which brought the play to five metres from the Ballynahinch line. Armagh chose the scrummage option and they illustrated great technique which enabled Neill Faloon to collect the ball from the base of the scrum and force his way over for the opening try of the game.  Cormac Fox’s conversion brought the score to 7-6.

Immediately following the re-start Armagh were, again penalised, and the resultant touch-kick put the visitors five metres from the Armagh line.

Armagh was forced to ‘dig deep’ to defend but unfortunately, Josh McKinley was judged to have “killed the ball” and suffered ten minutes in the sin bin for his pains.

Despite being a man down Armagh regained possession in what could be seen as the turnover of the game. When the ball was passed back to Cormac Fox the touch clearance ended the first half.

With the score of 7-6 in favour of the home team at the re-start the advantage again shifted when, again, Armagh were penalised. Again the boot of Justin Rea shifted the score to 7-9.

Not to be outdone, however, a breakaway run from Neill Faloon led to him scoring under the posts. Another conversion from Cormac Fox opened the score to 14-9.

This was short-lived as Justin Rea kicked a further penalty. Armagh’s full-back, Timmy McNeice,  fielded a high ball inside his own “22” and gained a full 25 metres with a determined run down the centre of the field. This move led to a skilful cross-field kick from Cormac Fox which Robbie Faloon collected and scored in the left corner. Unfortunately, the conversion went just wide of the posts.

The Armagh forwards appeared to gain momentum and began to dominate both open and set pieces. Kyle Faloon made a strong break and fed the ball to Robbie Whitten who went on to score a fine try at the posts and the conversion opened out the score to 26-12.

Directly from the re-start Ballynahinch’s centre, Richard Rainey scored Ballynahinch’s only try of the game. again the boot of Justin Rea was on target to bring the score to 26-19.

Willie commented that to win this fixture with the bonus point and, indeed, to deprive Ballynahinch of a losing bonus point was indicative of the team’s hard work.