City of Armagh back in the frame after Midleton victory 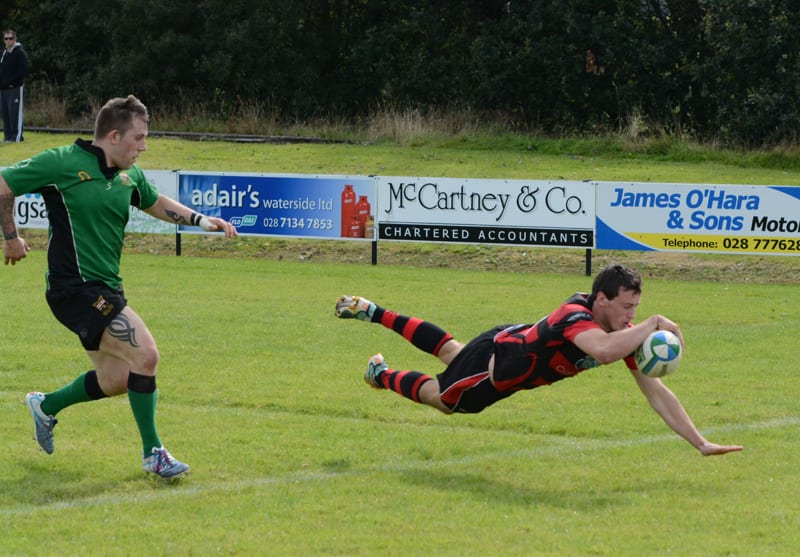 Armagh’s last game in the All Ireland League 2013 season was played in Midleton on a sunny afternoon. The very last kick of the game saw Armagh’s Richard Reaney kick a conversion to win the game by a solitary point. Close or what?

This season has seen Armagh start off their All-Ireland campaign in a flurry when they managed to hit glory by hitting joint top league position. Sadly, a home defeat by a very strong Highfield side and a somewhat lacklustre display against Wanderers rendered them floundering in seventh place.

The atmosphere about the Palace Grounds on Saturday morning was, therefore, understandably tense. No one was making much noise or talking loudly. To say the least, and to a man, the squad was totally focused on this game.

The playing conditions at the kick-off, considering it was December, were almost perfect with a slight breeze and intermittent drizzle. First points came to the home side when Lorcan McGillan landed a penalty shortly to be followed by another and yet another.

To see the home side 9-0 ahead was very encouraging but Midleton reacted positively by sending, centre, Alan Long over for a fine try which was converted by Paul Daly. Both sides were now seen to play what could only be described as really physical, tight, rugby.

The ‘nip & tuck’ rugby was only interrupted when Armagh’s centre, Seamus Mallon intercepted a loose Midleton pass inside his own 22. He ran the length of the field and fed the ball to Lorcan McGillan to touch down just left of the posts. Lorcan went on to convert his try to leave the half-time score at 16-7.

This score certainly raised the hopes of the home side but just after the re-start Midleton’s out-half, Paul Daly, landed a penalty to revive the Munster side’s hopes. These hopes were reinforced when their flanker, Dave Smyth, forced his way over the home line to narrow the score to 16-15. The conversion then put the visitors 16-17 ahead.

The game was now well and truly in the balance and the tension around the Palace Grounds pitch was unbelievable. Armagh continued to concentrate on constructive rugby and, sure enough, these tactics did bring results when Seamus Mallon managed to force his way over the Middleton line to score a more than relevant try.

This put the home side 21-17 ahead with twelve minutes left on the clock. Undeterred the Midleton side regrouped and launched a determined attack on Armagh’s line. This attack took the form of scrums, rucks & mauls inside the Armagh five metre red zone for the dying five minutes of the game.

The famed Armagh vocal support now kicked into gear and all present was made more than aware that Armagh’s season rested fairly and squarely in them keeping a rampant Midleton pack at bay. Scrum after scrum, ruck after ruck was repelled until, to the relief of all the Armagh team and supporters alike, the referee blew full time.

Tension the like has seldom been felt in the Palace Grounds but it was evident that the Armagh side were keen to reassert their winning stance and are more than capable of resisting the most concerted attack. It has to be said that the Midleton side put up a valiant display and the return fixture next year will certainly be one to prepare for with anticipation. This determined Armagh defence has to be praised because the whole team knuckled down and showed real team spirit.

The good news following this win has elevated Armagh from a floundering seventh position right up the table into third place. It is amazing how such a dogged display can transform a team’s season’s prospects.

Next Saturday sees the side travel north to play Ballymena in the Ulster League. Again, this will be a difficult fixture but no doubt, the Armagh resolute attitude will travel with the team.