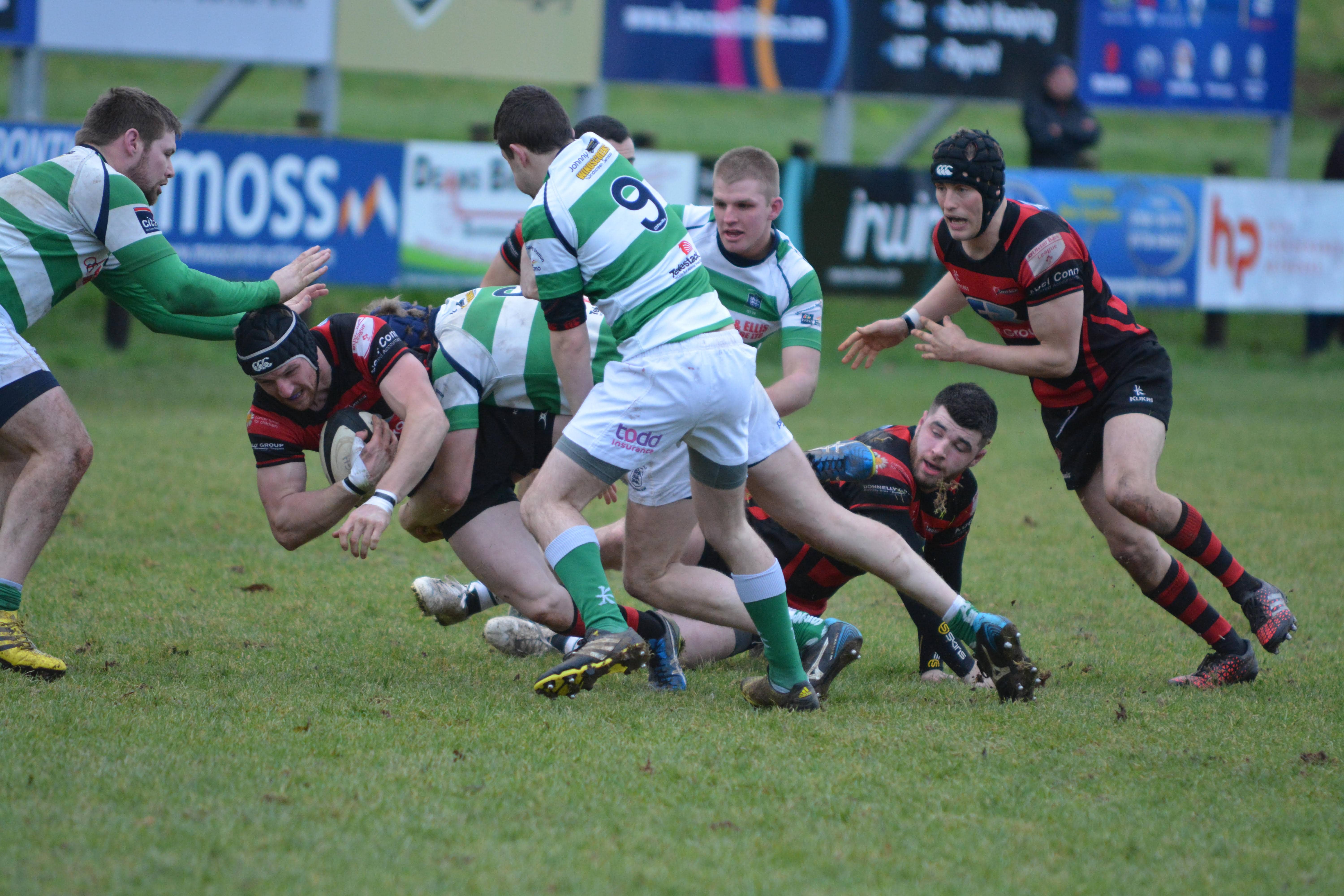 Armagh Thirds travelled to Stevenson Park on Saturday for a crunch league match with neighbours Dungannon.

The visiting team started strongly with some direct running from the forwards setting up a good attacking position. Armagh were awarded a scrum 5 metres from the Dungannon line and number 8 Daryl Morton burst from the base of the scrum, crashing over for the first try of the day. Matthew Clarke converted giving Armagh an early 7-0 lead.

The Armagh forwards were starting to dictate play and were proving a handful for their opponents. Dungannon possession was being turned over by the visiting pack with Jack Sleator leading by example. John Fletcher and Neil Lutton were making hard yards up the pitch and Daryl Morton took a crash ball from Trevor Girvan in the Dungannon 22 for an unconverted try, putting Armagh into a 12-0 lead.

Young Jake McCullough, making his first senior appearance for the team, came off the bench for Mark Allen and made a big impression, bumping off his opposite number and storming up the touchline. After Armagh’s early domination Dungannon began to gain confidence from some big hits and strong running from their forwards, especially their number 8 who charged through several Armagh defenders forcing his way over for a converted try to bring the score to 12-7 midway through the first half. The Armagh backline then began to make their mark on the game and a great low kick into the corner by David Spratt continued to keep the pressure on the home team. From this good field position, some slick handling from Jeffrey Dougan and Robert Straghan saw the ball transfer out to Matthew Clarke who showed great strength to dive over for an unconverted try. The half time whistle went and Armagh had a healthy 17-7 lead in a very competitive match.

Armagh started the second half as they finished the first, dominating territory and possession. The boys in red and black continued their assault towards the Dungannon line but were met with some fierce defending from the home team and eventually Dungannon managed to clear their line and relieve the pressure, but only temporarily.

Over exuberance from Dungannon to get the ball back quickly led to an infringement at the break down. Trevor Girvan tapped quickly and set off stretching his legs all of fifty metres on his way to grabbing the team’s fourth try and pushing Armagh into a commanding 24-7 lead.

The match continued in the physical manner it had all day with Jack Gilpin and Ross Finlay making countless, impressive tackles. Armagh made it into the opposition 22 yet again and from the base of another scrum Daryl Morton crossed the white wash. Matthew Clarke pushed the conversion narrowly wide from the touchline and the scoreline was now 29-7 to the visitors.

In the final moments of the game, with the home team tiring, Jonny Morton, in the unfamiliar position of inside centre, make a great break and dived over in the corner for Armagh's sixth and final try of the day.

The final whistle sounded and Armagh were clear winners at 34-7, taking the maximum 5 points home and moving above Dungannon into second place in the league table with nine wins from nine games and three games in hand on the league leaders. Man of the match was awarded to Daryl Morton for his impressive display throughout the game.

The Third Fifteen’s next outing is at home on Saturday against Academy with another home game on Saturday 18th February against Enniskillen in the quarter final of the Forster Cup.