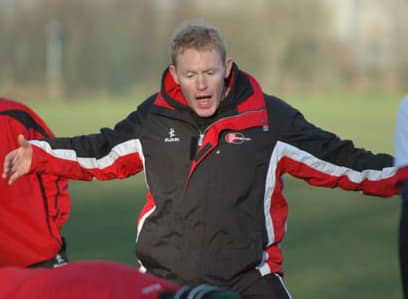 CITY of Armagh will be hoping to put last Saturday’s defeat at the hands of Malone behind them when they take on Banbridge in their fourth match of the Ulster Senior League.

The Armagh men will entertain the County Down outfit at the Palace Grounds this Saturday, September 22, with a 2.30pm start. Last Saturday saw City of Armagh beaten 13-24 by Malone.

It came after the city side had enjoyed a narrow midweek win over Ballynahinch – 16-15 – but which left them feeling weary for their second outing in just three days against one of the leading lights in Ulster rugby. Right away Malone launched an attack on the left wing. Armagh strayed off side and were penalised with James Morton also being shown a yellow card. The Malone captain, Glen Moore, touched down from the resultant line-out.The conversion went wide.

Malone were penalised for entering a ruck improperly and Armagh full back Johnny Steenson was accurate to inch the home side ahead with 3-5 on the board. Again Malone were caught for a penalty for failing to release the tackled player and again Johnny Steenson landed the kick to put the score to 6-5. This was short lived, however, when Malone full-back Taylor Achenson cut through the Armagh defence and scored a beautiful try. The conversion went wide to leave the score at 6-10 at half time.

Shortly after the break Malone scored again when Lee Barlow came off the bench to touch down to bring the score to 6-15 Out half Josh Pentland was inch perfect with the kick to put the score up to 6-17. The Armagh team never game up and, despite another try in the left corner, when the loose head prop touched down, the defence worked well in general. The conversion closed Malone’s scoring at 6-24. Richard Reaney then touched down under the Malone posts and went on to drop kick the conversion to put the final score at 13-24.

This Saturday also sees Armagh Seconds in action when they take on Donaghadee at the Palace Grounds in the Conference League, again with a 2.30pm start. The Thirds and Fourths have no fixture.