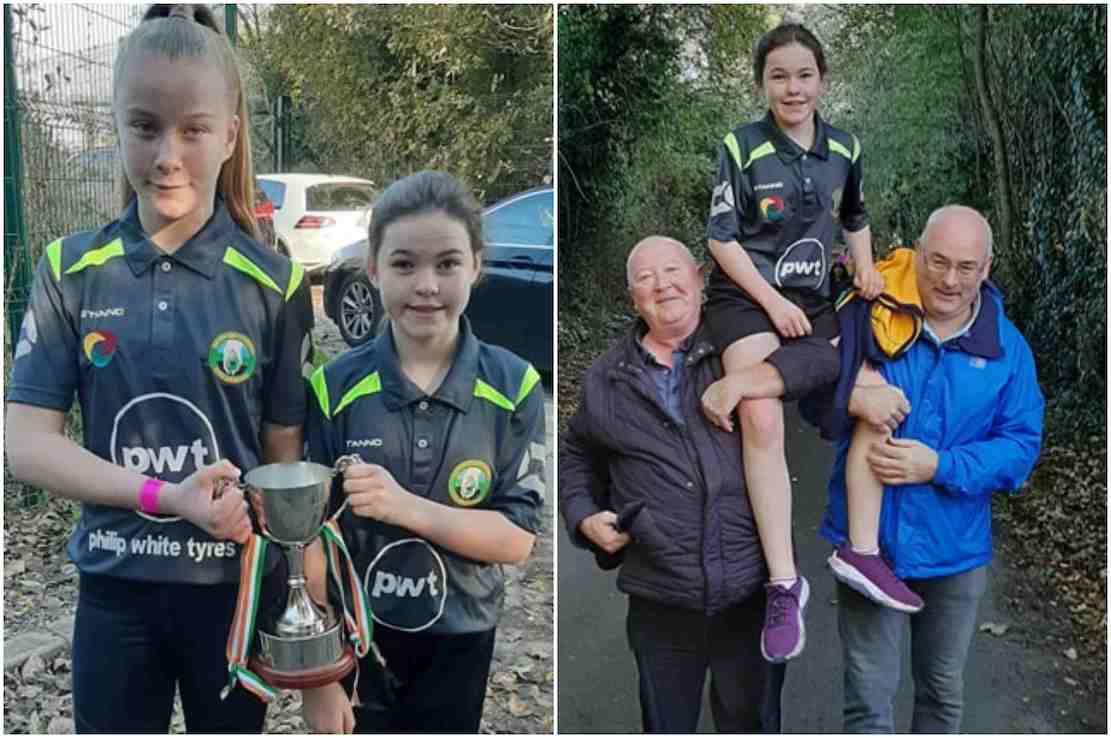 Last Sunday morning the Navan Road played Host to this year’s Girls Under 14 Ulster Final between Anna Carson of Bol Chumann Na Mierleach and Michaela Greene of the Madden Club.

With a large gathering the score was to start. Carson lead with the first throw by a mere five yards.

Greene let her second shot over the road leaving Carson with a great chance to have a comfortable lead but she also misplayed again only five yards separated the girls.

Greene then bowled a great third shot but was quickly followed by Carson.

Both girls opened the Navan corner in two more shots leaving only 10 yards in the tips with Carson still holding her lead.

Greene then played a great shot to almost reach Crosses Lane pressure on once again. Carson delivered the goods with an outstanding shot to beat the tip 40 yards.

Greene once again brought the deficit down to ten yards heading around the Bull’s Track with only two shots remaining. Carson who certainly was focused in every way played another great bowl to almost reach the finish line and held a lead of 20 yards over her opponent.

Greene played a great last shot But it was Carson who took the Honours to beat the tip 10 Yards and be the first ever Ulster Champion for Girls Under 14.

Anna Carson will surely be delighted as she is now the recipient of the John Mc Gleenan Memorial Cup.

Hard luck to Michaela Greene who, throughout the Championship’s proved a very strong competitor for years to come.

We would like to thank the West Armagh Consortium in their Sponsor of the New Cup that will be Annual for many years to come.

Philip White made a guest appearance on the day as all these kids have come through the Philip White youth program over the last few years and yet again has provided another champion. Well Done to the Navan club in hosting the Girls under 14 Championship.

Last Tuesday night the Clubs around Armagh Were in full Fight with over 60 kids Throwing on the Astro Turf in Sherry’s Field. this will Continue on a weekly Basis during the winter Months.

These scores cannot be postponed:

11.15am Philip Corrigan vs Malachy Lappin

No Cancellations scores must go ahead

Can throwers have there £10 entry fee paid before throwing.

Congratulations to Drumcairns Newest Ulster Champion Anna Carson who won the Girls under 14 Ulster championship, Anna is the Niece of Club stalwart Mick Mc gleenan and today on her 12th Birthday won her Grand fathers Cup the John McGleenan Memorial Cup. Well done Anna! And thanks to clubmen Roberto, Joey, Shea and Onion for there support.

Scores must go ahead.

Nothing between the two men benny got off to a better start but couple of big shots from ciaran put him out in front. At the start of the quarry ciaran hit a miler and put a shot in it and it stayed that way to the mushroom houses when benny broke the shot. Ciaran’s last shot just got over the line to win the score, great final.
And congratulations to our club member Niall o rourke on winning the moy rd novices final
Next weeks fixtures
Sunday 27/10/19
Ulster novices 3 final (12:30)
Ciaran savage vs Niall o rourke
Challenge score back in the road

27th october Hauliers Cup kindly Sponsored by Garvey Transport 11:15: Ryan Quigley vs Mark O’Rourke 11:45: Marty Hannaway vs Eddie Mallon 12:15: James Devlin vs David Devlin 12:45: Navan vs Roscarberry charity long shot! The shot will take place from the pole at paddy loughrans! £5 entrance fee, £40 for the winner! All welcome to help raise money for a good cause, spread the word

Message To All Clubs Meeting this Tuesday Night 22nd 8.30pm Venue Charlemont all clubs must attend . Can clubs post two weeks fixtures in advance next week as im not available the Navan club will be in cork for the weekend.