Packed grids, fantastic racing and a hint of controversy at Tullyroan Oval 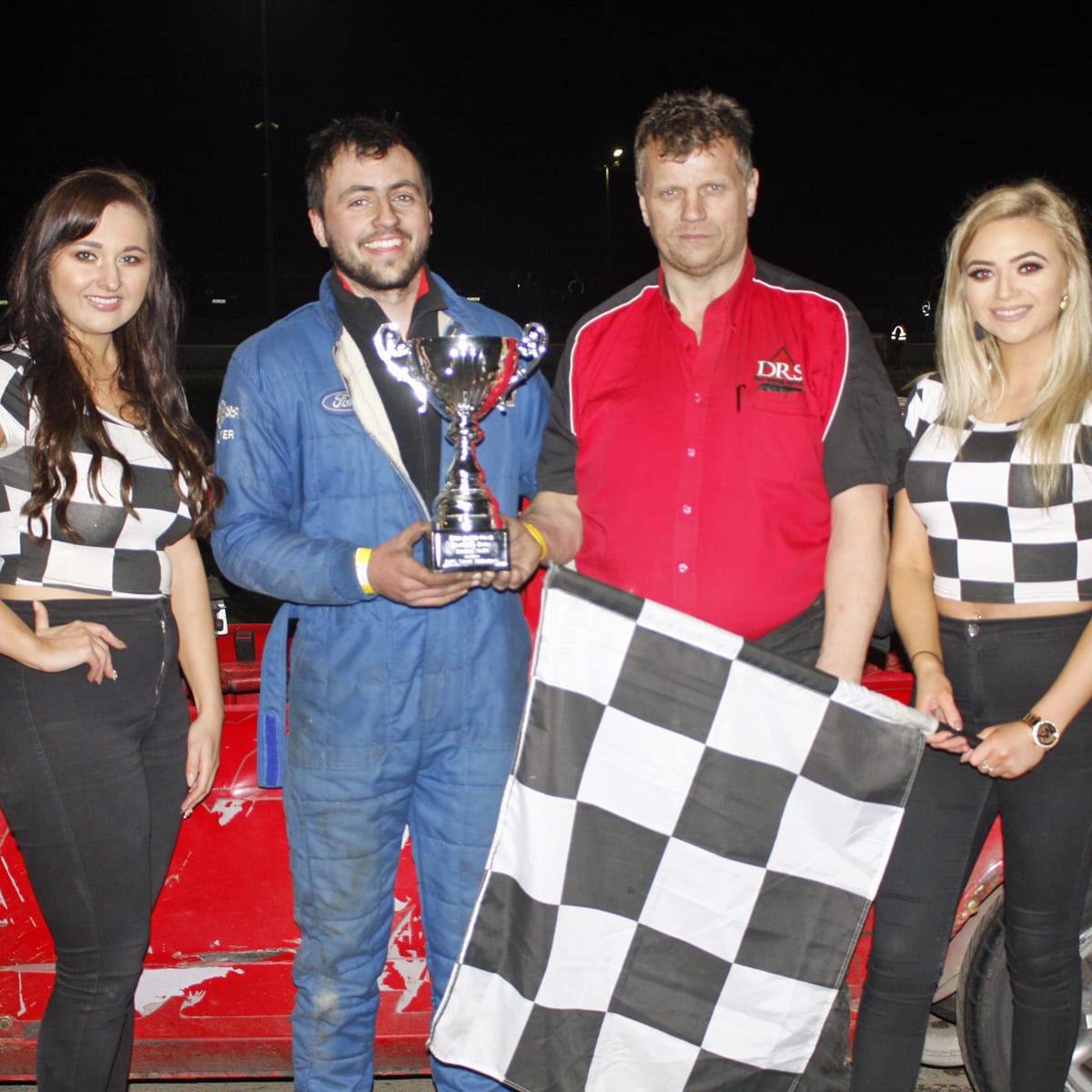 Jordan Rochford won the Lightning Rods final and is presented with the trophy by Thomas Dilly of meeting sponsors DRS Steel Buildings.

Packed grids, fantastic racing and a hint of controversy were all served up at Tullyroan Oval on Saturday evening, sending the race fans home happy after a tremendous evening of high speed action.

Glenavy’s Joe Largey was the winner in the ProStocks with Portadown ace Jordan Rochford taking an outstanding win in a fantastic Lightning Rods feature race.

The final formula on show at the DRS Steelbuildings sponsored meeting were the Rookie Bangers, and from a great showing of cars it was Cavan racer Eugene Cadden who stormed home to the victory.

World Champion Barry Stephen and fellow Scottish drivers David Frame and Chris Hay joined the local Superstox stars for the opening round if the NIOvalTV Series.

They produced some exceptional racing with Hay leading most of the way in heat one until Gary Grattan bumpered his way past with three to go. Grattan then hit trouble with a puncture, leaving Kyle Beattie to shift Hay with the bumper on the last lap to take the win. Hay and Stephen Stewart rounded out the places.

Heat two saw Birches star Lee Davsion dominate as he raced through from the Superstar grade to take the chequers ahead of Grattan and early leader Hay.

James Logan challenged him for the lead before Davison arrived on the scene, Lee sweeping past to a deserved feature race win ahead of Hay, with Frame nudging past Beattie on the final bend to take third.

The night finished with a Dash for Cash kindly sponsored by Gary Chambers Transport and Chris Sharp Photography, which saw Scotsman Hay lead from flag to flag to record the victory.

Despite a few casualties during practice it was still fantastic to see 23 Lightning Rods take the start for the opening heat, which saw Dylan McCann stretch clear on a very packed raceway indeed. Battling trio Jonny McMillan, Aaron Brunton and Tim Hazlett demoted Dylan as the race progressed, taking the chequered flag in that order as McMillan held on for the win.

Jonny looked set to repeat the feat in heat two, only for the challenging Hazlett to get under him heading to the final turn.

As McMillan slammed the door shut he was spun out, sending cars in all directions as they took evasive action. World Champion Aaron Stewart smacked the wall hard and lost a wheel, as Hazlett took the victory ahead of Ricky Shaw and European Champion Jordan Rochford.

The packed field set off for the DRS Steelbuildings sponsored feature race final, and it turned out to be a classic. McCann set the pace once again as James Litter and McMillan closed in, only for them to have their mirrors filled with the star graded trio of Rochford, Irish Champion Nigel Jackson and recently returned favourite Gordy McKee.

Rochford took the bit firmly between his teeth and hit the wide outside line to drag himself right around the placemen to take a simply stunning victory.

McKee, Mark McCambridge and Jackson filled out the places at the end of a great night for the formula which looks all set to be a huge attraction on the DMC Race Promotions circuits during the coming season.

The opening heat of the Classic Hot Rods provided one of the night’s big talking points, as the cars of Thomas Dilly and Joel Richardson locked together and speared off into the wall on turns one and two.

It was an unfortunate racing incident caused when the minimal contact between the cars broke Dilly’s steering, and hopefully the damaged Richardson car can be repaired sooner rather than later.

Anthony Morgan took the victory in that one as he held off Clive Richardson over the latter stages. Gary O’Neill slipped through to second behind Morgan at the flag when Clive hit trouble late on. Heat two saw Morgan again the winner, sweeping past early leader Adrian Boyle to lead home a repaired Dilly and O’Neill.

Unfortunately double heat winner Morgan was sidelined from the final with engine trouble, but Clive Richardson was back in action after rushing home to repair his Mk2 Escort.

Boyle led from Richardson only for Clive to get a puncture, which opened the way for Dilly to power through and take the victory in style over O’Neill and Trevor Cusack.

There was plenty of action all around the raceway as the Rookie Bangers had their first outing of the season. 21 cars started the opener, with Paul O’Connor and Christy Bradley contesting the lead. On the exit of the final bend they went either side of a stricken car, with O’Connor just getting the verdict on the line ahead of Josh McKinstry and Dave Mooney.

Talented teenager McKinstry then went one better in the second heat, taking the win over Stephen Murray and Killian Eager after another thrilling contest.

The final again saw the some excellent racing, with Eugene Cadden coming home to take the spoils ahead of James Goodman and Mooney at the end of another great outing from a formula that impresses more with each outing.

The opening round of the McElmeel Mobility Services Supreme Series was on offer for the ProStocks, with David Browne making a return to racing after many, many years out of the hotseat. Another newcomer Paddy Hannigan led much of the way in the first heat, only to lose out late on to Joe Largey and William McFaul after plenty of exciting pushing and shoving in the final laps.

Heat two saw a first victory for Sam Stewart as he led home McFaul and Largey to the line.

The closed grid final saw Largey and McFaul on the front row, and after some close opening exchanges Largey was able to edge clear to take the victory and the new race tyre courtesy of the sponsors. Dan Shannon, McFaul and Stephen Boyd completed the top places.