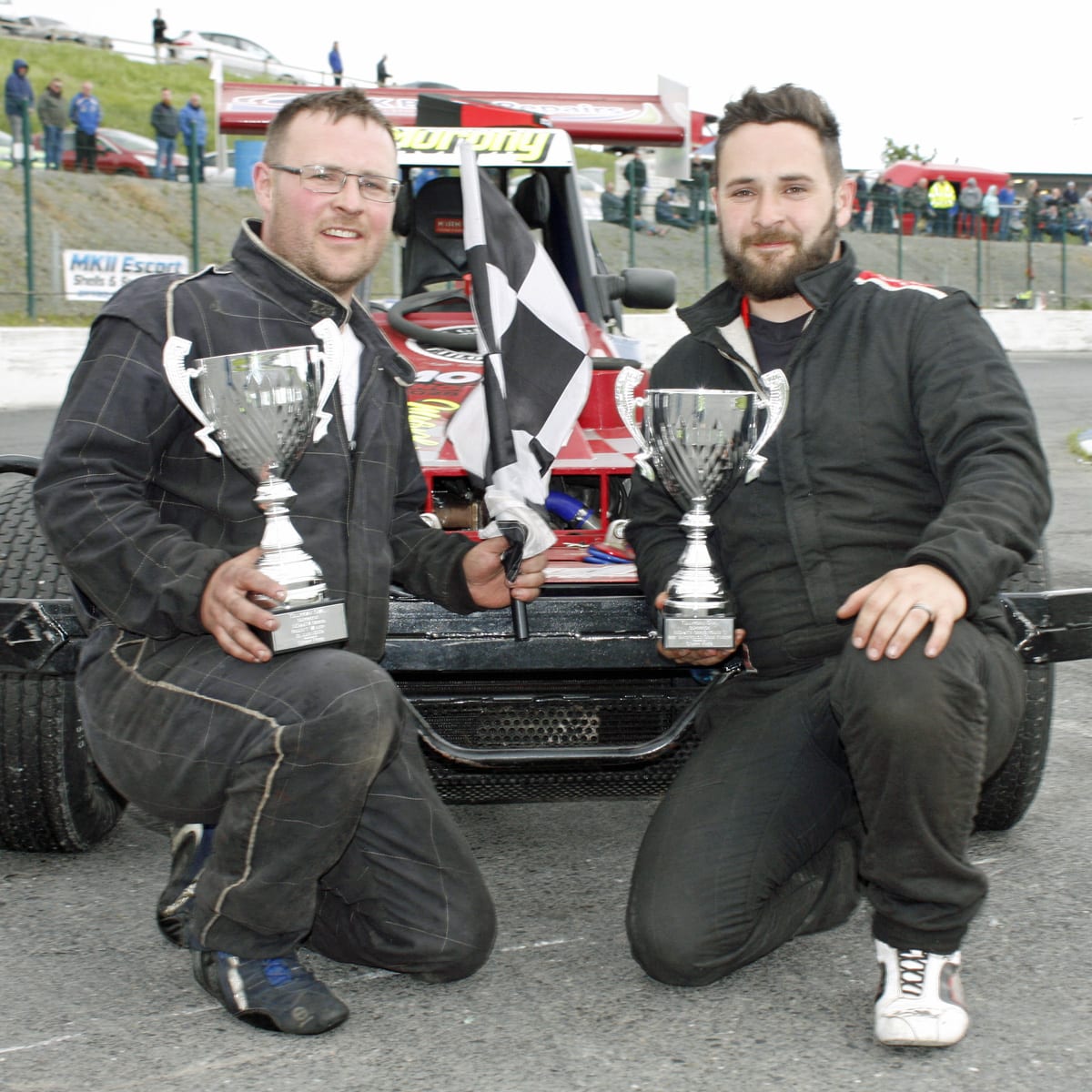 Conor Murphy (left) won the Superstox final by 0.003s from his brother Paddy (right) who received the trophy for first white or yellow grader home.

An exciting afternoon of top championship action was enjoyed by an excellent crowd at Tullyroan Oval on Sunday afternoon.

Surrey-based Joey Reynolds was the toast of the Unlimited National Bangers as he took a fine heat and final double to claim victory in the coveted Shamwreck 2019, whilst in the National Hot Rods the year-long Northern Ireland Championship title went right to the wire in the final race, with Portadown’s Adam Hylands scooping the honours.

The other victors at the Cherry pipes sponsored event were Conor Murphy in the Superstox, Mark Crawford in the Junior Productions and Jonny Patterson in the 1300 Stock Cars.

Seanie Bell led the field off in the opening National Bangers heat, before losing out to English visitor Joey Reynolds. There was an early stoppage after welcome Dutch visitor Dennis Vorkink found himself upside down on the back straight. Bell took some heavy hits on the restart, as Reynolds raced home to the win over former World Champion Steven Bolton and Irish Champion Leonard Dunn.

The top finishers in the heat started the Shamwreck 2019 final from the front of the grid, and Reynolds quickly made his escape out front. Bolton was giving it everything in his bid to get on terms, and his chance looked like it had come when a late red flag was called for a loose wheel on the raceway. Reynolds executed the perfect restart however, edging clear to take the Shamwreck title is style ahead of Bolton and Dunn.

The Allcomers race saw Bolton ahead until Reynolds took over out front once again, but he cruelly hit mechanical trouble and retired. Dunn came through to take the victory over Bolton after a bruising encounter throughout the field. The afternoon finished with the James ‘The Cat’ Smith Memorial Destruction Derby, with some huge hits going in around the circuit to whittle down the field. Stephen Boyd had a huge crash on the home straight, before it boiled down to just Stevo McGrath and Ryan Patton for the win. They played cat and mouse for some time, but it ended up in a tie when a head on between the two saw both unable to continue. At the end of a fantastic afternoon’s Banger racing, Vorkink took the Entertainer of the Day award back to Holland, Boyd claimed Best Wreck whilst the Best Presented Car was won by Adam Maxwell.

John Christie, Glenn Bell and Adam Hylands all had a chance of victory in the National Hot Rods Northern Ireland Championship as Simpson Race Exhausts World Series NI reached its final round. Adam Heatrick easily took the win in the opening heat ahead of Jaimie McCurdy, but whilst Christie beat Bell in their battle for eighth it was Hylands who came right into title contention with a great outside drive to third. Christie’s hopes then evaporated in heat two when he hit serious engine trouble, allowing Gary Woolsey to claim a fine win with title challengers Bell and Hylands next up.

Unfortunately series leader Christie was missing from what would have been pole position for the final, leaving Hylands and Bell to share the front row in what was basically a ‘winner takes all’ scenario. Hylands made the perfect start to hit the front, and despite Bell keeping him honest all the way home it was Adam who took the chequered flag to successfully defend his NI title. Behind Bell, Derek Martin, McCurdy and Woolsey completed the top finishers.

Welcome Scottish visitor Chris Cuthbert joined the local Superstox for the first round of the NIOvalTV Series, with class debuts for Steven Haugh and Michael Logan and lovely new cars on show for Geoffrey Moffett and Darren Bevan. Novice grader Paddy Murphy took a polished flag to flag win in heat one ahead of Jordan Robinson and Conor Murphy, after runner up on the road Aaron McNeilly was docked two places for jumping the start. McNeilly made amends in heat two, steering his RCE machine to the win this time over Paddy Murphy and World Champion Lee Davison.

Paddy Murphy again led the final away, leading until well after half way before the bumper of McNeilly moved him aside. Conor Murphy was charging forward too, leaving a grandstand finish on the cards. Conor went in hard on McNeilly into the final bend, spinning Aaron out but hampering his own progress too. That allowed his brother Paddy back alongside, the two having a drag race to the line! Conor just got the verdict by the narrowest of margins, with Paddy a gallant runner up ahead of Davison and Robinson.

The young stars in the Junior Productions were competing in the opening round of the Collision Accident Management Young Guns Series, with Mark Crawford the opening heat winner over Irish Champion Adam McFall and Sam Percy, after Sam McNeice was docked from second place. McNeice made amends in style by winning heat two ahead of Crawford and Percy, after a whole raft of penalties were handed down for jump starts and contact.

The final saw Crawford quickly assume control, leading all the way home to the flag to collect the trophy and a generous voucher from the series sponsors. McNeice kept him honest all the way, ahead of Meek and McFall.

An action packed opener for the 1300 Stock Cars saw Jamie McCann almost roll and Adrian McKinstry fenced hard. Jonny Patterson had pulled out quite a lead before a caution was called late on when Willie Stewart lost a wheel, and on the resumption Calvin Blake bumpered Patterson wide on the final turn to take a last gasp victory. Patterson and Nicky Lowry filled the places. Lurgan’s Patterson made no mistake in heat two, leading all the way to take the win over Blake and McCann. Patterson then repeated the dose in the feature race final, leading from flag to flag to collect the Cherry Pipes sponsored silverware and earn himself an upgrade for the next meeting. McCann, Blake, Lowry and Stewart filled out the top five.

Racing continues at Tullyroan Oval on Sunday, June 16, when a whole host of visiting drivers from across the British Isles will join the local stars for the Stock Rods Irish Masters. Also on the bill is the Junior Productions Irish Open Championship plus Lightning Rods, Back to Basics Bangers and Classic Hot Rods. Racing starts at 1pm.