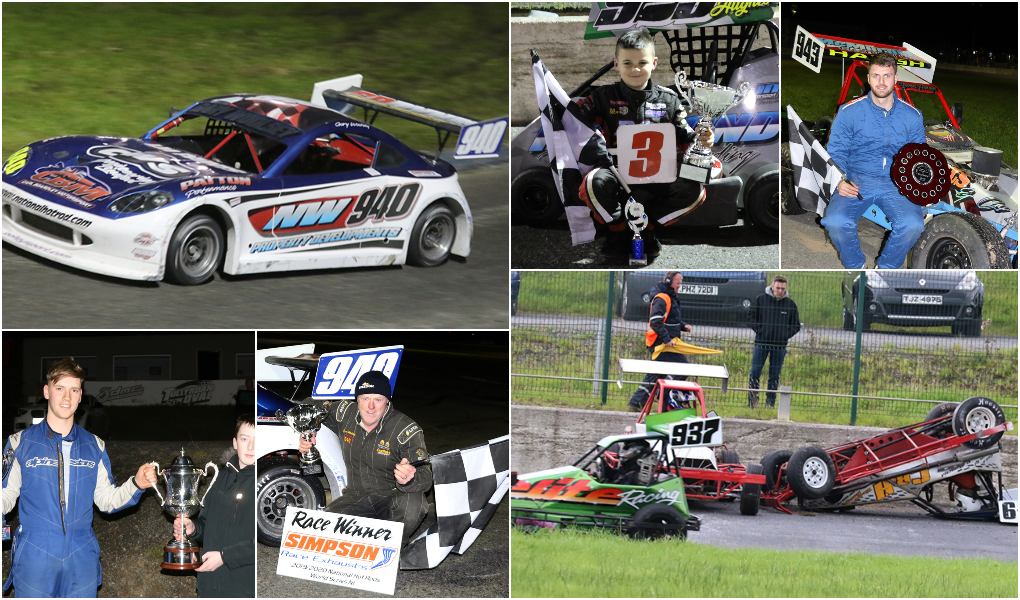 On a night of big grids and high drama at Tullyroan Oval, Portadown’s Gary Woolsey came on strong very late in the National Hot Rods feature race to take the honours in Round 3 of Simpson Race Exhausts World Series NI. Woolsey ran down long time leader Simon Kennedy, slipping ahead in the closing stages for a great victory.

The Lee Cherry Memorial Trophy was the major race for the 2.0 Hot Rods, and it was won by Cork’s Ian Riordan whilst The Moffett Shield for the Superstox fell to Steven Haugh, after he completed a faultless hat-trick across the evening. The other winners at the Cherry Pipes sponsored event were Meath’s Peter McConnell in the Rookie Bangers and Antrim’s Leyton Hughes, with Leyton being another hat-trick winner in the Ninja Karts.

Another full field of National Hot Rods were a sight to behold around the Tullyroan bowl, with Lurgan’s Simon Kennedy showing great pace to take the heat one victory over Podge McQuaid and Keith Martin, with the majority of the field coming over the line as one. Heat two saw more high speed action, with Podge McQuaid this time a deserved victor over the rapid duo of Ben McKee and Gary Woolsey. The final, Round 3 of Simpson Race Exhausts World Series NI, saw Kennedy set a lightning pace up front early on, pulling out quite a lead. Woolsey was quickly on the chase, slowly but surely reducing the deficit as the race progressed. With the lap boards out, a hesitation from Kennedy saw Woolsey swoop, taking up the running and securing the win. Derek Martin and Kennedy completed the podium, but only after McKee was docked from second for contact during the race.

Despite losing a couple of cars to mechanical woes during practice, there were still 19 cars on hand for the 2.0 Hot Rods Lee Cherry Memorial Trophy. Jordan Rochford led the early stages of heat one before hitting trouble, which gifted the lead and the win to Allen Cherry over Ian Riordan and Adam Best. The reversed grid second heat saw Denver Grattan take the victory, with the Banbridge man leading home Conor Hughes and Mervyn Emerson.  Mervyn Emerson led the final away from pole position, but Riordan quickly found a way underneath him early on to take up the running. The race was brought up short mid-race by a huge turn one crash, caused when Gary Grattan blew an engine at the end of the home straight and coated the track with oil.

Thankfully all those who hit the wall on the oil slick eventually emerged relatively unscathed, and on the resumption of racing Riordan kept his cool to power home to a well deserved win and with it the superb Lee Cherry Memorial Trophy. Emerson enjoyed his best run in some time to second, with Hughes and Rochford next home.

The annual Moffett Shield for Superstox attracted a fantastic 21 cars, which included former Junior Productions champion Graham Meek on his senior debut. Graham led the early laps of heat one before a caution period for a huge rollover for Ed Davis on the Tullyroan Bend. Ed emerged none the worse for wear from his acrobatics, with Steven Haugh taking over out front to take the win from Irish Champion Kyle Beattie and British Champion Lee Davison. Brian Lammey had a great run at the start of heat two, the novice grader leading the pack throughout the first half of the race. Haugh then moved ahead once again, claiming his second win of the night over Meek with Davis in third – quite a comeback for Ed after his huge heat one wreck!

The Moffett Shield Final saw Haugh promoted to the yellow grade after his two heat wins, with Meek again the early pacesetter. Haugh quickly sliced through once again though, edging clear to take the flag and the Moffett Shield in style. Meek impressed greatly with second on his debut, and the white/yellow grade award, with Jamie McCann also having a good run to third ahead of Scot Dean Johnston and Paddy Murphy.

There was action aplenty all around the track with over 30 Rookie Bangers on the circuit. The fantastic turnout produced some great racing, with Peter McConnell taking the opener ahead of Josh Goligher and Paul O’Connor. Heat two was all about Jake Macnicol, who steered his Ford Puma to victory lane over McConnell and O’Connor.  The Cherry Pipes sponsored final returned 27 cars after some great pit work by the teams, and it turned into an action packed affair. McConnell and Macnicol swapped the lead up front as many others got themselves into all sorts of bother. There was a big rollover on turn three, and after the restart McConnell emerged victorious for his second win of the night, this time over Deano McGrath and Goligher.

Another very healthy field of Ninja Karts completed the bill, with Irish Champion Leyton Hughes taking advantage of restarts in all three races to take a fine hat-trick of wins. On each occasion Leyton pounced when the caution periods closed the karts together late on, taking the opening heat in sensational fashion over Noah Teggart and Riley Dawson-Stirling after having spun and lost a lot of time in the early stages! Heat two saw Leyton lead home Ryan Berry and Teggart, before Teggart looked odds on to win the final having built up quite a lead. The caution period for a crash late on came at just the wrong time for Noah, allowing Hughes to get the jump to take the win after a last lap battle with Dawson-Stirling. Riley had to settle for second over Teggart and Ben Hawe.