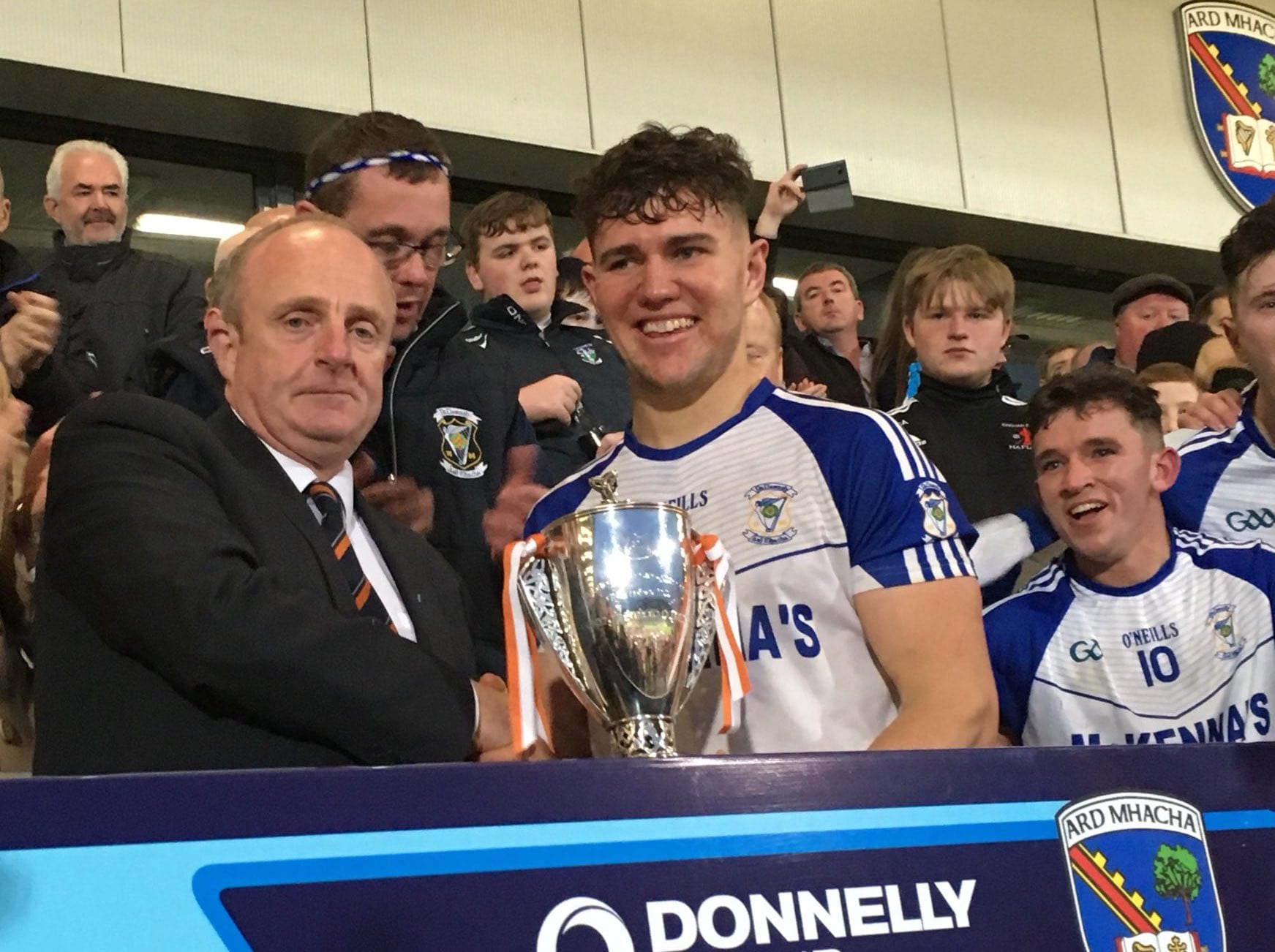 A second-half Ultan Lennon masterclass was enough to put the Loughshore men to the sword with a personal tally of 1-5.

It followed a rather insipid opening 30 minutes for the city side who managed just the two points going into the break.

However, two goals inside a minute at the beginning of the second half turned this tie on its head.

A goalkeeping exhibition from Patrick Morrison – his kicking in particular – contributed to his club’s first county title since 1991.

The Armagh stopper was responsible for keeping out at least 1-1 in the second half.

It was a high octane start to the game but Harps were largely wasteful in the final third and it took Stefan Forker to open the scoring for the champions after seven minutes to get this game into full swing.

Brian Fox added the second before Ryan McShane opened his tally after some great work, shrugging off two defenders before slotting over.

James Lavery, who was controlling much of the build-up play, then had all the time in the world, dropping the shoulder to size up a left-footed effort to put two in it.

Ultan Lennon could have had a goal just before the break but his scuffed effort was tipped over the top by the unsuspecting Johnny Montgomery In the Maghery goal.

Ronan Lappin added one just before the break to leave three points in it.

It looked like Maghery were going to push on when Conor Mackle smashed over within 30 seconds of the restart but it was to prove a false dawn as two goals in as many minutes turned this final around.

Ryan McShane added the first following a quick one-two, slotting past the keepers’ left hand, to the delight of a rather partisan crowd.

Lennon then won the high breaking ball in before bearing down on goal and smashing it high past Montgomery who had no chance.

Maghery, as reigning champions, fought back and responded like champions.

Three quick fire frees from Aidan Forker (2) and brother Stefan but the north Armagh men back in the driving seat.

But Joe McElroy levelled it again with a free on the right before Lennon put his side in front – a lead they would not surrender.

Two Lennon frees then put four between the sides as Charlie Vernon started to lord the midfield. James Lavery’s first half influence had waned, as had most of the Maghrey players around him.

Substitute Seamus Former pulled one back with a long range effort before another Lennon free killed any hope of back-to-back titles.

Maghery’s kicking became erratic and desperate as the clocked ticked over into the final minutes.

But they came close to pulling it to within one in the dying embers of this contest, only for a fine reflex save from Morrison who somehow clawed the ball back off the line after a long high ball in was flicked on in the side years box.

Aidan Forker added a late point before Conor Murphy confirmed the senior championship was coming back to the city for the first time since Pearse Ogs’ victory in 2009.

The Harps were beaten that day but finally ended their final hoodoo with a case of third time lucky with three finals in the last four years.

Man of the Match: Ultan Lennon.