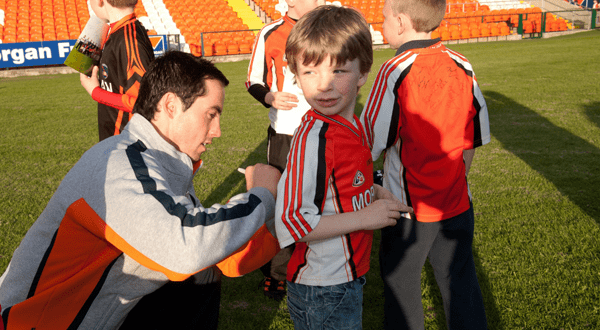 THE Armagh County Board will hold their hugely popular Open Night at the Athletic Grounds next Friday night, May 10, from 7pm.

Paul Duggan, County Chairman, said: “The Open Night allows our GAA followers and local media to mingle with our inter-county heroes for the forthcoming championship game against Cavan. The players and management will be available for signing autographs and fielding questions from a host of media reporters.”

He continued, “There really will be something for all the family, with tours of the Athletic Grounds, a quiz, penalty kick competitions, goodie bags, team photographs for autograph hunters, face painting, prize draws, as well as an opportunity to meet our county players and management.’’

To show your support for the team, the County Board are running a campaign by asking their GAA followers to change their Facebook and Twitter profile picture to a photograph with Armagh County Colours. Those who have the new Rainbow or Simply Fruit jerseys can enter a competition to win one of two £1,000 prizes for the best photograph with the new jerseys.

Armagh TV will live-stream part of the night, between 7.30pm and 8.30pm, but nothing beats being there!

One fan summed up the success of last year’s event with these words on the Orchard County Forum, ‘…….thanks to the Armagh County Board, Players and Management for the successful Open Night, a PR master-class, and what a lovely bunch of lads on the senior team.”

The theme for the championship and the Open Nights across the country is ‘Nothing Beats Being There’, and Armagh County Board encourage all their supporters to come out and support their team during the championship, with hopes high for a successful summer season.

Following last year’s event, Lisa Clancy, Head of Communications in Croke Park, was particularly pleased by the way that Armagh County Board adopted the promotion.

“I just wanted to say a particular ‘well done’ to all of you in Armagh on the way you have embraced, communicated and promoted the Open Night,” she said. “I am using Armagh as an example of best practice for next year.”

The Armagh County Board look forward to seeing everyone at this year’s Open Night next Friday from 7pm onwards.