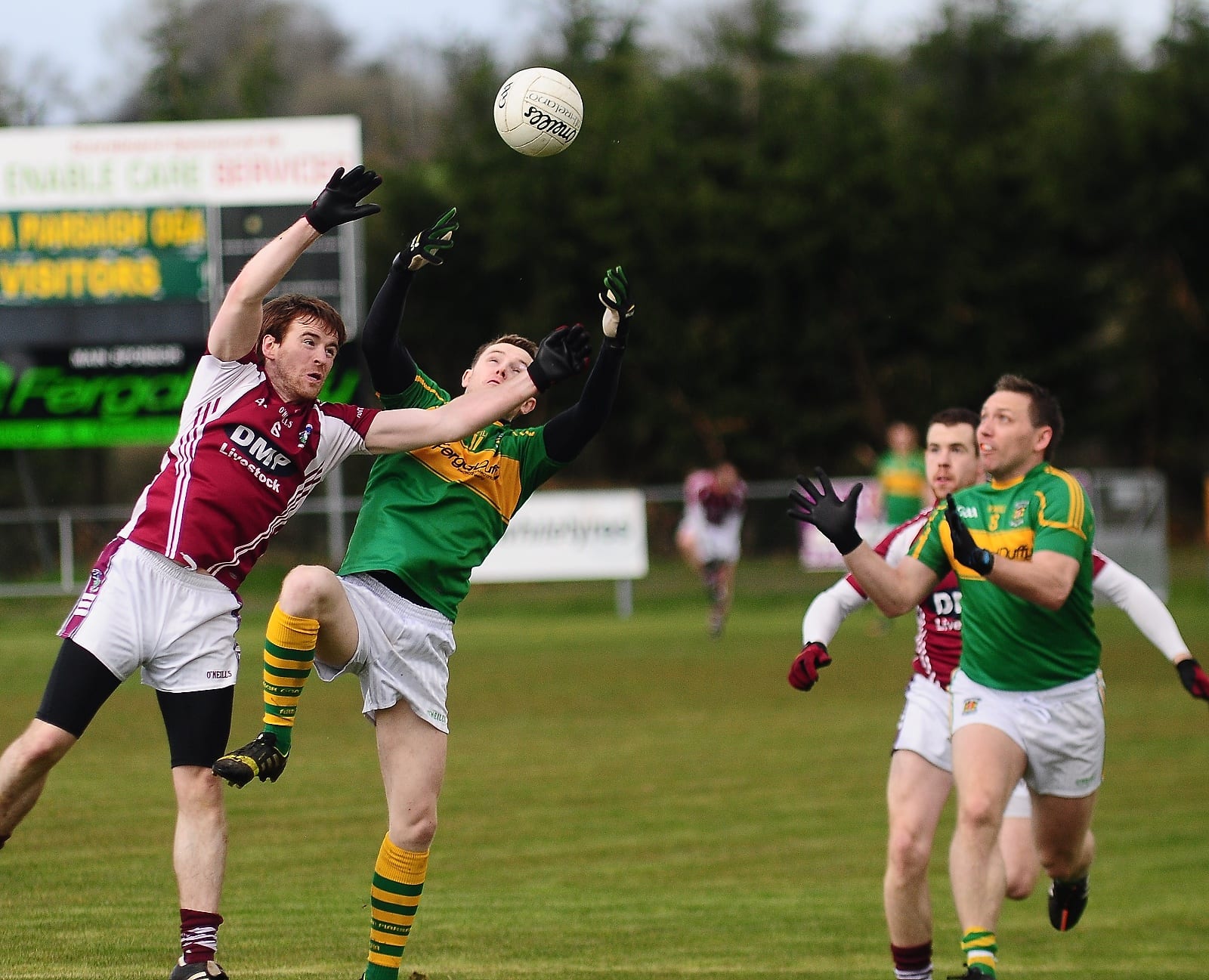 Armagh Harps opened their season at with a four point victory over Wolfe Tones, on a bright afternoon at Abbey Park.

Harps who were playing without county men – Decky McKenna and Paddy Morrisson – controlled for the majority of a typical rusty league opener.

Gareth Swift latched on to a cross field pass in the first half, turned his man and drilled the ball into the bottom left hand corner to help open up a gap early on.

Wolfe Tones struggled to get into the game, as Paul Kelly and Paul Campbell, proved to be a little bit too much to handle in the middle of the park.

Tones grabbed their goal in the closing minutes, but it was too little too late. Harps will be happy with a four point victory, and could have won by more had they been more accurate in front of goal, clocking up eight wides on the day.

Forkhill got off to a dream start in the Senior League with a deserved one point win at home to Sarsfields.

Club secretary, Thomas Smith, said earlier this week in an interview with The Irish News that his club weren’t willing to be the whipping boys of the top division this year, and they proved today that they are more than capable of holding their own at Senior level.

The home side dominated throughout, winning battles all over the field and went in at half time with a five point lead.

Sarsfields didn’t manage to get a single score in the second half up until the 53rd minute, but soon after that they made one last lunge to destroy Forkhill’s big bright day.

The referee added seven additional minutes, which rattled a few nerves in south Armagh, and Sarsfields managed to grab a goal in the fifth minute of added time. But the home side held and came away with a deserved two points.

St Patrick’s got their season off to a winning start, beating Portadown side Tir na nOg by eight points at home this afternoon.

In what could only be described as a fascinating encounter which remained there for taking, for both sides, up until the very end.

The home side made a strong start and Kieran Hoey lashed in an early goal to put them ahead 1-02 to 0-01 after six minutes. Gareth Mackin grabbed Cullyhanna’s second goal on the 23rd minute, to give them a six point lead.

It was shaping up to be a comfortable day for St Patrick’s but Tir na nOg had other ideas, notching 1-01 just before the end of the opening half.

The Portadown men came out strongly in the second half, and managed to extinguish Cullyhanna’s four point lead quite rapidly, and even took the lead on the 38th minute.

Fortunately for the home support, their men were willing to fight hard to regain that lead they had held on to for the entire first half. Aiden Nugent levelled the game with a score from play, this point was followed up by a score from Kieran Hoey.

Two Tony Donnelly frees helped Cullyhanna climb three points clear, but Tir na Nog kept on fighting and had a strong penalty appeal on the 56th minute which would have levelled matters again, but the referee was having none of it.

The game was put to bed late on when St Patrick’s scored 1-04 without reply. Both sides will be happy with the commitment shown by their players in this one.

Ronan Clarke was the saviour for Pearse Og as his point with the last kick of the game rescued a point at home to Ballymacnab.

The ‘Nab, perhaps the better of the two sides, were awarded a dubious penalty earlier in the second half, which Rory Grugan coolly dispatched.

Paudi Hughes had brought play back after Brian McCone was hauled down outside from what appeared to be just outside the 14’. The man with the whistle also dished out four yellows and as many black cards in a game that was largely a sporting affair.

The converted penalty put Ballymacnab five points to the good but the introduction of Anto Duffy for the Ogs changed the game as he started dominating the midfield. The Nab could only muster one further point in the closing stages and it was Clarke who converted late on for the hosts who had missed four easy frees prior to the equaliser.

Ballymacnab full-forward Brian McCone was the stand-out player, instrumental in everything his side did today.

Dromintee got their campaign off to a great start away to Granemore on Sunday afternoon.

The south Armagh side had to fight for the two points but saw the game out in the remaining 15 minutes.

The sides were level twice in the game with Dromintee going in to the break a point to the good – and probably good value for the lead.

Granemore’s Ryan Rafferty was dangerous throughout but it was their opponents that had the cutting edge, with the full-forward in inspired form.

However, Granemore, who were in danger of letting the game get away from them, scored a somewhat controversial goal after break. A deflected Declan Doyle shot hit off the crossbar and down before it was scrambled over the line – much to the objection of Philip McAvoy in the Dromintee goal.

An equalising point moments later was as good as it got for the hosts as Dromintee asserted a measure of control in the closing stages to win by four.

Exchanges were fairly even for the first fifteen minutes with each side registering two points. Taking  control around the middle of the park, Crossmaglen soon put the game beyond the opposition with two well taken goals.

The hosts finished off the half with a further three points to ‘Cruppen’s two. Half time score Rangers 2 – 5 Carrickcruppin 0 – 4. The second half was more even score wise with Cross’ registering five points to the visitors four and in the end running out comfortable winners.

***Elsewhere, there was also a win for Maghery against Killeavy while St Paul’s and Annaghmore shared the spoils in Lurgan.

Whitecross didn’t exactly give Keady a warm welcome into the Intermediate League, as they toppled their opponents by 16 points.

St Kilian’s, playing with the wind in the first half, settled themselves down when Darren Shields smashed in an early penalty.

Shortly after, Colm O’Hanlon added a second goal to the home team’s tally which meant Whitecross went in at the break with a healthy 2-08 to 0-02 lead.

Despite entering the second half with a slight wind advantage, last year’s Junior Champions seemed to be totally deflated, and never quite managed to rally any attempt of a comeback.

O’Hanlon grabbed a second goal for himself in the second half. And Whitecross completely killed the game with the introduction of five fresh faces to help them play out the dying minutes.

The one standout player worth mentioning in this spirited team performance from Whitecross was Tommy Kenny, who made two fine saves late on, showing he never let his attentions fade despite the healthy lead and came away from this one with a deserved clean sheet.

Clann Eireann were victorious away to Collegeland with Ryan Henderson the star of the show. An early goal for the hosts after 11 minutes didn’t dampen the Lurgan men’s challenge as they went into the break three points to the good.

The second half saw both sides trade points early on but the visitors couldn’t close the three point gap leaving Clann Eireann – one of the favourites for the league this year – picking up their first two points of the campaign.

An Port Mor also got their campaign off to a winning start with a narrow away win at Middletown. Despite bagging two first half goals, Middletown couldn’t build on their four-point halftime lead.

An Port Mor began to turn the screw ten minutes after the interval with a goal to bring the deficit to within a single point. Five unanswered points were enough to see off the challenge of the hosts who could only muster two second half points.

Despite Silverbridge making the brighter start against Mullaghbawn in their Intermediate League game, they went on to lose by two points.

With ten minutes on the clock, the ‘Bridge had already registered three points on the scoreboard, however, Mullaghbawn got to grips with the game and landed two points to narrow the deficit to a single score.

A further exchange of scores towards the end of the half sent Silverbridge in with a six points to three lead at the break.

However, Silverbridge only managed one score in the second half – that a free kick – to level the game with ten minutes to go.

Madden started life in the Intermediate with a good win against a promising Grange side. The Raparees were hungrier and won the battle around the middle – the hosts missing Armagh’s Ethan Rafferty – and it told.

Two goals weren’t enough for the Grange, especially when they could only muster six points. It’s a decent scalp for a Madden side that will be keen to make a swift return to the Senior League.

***Elsewhere Clan na Gael suffered a two point home defeat to Shane O’Neill’s in Lurgan. Eire Og squeezed out a fantastic away win to Culloville while St Peter’s hammered Dorsey to go top of the league.

Junior A and B League Round-up

Ballyheagan and Crossmaglen IIs played out an entertaining draw with the south Armagh men hitting three goals to peg back the host’s 15 point haul.

St Michael’s did just about enough to come away from Lisummon with all two points thanks to a 1-12 – 1-10 victory. Clonmore also beat Belleek by three points with their three goals the difference on the day.