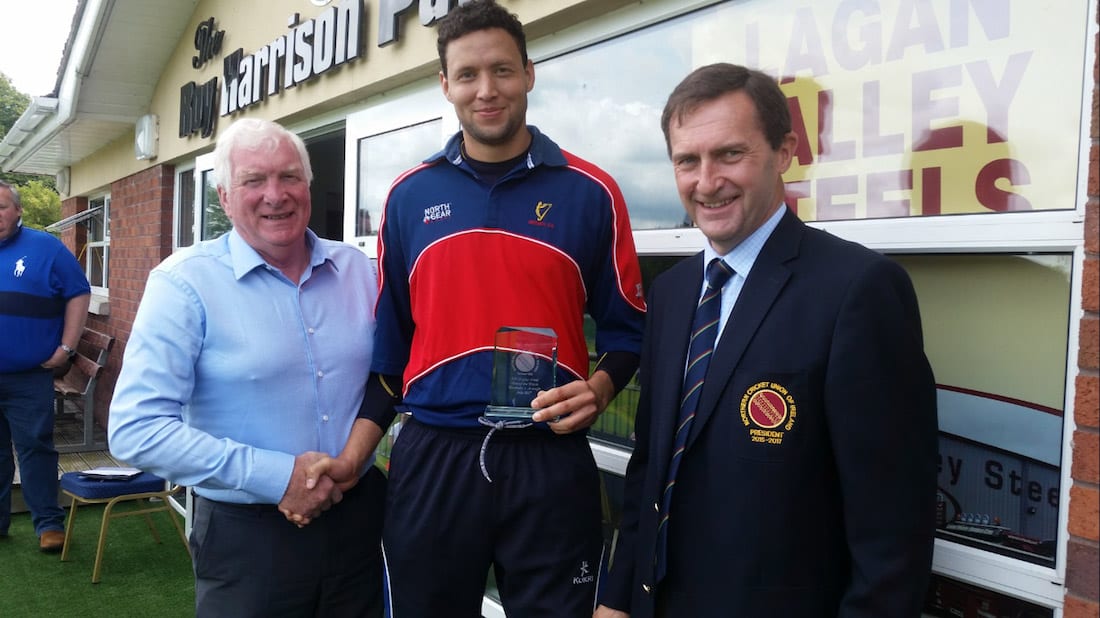 Armagh made the short journey early on Sunday morning to The Lawn Waringstown for the final of the Lagan Valley Steel T20 competition against Woodvale.

Armagh had progressed to the final with home wins against Lurgan, Cliftonville and Bangor but now faced what would likely be a sterner challenge against what most agreed were the best team in the division.

With the early morning start and Woodvale liking to chase, Armagh captain Matthew Steenson was delighted to win the toss and elect to field first.

What followed was some of the best white ball cricket an Armagh side has ever produced.

The innings couldn’t have got off to a better start as prolific opener Connolly was caught behind by McCarter in Jarred Barnes first over and Armagh didn’t take the foot off the pedal with brilliant fielding on show.

Barnes took a second wicket when he sharply caught and bowled Irwin while the off-spin of Neil Gelston claimed the other Irwin brother soon after thanks to a good catch by Andrew Hoey on the midwicket boundary.

Steenson was managing his bowlers smartly with Doyle bowling tightly and Alan Whitcroft taking the significant scalp of Paul Robinson who had done so much damage in the earlier league fixture.

The bulk of the Woodvale scoring was being done by their hard hitting bat Fahran Saeed but he was deceived by the spin on Michael Hoey and the catch was taken by wicketkeeper McCarter.

Armagh did not relent and superb closing overs by Barnes and Doyle reaped several more wickets as the Woodvale innings closed on 91-9, a fabulous effort from Armagh that was richly applauded by the growing crowd at the Lawn.

Jarred Barnes returned scarcely believable figures of 3 wickets for 5 runs in his 4 over spell.

Armagh hoped for a strong start in response to the low total that would hopefully take the sting out of the Woodvale attack and opened with Neil Gelston and Colin Russell as Jamie Rogers was feeling unwell.

The two Armagh batsmen looked in sublime touch with Gelston in particular finding boundaries around the ground. It took a particularly poor umpiring decision to give Woodvale their breakthrough as Gelston was hit high above the pad but was strangely given out by umpire Boyd despite a muted appeal.

This wicket brought two more as Steenson went without scoring and Russell edged behind soon after and suddenly Woodvale had belief.

This was dampened by the partnership of Jarred Barnes and Michael Hoey who took Armagh to the verge of victory with some sensible batting mixed with some great attacking shots.

Unfortunately both Hoey brothers Michael and Andrew fell before the winning post looking for a big hit to add to Armagh nerves but thankfully the resolute defence of Doyle was able to see it out and allow man of the match Barnes to hit the winning runs and give Armagh a five wicket victory and the Trophy.

After the game, Steenson said: “We delivered when it mattered, arguably as good a performance with the ball and in the field as most can remember from an Armagh team.

“Runs saved, catches taken and bowlers in control is a captains dream. We made hard work of the chase after the brilliant start Russell and Gelston gave us but at the end of the day the only thing that matters in a final is getting the hands on the cup and we did that.

“The team is very grateful to all the support we had over from Armagh on the morning and to match sponsor Ricky Dobbs. Fair play to Woodvale for a good game and to Waringstown for being excellent hosts.”

The reward for success in the T20 Trophy is a trip to the North West for the Ulster Shield. Opposition, date and venue are all to be confirmed.