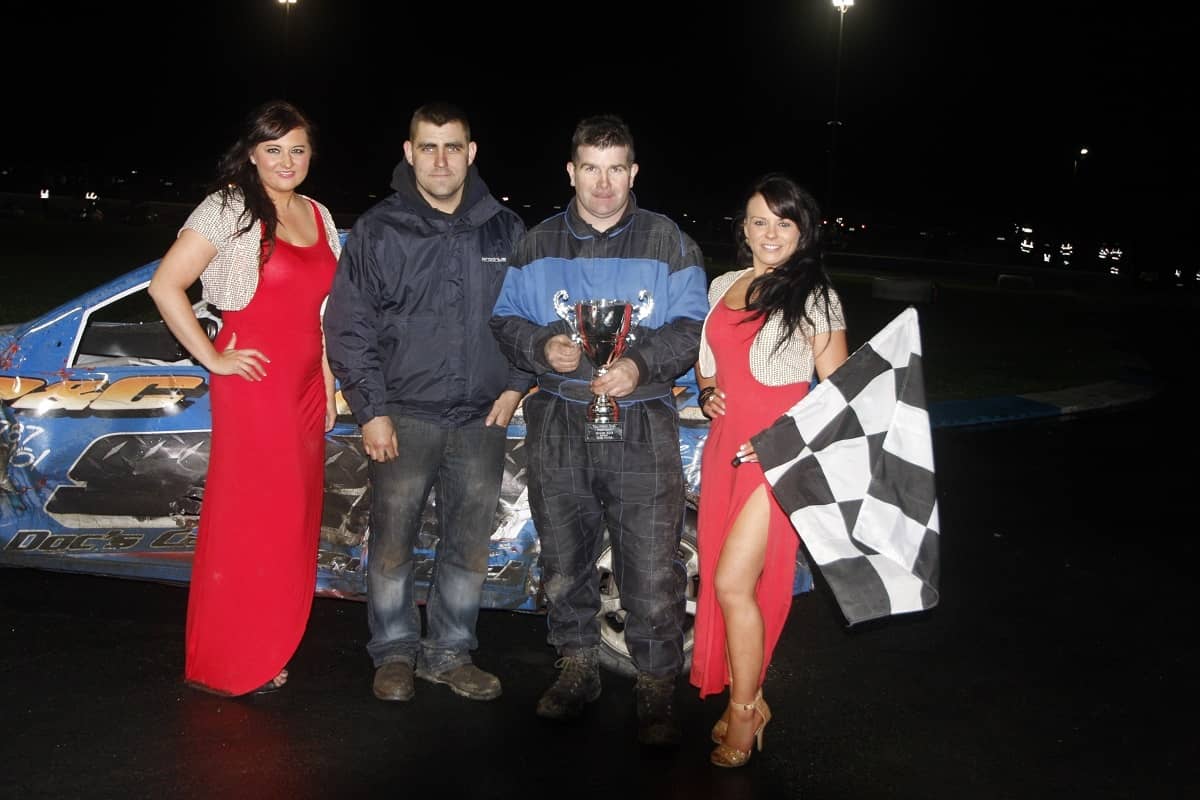 A huge crowd enjoyed the end of season Gala Night atTullyroan Oval on Saturday evening, with some red hot raceaction keeping the fans warm on a chilly evening.

Fireworks and other Hallowe’en frolics entertained the kids, whilst on track the main event of the night was the National Bangers Irish Championship, which went the way of Dublin ace Steven Reynolds.

An impressive field of National Bangers assembled for their Irish Championship title race, lined up in order of points scored during the season. Front row starters Steven Reynolds and Stevo McGrath quickly stamped their authority on proceedings, pulling ahead and avoiding the carnage around the raceway. It developed into a great tussle, and as they entered the closing stages McGrath went for the kill, trying to dispose of his rival. It all ended in tears as he spun off, but the delay allowed Steven Bolton to launch a last gasp bid for glory. He launched himself at the leader into the final bend, but Reynolds just managed to hang on to take the chequered flag and the title. Bolton had to make do with the runner up spot, ahead of Adrian McKinstry in third after one of the best Banger races seen at the track.

A lively Allcomers race followed which saw Bolton take victory, before a superb Destruction Derby saw Reynolds andAnto Finnegan share the spoils when both cars died simultaneously after a number of head on hits.

The 2.0 Hot Rods were dominated over the course of the evening by the Emerson brothers, with Stephen taking the opening heat victory over his brother Mervyn and World Champ Shane Murray. Mervyn then turned the tables to land his first ever win in the class in heat two in another family one two.

The final was an enthralling race from start to finish, which boiled down to a late scrap between Mervyn Emerson, Murray and National and Irish Champion Adam Hylands. Emerson held the lead, fighting off an outside line surge from Murray, before they all came together into turn three on the final lap. Emerson was nudged wide and out of the top spot, but Race Control deemed this to be an illegal manoeuvre and instigated the Girling rule, handing the win back to a delighted Emerson.Hylands took runner up slot, with Stephen Emerson inheriting third after Murray was docked two places for his part in the last lap incident.

The young 6-11 year olds in the Ninja Karts were battling for the ASC Cars of Ballymena Challenge Cup. NI Points Champion Adam McFall reeled off a great win in heat one over Irish Champ Niall Cregan, before Cregan went one better in the reversed grid heat two to take the flag over MatthewNicholl.

The young drivers coped superbly with the tricky track conditions all evening, and it was Nicholl who charged home to lift the Challenge Cup ahead of Cregan and Jack Hazlett.

Once again the ProStocks produced the biggest field of the evening, with Conor McElmeel coming through to land the opening heat win over Graeme Kinghan and Stephen Boyd.Kinghan went one better in the second heat to take the flag over impressive novices Lee Wylie and Jason Lee.

The final was all about the novices though, as Wylie set the early pace over Lee whilst the rest struggled to get on terms. Lee made his move in the second half of the race, nudging his rival wide to race home to the chequered flag and a final win on his first ever appearance in the class. Wylie was excellent value in second ahead of Boyd and another impressive white grader, Jamie Rea.

With the weekly meetings now finished for the year, the next outing at Tullyroan is not until Sunday November 24th. 2L Rear Wheel Drive National Bangers and the 2.0 Hot Rods will both race for their Tullyroan Challenge Cups, with support action from the Ninja Karts, Superstox and ProStocks.