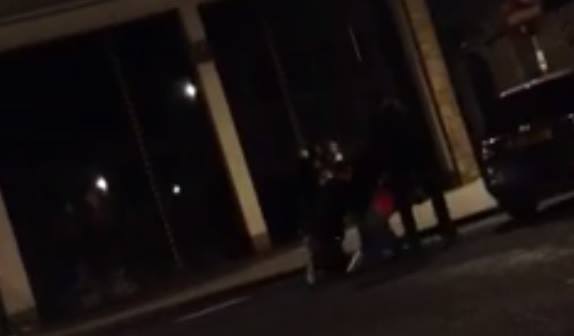 A complaint has been made to the Police Ombudsman after the arrest of a 19-year-old man in Armagh at the weekend.

The arrest – which happened outside the old fire station at Lower English Street – was captured on video and circulated widely via social media throughout the Sunday.

Armagh I received numerous emails and messages relating to the footage, which appeared to have been taken on a mobile phone.

We contacted the PSNI for a response to the claims the arrest had been heavy-handed.

A PSNI spokeswoman confirmed to Armagh I that officers in Armagh arrested the 19-year-old during the early hours of Sunday morning.

She said: “The man was arrested for possession of Class A drugs and, subsequently, for assault on police, resisting arrest and disorderly behaviour.

“He was later released on bail pending further enquiries.”

The spokeswoman confirmed that a complaint had now been made to the Police Ombudsman, who was investigating the matter.

“It would be inappropriate to comment any further,” she added.