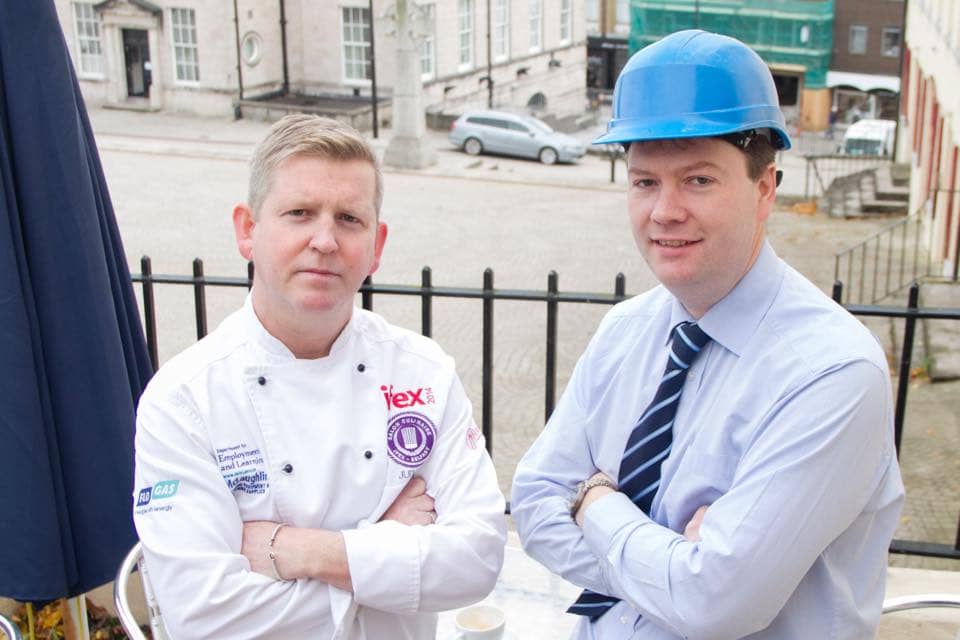 Armagh’s award-winning Uluru Bistro has revealed it is to remain open at its current location for another month – to accommodate a local man’s birthday dining tradition!

Work is at a very advanced stage on the restaurant’s new premises, with finishing touches currently being put to its new outlet within Emerson’s Supermarket, where it overlooks Market Street.

But Uluru owner Dean Coppard has been tweeting of the intention to remain open at the existing restaurant premises – in the shadow of St Patrick’s Church of Ireland Cathedral – after a request from a loyal customer!

The restaurant had been due to close on Christmas Eve and it was to be full steam ahead for the big move.

But in a conversation with Dean, a local man said he had been celebrating his birthday at Uluru with family and friends for the past five years and the closure would throw his plans up in the air!

Dean, never one to disappoint, has amended his original plans and, instead of closing on Christmas Eve, will throw open his doors again this coming Friday, January 2.

Using the hashtag #OneMoreMonth, the restaurateur revealed that, after giving serious consideration to what he thought was a bit of joking and teasing, it was decided to remain open at the current premises until Thursday, January 29, serving up the finest fayre which has won Dean and wife, Sara, countless awards.

The opening hours will remain the same throughout that time – Tuesdays to Saturday, from noon until 3pm for lunch, with dinner being served from 5pm until late each evening.

The special great value pre-show meals are available too for those attending some of the fantastic entertainment lined up this January at the Market Place Theatre will continue.

It was in October that Armagh I reported that 25 new jobs were to be created after Uluru announced it is to relocate into the Emerson’s store.

The announcement came just weeks before the opening of the new Post Office premises in the supermarket and the closure of the facility at the Eurospar shopping centre.

Uluru, which is currently located in Market Street, has won a string of awards including Restaurant Association of Ireland ‘best restaurant’ and ‘best wine experience’ for county Armagh.

It has also been mentioned in The Michelin Guide 2014/15 and is the only restaurant to be listed in The Good Food Guide 2015 for County Armagh.

The latest announcement in the works programme includes the creation of 25 new jobs including chefs and front of house staff and is the last piece of the jigsaw in the £2 million high street investment project.

Dean Coppard, crowned ‘International and Ethnic Chef of the Year’, opened the restaurant in 2005 with his wife Sara and has built its reputation as being one of the most unique eating houses in Northern Ireland.

Speaking about the relocation, Dean said: “Our customers mean the world to us. We love that they keep coming back to us for food cooked with our Australian twist, good wines, beers and our all round hospitality.

“Demand for more space and an increase in our customer base means we must cater for our customers’ needs.

“All our efforts, from sourcing local food from local suppliers, developing our cooking techniques, to enhancing our menu offerings and improving on our capacity to suit everyone, will enhance the experience for all.

“Our new concept has evolved from the original Uluru restaurant. With our love of food and our added capacity we will be able to provide a more varied offering for all diners from couples, small groups, families and larger groups, including our corporate customers, while keeping our award winning service and innovative style of cuisine.”

Meanwhile, Gavin Emerson, owner of Emersons Supermarket, speaking at the time, added: “This is an extremely exciting development for the high street and we are delighted to be a part of it.

“Emersons has a very special story to tell and this reinvestment in our high street is the next chapter. We are totally committed to serving the people in Armagh city and district as we have done so for 125 years.

“People will be able to access car parking facilities, a range of Post Office services, a varied menu in Uluru offering for breakfast, lunch and dinner as well as doing their weekly or daily shop, all under the one roof and right in the centre of the town.

“For generations, the Emersons family been encouraging the people of Armagh to support local businesses. We look forward to welcoming our existing and new customers through the doors.”

It was in October that Armagh I exclusively revealed that planning approval had been granted for the new bar/restaurant development, an application for which had been submitted in July.

It has been a busy and intense time for all involved and we would like to wish Dean and Sara Coppard and the Emerson family the very best of luck in the venture.

For booking at Uluru during the extended opening period, telephone 3751 8051 or send an email to Uluru_bistro@hotmail.co.uk