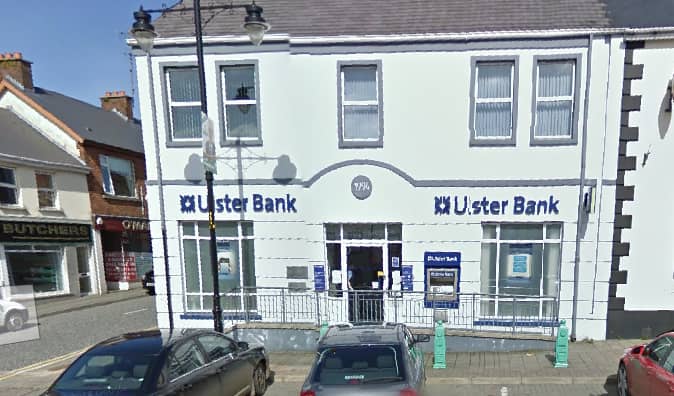 Ulster Bank is to close two branches across county Armagh in a move that has been branded “terrible”.

Branches in Newtonhamilton and Tandragee are to go in a cull that will see a total of 10 going across Northern Ireland.

Business currently dealt with in Tandragee is being transferred to the Portadown Branch, while customers who use the facility in Newtownhamilton will have to attend Newry.

The bank is also to close 14 branches in the Republic of Ireland in March of next year. These include Castleblayney and Clones in county Monaghan.

The councillor will be raising the issue at the next full meeting of the council.

“This is a disappointing blow not only to Newtownhamilton but also to a large section of the South Armagh area,  local businesses and the community,” said MrÓ Muirí.

“Many of those who have contacted me about the closure announcement are angry that Ulster Bank have shown very little loyalty or duty of care to them as  customers. The excuses the Bank have given for taking these actions are feeble.”

Meanwhile his Sinn Féin colleague Cathal Boylan, commenting on the announcement of closure by Ulster Bank in Tandragee, said: “This is terrible news. Ulster Bank is showing very little respect for rural communities in particular. I encourage all customers affected by this decision to close these branches to contact the bank to register their disapproval.”

Newry and Armagh DUP Assemblyman William Irwin MLA has expressed his disappointment at the announcement by Ulster Bank that the Newtownhamilton and Tandragee branches will close in February 2015.

Mr Irwin said the decision to close would have a monumental impact on the rural communities of Newtownhamilton and Tandragee, especially on businesses and elderly savers.

He also expressed concern at the fact Tandragee had already lost the Danske Bank in the town in recent times and would be left with no banking service.

Mr Irwin said: “I am totally disgusted by this announcement and I really do feel that Ulster Bank are treating their customers with absolute contempt, especially those in business in the areas affected and of course more elderly branch users who have difficulty travelling.

“Here are rural towns with vibrant communities and business sectors, whose residents will now have to do without a banking service in their towns and whilst Ulster Bank have not yet released the location to where the accounts will move to, it will inevitably lead to inconvenience.

“I will be speaking to officials in Ulster Bank today at our Party Conference and I will be expressing to them directly my complete disappointment at this announcement. It really isn’t good enough that a decision can be taken to remove this important resource from our rural towns and leave customers with a real dilemma in terms of travelling to another town to access their finances.

“It is especially a problem in circumstances where those customers do not have internet access or have the confidence to commence online banking.”

“There is absolutely no doubt that the rise in internet and smart phone banking is changing the actual physical infrastructure of banking as we know it.

“However to remove a front line service really is a setback for people in the area and I will continue to liaise with the bank in terms of highlighting the negative impact these closures will have.”

UUP councillor Danny Kennedy said: “The closures of both the Tandragee and Newtownhamilton branches of the Ulster Bank are another blow to rural communities in County Armagh.

“Local residential customers and businesses rely on the local bank. It is one of the hubs of the community. Local industry and the agricultural community make great use of local branches. On a practical level, not everything can be done online. I hope that the Ulster Bank will ensure that they do everything possible to facilitate the easy transition of staff to new branches.

“I’ll be making contact with Ulster Bank officials at the earliest opportunity to clarify what alternative arrangements they’ll be putting in place for their customers and whether they intend to leave ATMs in each town.”

The closures will not result in compulsory staff redundancies, however some agency jobs may be lost.