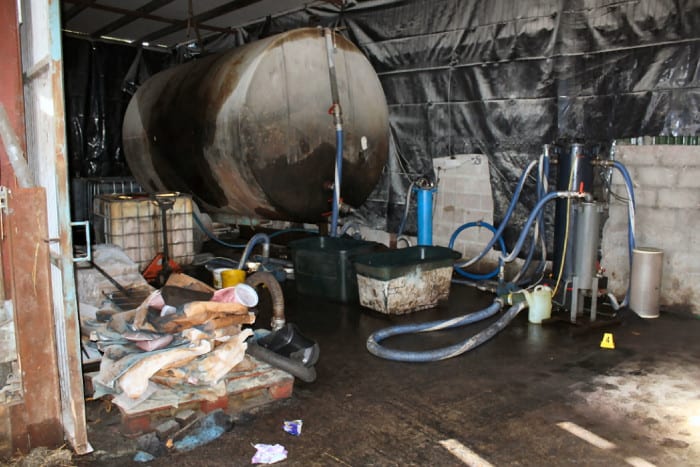 A Fine Gael TD has claimed that policing levels in south Armagh are allowing criminals to operate with “scant regard for the law”.

And Senator Tom Coghlan, at the June monthly meeting of Louth County Council, called for a full-time cross-border task force to help eliminate the gangs and their trades.

He said the criminal gangs dealing in the illegal fuel trade and tobacco smuggling were able to operate so well in the area as the police presence was such that they were able to go about basically unhindered.

The senator, who is originally from Crossmaglen, said he had been part of a delegation which had visited south Armagh recently.

He told the meeting that, during that outing, he had seen for himself no less than a dozen fronts where illegal fuel laundering had been taking place, as well as seeing pollution of the River Fane as a result of these criminal activities.

Senator Coghlan said he was not faulting the police, but that policing levels were such that they could not stop the gangs from operating to the extent which they were.

He called for a task force to help deal with the problems, which are prevalent on both sides of the border.

Just last month Armagh I revealed that a seminar was to take place in June between HM Revenue and Customs and organised by the Department of Justice.

The information was confirmed by Justice Minister David Ford in response to being pressed on the issue of fuel laundering in the Assembly by local DUP MLA William Irwin.

We also reported that 45 filling stations here were found to be selling illegal fuel during the past year, although the figure was not as high as earlier suggestions issued to the press via HM Customs and Revenue, according to Justice Minister David Ford.

The revelation came this week during the course of a debate on laundered fuel initiated by Mr Irwin, who had asked the Minister if he believed current legislation was strong enough to deter a filling station operator from acquiring and knowingly selling laundered fuel.

The Minister said fuel excise evasion and the related legislation was a reserved matter and is the responsibility of HM Revenue and Customs and the Treasury.

He told the Assembly: “Between February and May this year, HMRC consulted on a discussion document relating to penalties, which is the first stage in a wider review aimed at making it hard for a dishonest minority to cheat the system, including, of course, filling stations selling illicit fuel.

“In addition, they are continuing to look at legislative issues regarding naming and shaming filling stations where laundered diesel has been found: something that I have been pursuing with them.

“My Department and HMRC are organising a seminar on fuel laundering to be held in June. It will involve all relevant agencies and will be a forum to discuss whether there are areas in which more can be done.”