‘This was my way of paying PIPS back’ as Camlough Truck Run raises over £55,000 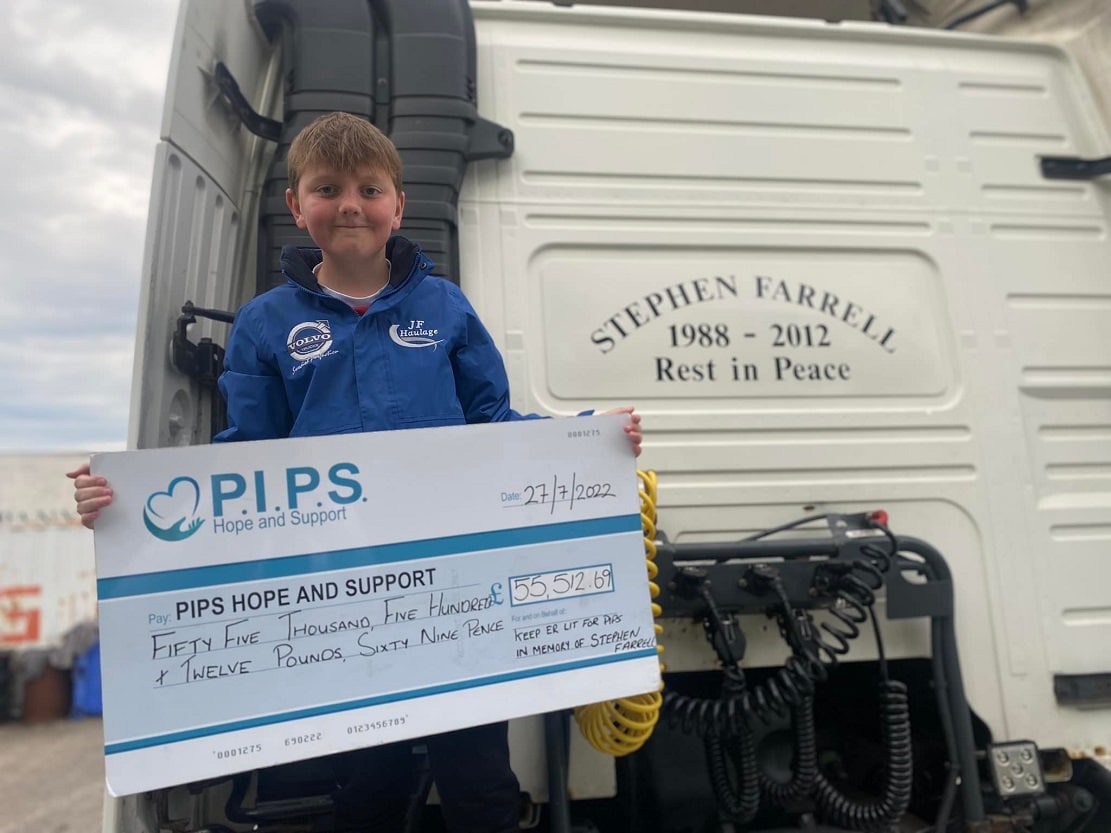 A massive cheque of £55,512.69 has been presented to Newry-based PIPS Hope and Support following the hugely successful “Keep Er Lit for PIPS” Truck Run.

The cheque was presented to PIPS Hope and Support on Wednesday (July 27) following the huge Truck Run which took place on June 4, and was in memory of local man Stephen Farrell, on the tenth anniversary of his passing.

The event, which saw Camlough village brought to a standstill by over three hundred lorries and street-lined crowds, followed a Tractor Run in Camlough on March 26  – which kicked off the “Keep Er Lit” show – and a Car Show held in Banbridge in April.

Seamus McCabe, who is CEO of PIPS, was also presented with a plaque for his “outstanding commitment and dedication to community and to all who have benefitted from the invaluable services PIPS provide.” Also in attendance at the presentation was Callum, Stephen’s son, who helped the committee in the organising of the event.

This was the third show that has been organised by the group, which brings the total amount raised for local charities to over £120,000.

The committee, posting on Facebook after the event, paid tribute to all who attended and made the day a success.

“Massive thanks to everyone who made an effort to bring a lorry. 304 lorries is still an amazing turn out”, they said. “To our 70 main sponsors, Thank you for backing us from the word ‘go’. Your support from the start was very much appreciated.”

PIPS Hope and Support (Public Initiative for the Prevention of Suicide and Self-harm) was formed in 2003 and is a leading charity for mental health support and awareness in the Newry area. Paudy Smith, the organiser of the ‘Keep Er Lit’ shows, says that this particular charity is close to his heart.

He told Armagh I that he was introduced to PIPS when his friend Stephen Farrell took his own life.

“The work they provide in PIPS is unbelievable”, he said. Some of the members of the ‘Keep Er Lit’ 2022 Committee

“I know the work they did for us, and I would hate to see anybody suffer without them. If one person reaches out to them for help, then it’s money well spent.

“This was my way of paying PIPS back, for all that they did for us around the time of Stephen’s death.”

Paudy says that one of the drives behind the event was “keeping Stephen’s name alive.” He explains that growing up, Stephen was very into his lorries and came from a lorry background, which motivated the group in organising a Truck Run.

Commenting on the success of the event, he said that the response to the Truck Run was “brilliant.”

“The whole community got behind it, and we’re very grateful for all the help and support. There’s only so much we can do without the backing of the general public and local businesses. They came to Camlough in their thousands.”

Ultimately, he says the aim of the event was to raise money and awareness for the very important work that PIPS do.

“I’d just like to thank Seamus McCabe for all that he does. The man goes unrecognised”, he added. “We presented him with the trophy just as a thank you for everything that he does.”