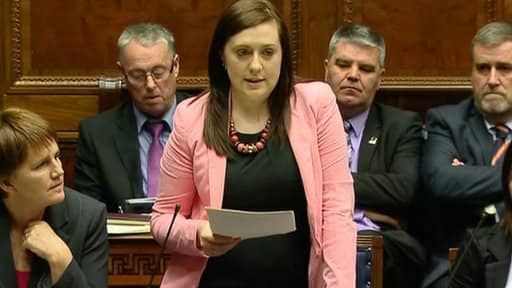 Newry and Armagh MLA Megan Fearon will take one of the new ministerial port folios in the Northern Ireland Assembly.

The announcement of the Sinn Fein team was made this afternoon by Deputy First Minister Martin McGuinness.

The DUP will take the majority of the departments and the Ministers will take office tomorrow (Wednesday).

But the issue of Justice Minister remains a sticking point and no confirmation at this stage that it can be filled. Independent Unionist MLA Claire Sugden has said she would “consider” the role.

The SDLP has followed the Ulster Unionists into forming an opposition.

Megan Fearon was appointed by Sinn Fein to replace Conor Murphy in 2012.

At 20 years of age, the south Armagh woman became the youngest member of the Assembly.

The former Queen’s University student – now aged 25 – was returned on the first count at the Assembly elections earlier this month, alongside Armagh MLA Cathal Boylan. They were later joined by Conor Murphy as the party once again returned three representatives for the new term.