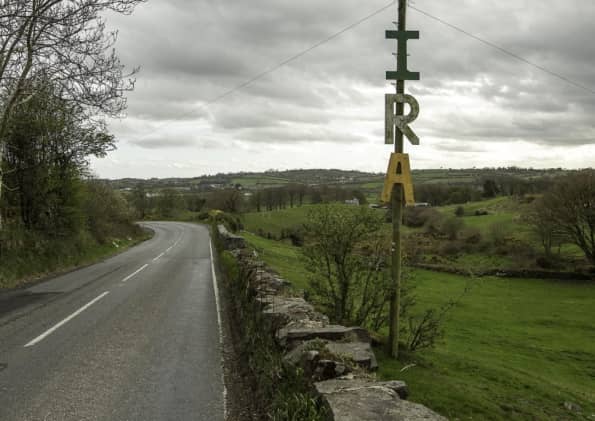 THE removal of IRA signs from south Armagh should be helped paid for by Sinn Fein and the SDLP, the Northern Ireland Conservatives have said.

Local Conservative Trevor Ringland was speaking after he threw down the same gauntlet recently to unionists and the Alliance Party, asking them to contribute to hiring a cherry picker to remove UVF flags in east Belfast.

“I think that Sinn Fein and the SDLP should do the same thing in south Armagh,” he told the News Letter. “Republican monuments along the border – and UVF monuments elsewhere – should be removed as quickly as the UVF flags in east Belfast.

He called for “leadership towards a shared future”.

The SDLP, Sinn Fein and the Alliance Party have been outspoken in their criticism of dozens of UVF flags erected in east Belfast recently along the route of a parade. The PSNI have faced questions on why groups of men, some allegedly masked, were able to direct traffic while they used a cherry picker to put them up.

Organisers insisted the flags related to the original UVF, established in 1913, and had nothing to do with the paramilitary organisation that adopted the name in the 1960s. But critics have branded the flags — some of which were erected by masked men —intimidating.

Large IRA signs around south Armagh have been carefully maintained at all times since the Good Friday Agreement, a local pastor has said.

Pastor Barrie Halliday from Bessbrook is also director of south Armagh victims group FAIR. He was making his comments in context of the ongoing row about UVF flags in east Belfast. He said: “Newry and south Armagh is full of republican flags and memorials, INLA and Palestinian flags and tricolours.

“Every main arterial route has got permanent memorials to terrorists. We have a pile of these memorials even on the wee roads. There are still many IRA signs up around south Armagh which are carefully maintained. There has been no time even since the Good Friday Agreement when they have been absent.

“It tells Protestants in south Armagh that there is absolutely no hope of neutrality, never mind proper peace. If the signs did come down it would at least give IRA victims a breathing space of a few years. How are we meant to move on until Sinn Fein sorts this out? These are all on public property.”