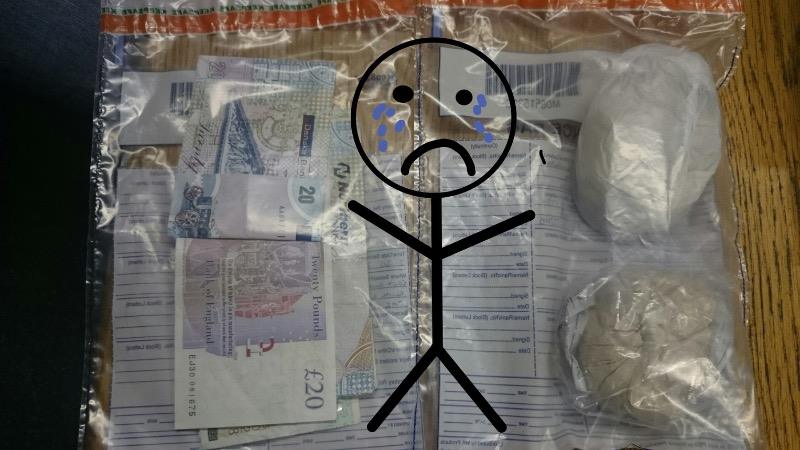 First we had Dissident Dan and now the latest stick-man employed by the police is ‘Drug Dealer Dave’ – whose face says it all after a successful drugs operation last night.

The PSNI in Armagh took to Facebook to introduce the unhappy chappie, reporting: “This is drug dealer Dave!

“Drug dealer Dave is raging right now because our Crime Team have seized thousands of £ worth of his gear and have him in custody.

“Drug dealer Dave ruins communities, and doesn’t care about the lives his dealing destroys, or the associated crime that goes with that.

Detectives from Reactive and Organised Crime Branch have made two arrests and seized a quantity of heroin after a car was stopped in the Church Street area of Poyntzpass last night.

“We have recovered a sizeable amount of heroin, estimated to have a street value in excess of £8000, and prevented potential harm to many people as a result of this operation. We are determined to reduce the availability of this killer drug and I appeal to anyone who has any concerns or information about illegal drugs to contact their local Police on the non-emergency number 101. Or, if someone would prefer to provide information without giving their details they can contact the independent charity Crimestoppers and speak to them anonymously on 0800 555 111.”

Police have hailed it as “another dent in the life destroying drug dealing activity in your community”.

“Together, we will beat Dave and his fellow dealers.”