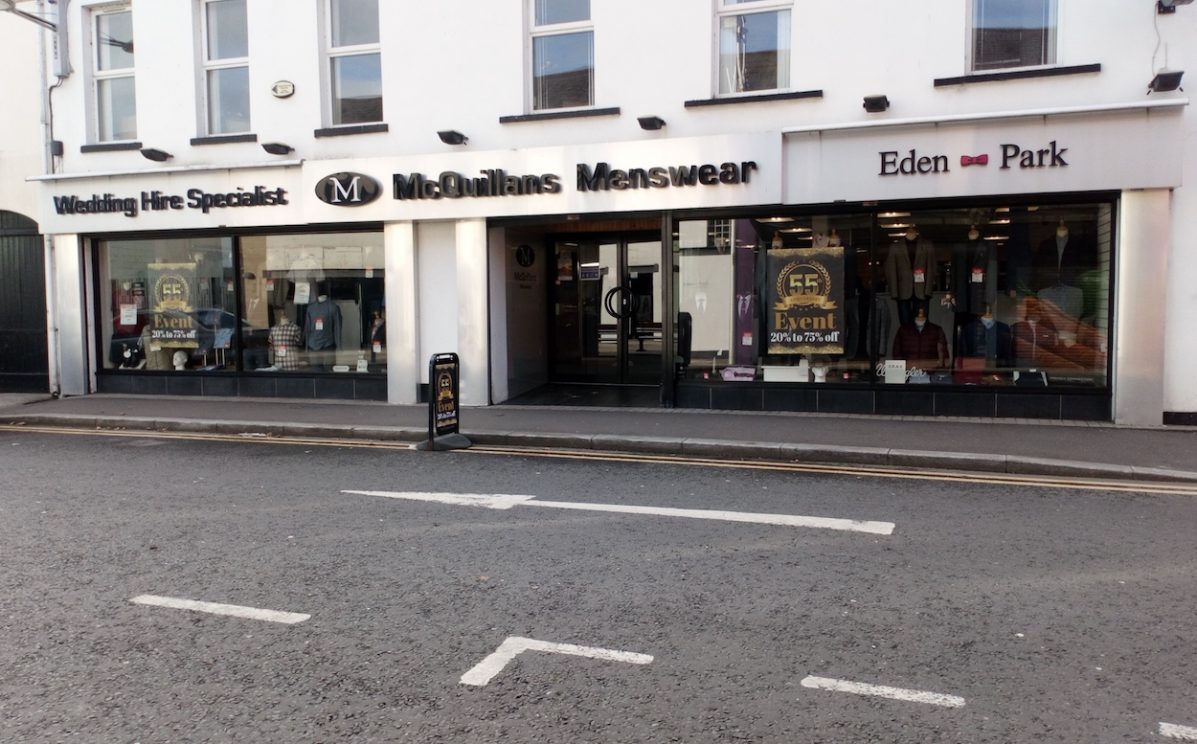 A popular dental practice looks set to open at the current McQuillan Menswear premises in Portadown, Armagh I can reveal.

Proposals have been drawn up for redevelopment of the prominent property on William Street.

An application has been laid before Armagh City, Banbridge and Craigavon Borough Council seeking permission for a change of use.

The proposals would see a dental practice operating at 50 William Street.

The applicant is Dr James McKee, who is practice principal of the neighbouring William Street Dental.

The plans would see the practice relocate to its new home, while it is also intended to continue to operate a smaller retail unit at ground floor level.

This will continue to trade as McQuillan’s Menswear.

Owner Martin McQuillan reassured loyal customers that the leading men’s clothing store would not be quitting Portadown and, indeed, said it would be business as usual throughout the upgrading works and renovations planned by the dental surgery’s move.

He said the shop – which was first opened by his father Brendan in West Street in 1963 – was looking forward to celebrating 60 years in business next year.

McQuillan’s Menswear has been at its current William Street address since 1974 and, according to Martin, the property offers an abundance of floorspace above their own needs.

To that end, these proposals would see the dental practice relocate to a more modern, purpose-built practice – if given the go-ahead by council to do so.

The ground floor would include a display area and waiting area to the front of the unit, as well as reception, disabled toilet provision, office and filing room and storage.

There would also be a treatment room at ground floor level, with three more on the first floor too.

First floor plans also include, among other things, a meeting room, waiting area, surgery, lab, X-ray and office accommodation, as well as toilets.

Staff facilities include separate toilets and a shower unit, as well as canteen and designated staff room.

Both ground and first floors would be linked and accessible by lifts.

The whole of the third floor, meanwhile, would be for storage purposes.

William Street Dental had plenty to smile about in 2022, having been highly commended in the Irish Dentistry Awards, in both ‘Practice of the Year’ and ‘Best Dental Team’ categories.

There will be even more to smile about if approval for this next step on their journey gets the thumbs-up too.