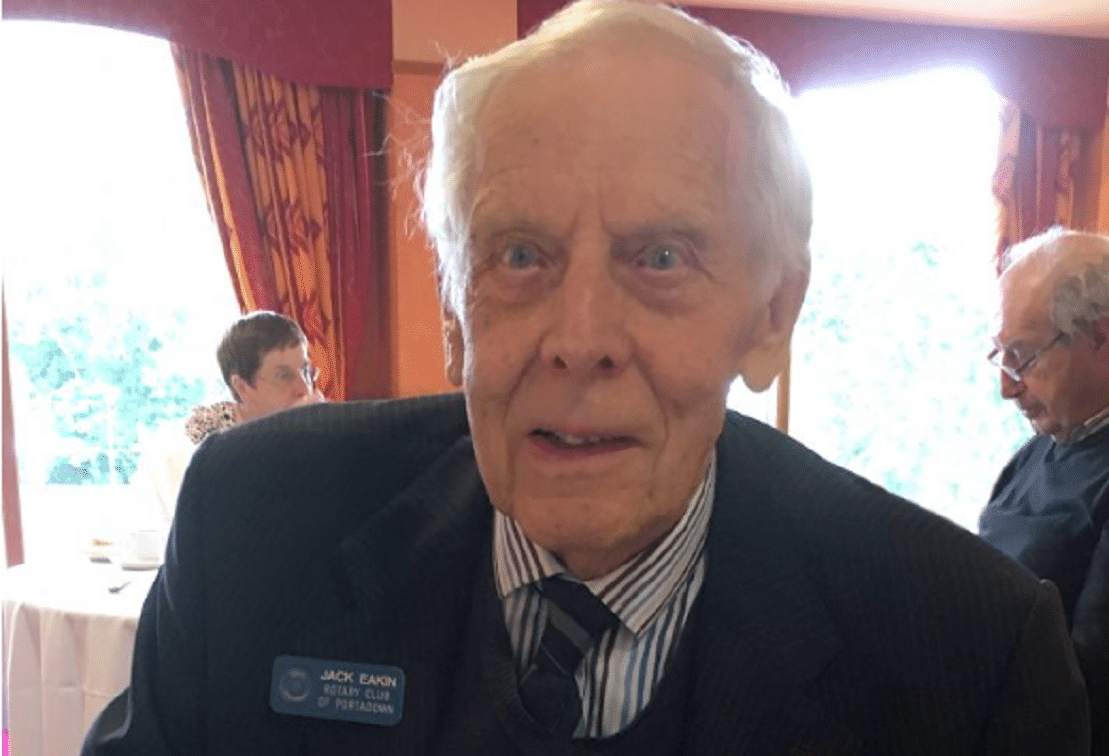 A Portadown man who ran a popular jeweller’s shop in town for more than 50 years and was the longest-serving Rotarian in Ireland, has died aged 97.

Thomas John (Jack) Eakin, described by those who knew as a “true gentleman”, passed away at Sandringham Nursing Home on Thursday following a full and happy life.

Born to parents John and Doris, he was the first baby delivered at the Carleton Home in Church Street.

He spent his childhood in Thomas Street and West Street, where he was soon joined by brothers Fred and Kenneth.

He attended the Academy Primary School and was friendly with Davy Cochrane, the famous Leeds United international footballer. Jack often spoke about how amazed he was to be able to play against Cochrane in rough summer football matches  on waste ground near Jervis Street.

Children were given much more freedom in those days band and Jack’s parents allowed him, at the age of just 10, to travel alone to Nottingham to watch the legendary Harold Larwood play cricket.

Jack attended Portadown Tech where he was a keen member of the Air Training Corps.  He remembers being ‘lifted’ by the police during a training exercise when he was sending Morse code messages by flashlight from the top of the tower at St Mark’s Church.   He was released without charge and joined the RAF in November 1942.

He trained as a navigator in Canada and then served at various air bases around England.

Even in his 90s, Jack could still read Morse code and, until he became ill, enjoyed making telephone calls to his great wartime friend, Jim Browning from England.

Last year, a wartime letter that Jack sent home from Canada to his mother but was never delivered, was discovered by his son Harry on eBay – 77 years after it was first written.  Jack greatly enjoyed reading it but could never understand how it came to be offered for sale by a dealer in America.

After the war, he took over his father’s jewellery business in High Street and, in 1946, married Betty Gosnell at Thomas Street Methodist Church.  They ran the business for nearly 50 years and did so on traditional lines – the shop was never modernised and the couple knew most of the customers by name. Jack in his jeweller’s shop in High Street

Jack had the contract for looking after St Mark’s Church clock and, in addition to winding it up, he had to call out in the middle of the night twice each year to adjust the hours for winter and summer time.

In the early 1950s, the family moved to Kingsway Drive , then to Carrickblacker Road and finally Long Lane, and made many good friends and neighbours  down the years.

Jack and his wife faithfully attended St Mark’s Church every Sunday for many years and he served on the select vestry for a time.

After retirement, the couple travelled widely and enjoyed spending time with their family.

After Betty died in 2011, Jack lived alone and enjoyed afternoons out in Scarva with friends.

Jack was proud to be the longest serving Rotarian in Ireland – he joined the Rotary Club of Portadown in 1946 and was still a member up until his death – and was awarded the Paul Harris award for his services to the club.

He was also a member of the Masonic Lodge in Thomas Street, a keen follower of Portadown Football Club and loved listening to Ulster rugby and England cricket matches on the radio.

During his funeral service, which was held at St Mark’s Parish Church on Sunday, the Rev William Orr told the congregation that “those who knew Jack will remember him as a man who never let things get him down”.

He described him as “a man who loved telling stories, never got angry and never had a bad word to say against anybody”.

“He was a kind, honest, true gentleman and highly regarded by everyone who knew him,” he said.

Gordon Speers, who knew Jack as a fellow businessman, Rotarian, member of St Mark’s Church and a friend, described him as one of his favourite people.

“He had a lovely, quiet, charming nature. He was a true gentleman who was just a pleasure to know,” he said.

Jack’s health only declined in the final year of his life and his family thanked the staff of Craigavon Area Hospital and Sandringham Care Home who cared for him.