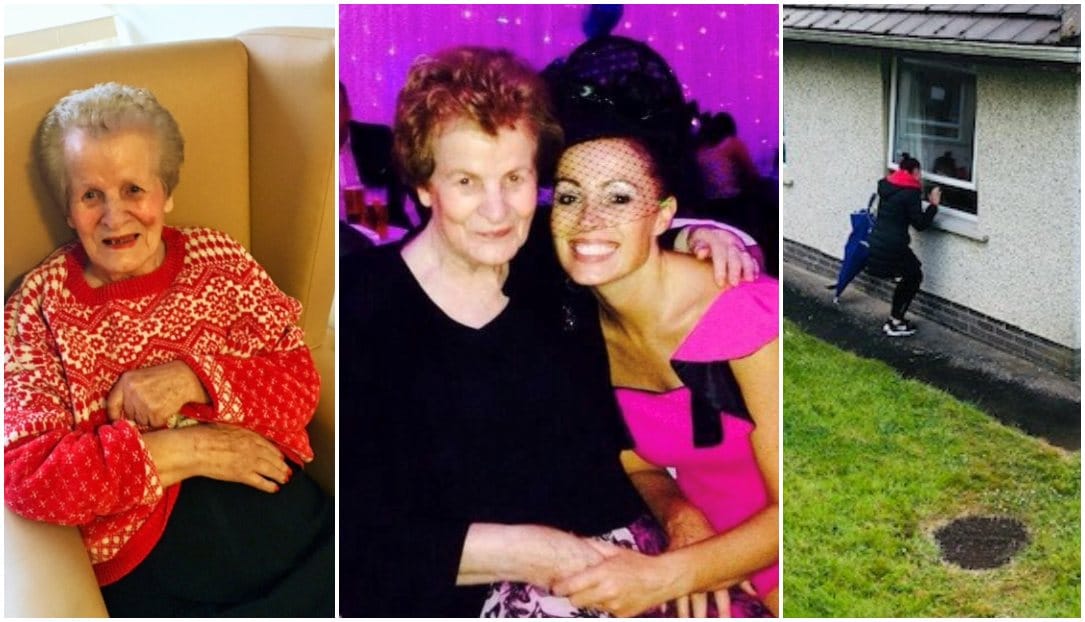 A desperate daughter battling for access to a care home where her 87-year-old mother resides says “enough is enough” after nine months on the other side of the window.

Since mid March – barring a two-week stay in hospital – Martina Ferguson has been unable to hug, or even hold the hand of her mum, who suffers from severe advanced dementia.

Ursula Derry was diagnosed with dementia 12 years ago and was nursed at home for five of those years before being admitted into care  in 2013. Ursula can no longer talk or walk and has lost all mobility so she relies heavily on tactile sensory, basically touch – from holding a hand to a hug – “all the very simple things in life,” Martina tells Armagh I.

Hope has since turned to despair and now the Portadown woman is helping spearhead a campaign for access through the care partner role – alongside many other anguished families across Northern Ireland.

“Our elderly are the only people in society still locked up,” said Martina who, before lockdown, spent every evening tucking her mum into bed.

“That is the reality of this. Families accepted it, and I had to, even though I didn’t want to the first couple of weeks into lockdown, but then when it starts becoming months – we’re nine months into it now – it needs to end, because if they’re not going to die of Covid, they’re going to die of a broken heart or loneliness.”

On September 23, Health Minister Robin Swann said all care facilities – including nursing homes – in Northern Ireland should move to facilitate one face-to-face visit per week by one person.

The province-wide guidance has been drawn up to protect patients, residents and staff from Covid-19 – while recognising the importance of human contact to health and well-being. That was almost 10 weeks ago and still nothing has materialised at many homes in Northern Ireland.

“We don’t even have a proper timeline,” said Martina. “We thought we had a timeline when we were told these care partner roles were to be implemented, so lots of families were full of hope.

“We were told they were given six weeks to implement but this is now nine and a half weeks since that Government guidance. There have been a few care homes who have implemented the care partner role but at the majority of homes there has been a broad refusal.”

She added: “My mummy is in her last chapter of her life; tomorrow is not promised to anybody. In my mother’s care home there has been six Covid deaths and they are on their third outbreak and no families have got in. That’s the reality of it. A third of the care homes in Northern Ireland have got outbreaks in them.

“For us, every day is a waiting game. My mummy is in my mind all the time. When I wake up in the morning and when I go to bed, throughout the day, ‘is she alright’. I can’t just pop in – there are just some things you can’t see through a window.”

Martina says the current system in place at her mum’s care home is just not feasible – for her mum at least.

“When the care home is not on an outbreak, visiting is 30 minutes in a front porch area with two metre social distance and you wear PPE,” she explained. “My mummy needs someone up close and personal because of her advanced dementia. The visiting policy just does not suit my mummy’s needs. They have to take an individual approach but for many care homes across Northern Ireland it has been a case of one size fits all.”

“Every day is heartbreaking,” she admitted. “Families are going through emotional turmoil, as well as residents in care homes; this isn’t just affecting myself, it’s affecting people across the whole country. We started our campaign last weekend to try and raise awareness of care partners but it’s also to end the loneliness, isolation and separation of loved ones and their families.”

The families held a protest at Stormont last Saturday and since then, the plight of so many families has been highlighted to the wider public.

Martina said the families understand the risks associated with Covid “but we are now nine months into this and enough is enough”.

“They have been let down by the system. If we can offer any sort of solace or support, to even just one family, well then, I think our campaign is working.”

Martina says the stories she has heard are “totally shocking and horrendous”.

She recalls: “I’ve heard of a care home closing blinds on the residents in broad daylight. It’s just inhumane; there’s something seriously wrong. I do feel our elderly and vulnerable have been forgotten.”

She added: “A friend in Armagh had an uncle in a care home and she had been asking about the care partner role; he’d been in the home a while and he went to bed the other night, she got a phone call the other morning to say her uncle passed away during the night.

“The care home asked if she wanted to come in. Do you want to come in and the man is dead. How must that girl be feeling?

“Of course we understand the risks, but the whole care partner concept is a risk assessed approach. We need to strike a balance and manage those risks. It’s the same as in hospitals where I was able to be with my mum back in July.” Martina and her mum in hospital back in July

She added: “My mum was in hospital for two weeks in July and that was the first time I was by her side in 15 weeks. I was disgusted about the state of my her personal hygiene and personal care but I was able to go and be by my mum’s side wearing appropriate PPE. My mum got tested as well.

“Hospitals are considered highly infectious environments, more so than care homes. We could manage it then in the hospital but why not now? We need the government to enforce this care partner role!”

Martina and the other families are continuing their campaign and have today (Friday) released a music video entitled ‘You stood by my side’, written by Co Armagh singer/songwriter Clare Hanna.