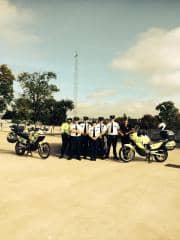 Local police are planning a major crackdown on motorists flouting the law as part of a concentrated three week road safety operation across the whole of E District, which takes in Armagh, Craigavon and Newry and Mourne.

“While the vast majority of right thinking people realise that speeding and other offences such as drink driving are unacceptable, there is still an irresponsible minority who ignore all advice and warnings and this operation is aimed at those people who continue to put themselves and others at  risk.

“This weekend alone across E District, seven people were detected driving with excess alcohol. It is unbelievable that people continue to take risks like this on the road.

“We will be conducting dedicated patrols and will focus on education and enforcement. We are asking for your help to make sure that our roads are safe for everyone who uses them.

“We are asking all  motorists to reduce their speed, wear seatbelts, do not use your mobile phone while you are driving and never, ever drink and drive.

“We will continue to  play our part and enforce the law and together we can prevent further death and injury on the roads.

Picture: The dedicated PSNI team who will focus on road safety across E District over the next three weeks.