Parking attendants to continue to ‘ticket’ on St Patrick’s Day 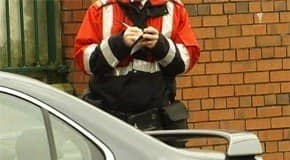 Sinn Féin’s Cathy Rafferty has said she is most disappointed by the “intransigent attitude of Transport Minister Danny Kennedy regarding parking fines issued in Armagh City on St Patrick’s Day”.

In the aftermath of parking tickets being issued, the city councillor wrote to DRD Roads Service and Mr Kennedy on behalf of “incredulous constituents, who simply could not believe that traffic wardens had been on patrol on the feast day of Ireland’s Patron Saint”.

Councillor Rafferty said: “I wrote to Minister Kennedy to seek clarity on the policy for St Patrick’s Day, bearing in mind that on public holidays, such as Christmas, Easter and those in July, motorists are exempt from having to pay for parking.

“Many of those affected on St Patrick’s Day were coming from 10am mass in St Malachy’s Church and they assumed that the parking levy was waived on this important day.

“The response I received from Danny Kennedy is most disheartening as he confirmed that St Patrick’s Day is not a day of exemption and he does not intend to change this policy.

“On the brighter side, car parking responsibilities are being devolved to local councils in April 2015, as confirmed by the Minister. I believe that it would be a significant gesture for the new Armagh Banbridge and Craigavon Council to designate St Patrick’s Day, Armagh’s premier day, as a day when people do not have to concern themselves with parking charges and can instead enjoy the festivities on the day.”