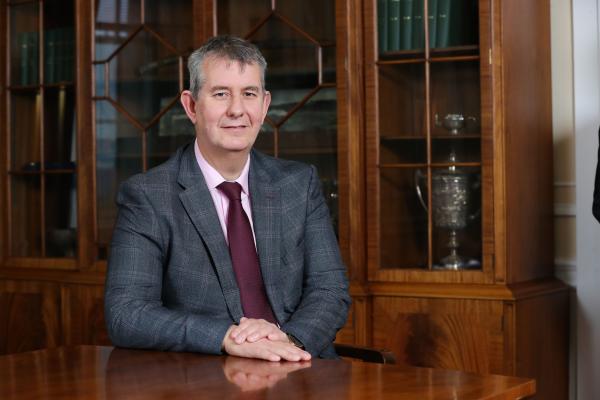 Edwin Poots has been elected as the new leader of the Democratic Unionist Party.

The current Agriculture Minister will replace Arlene Foster in the role, when she steps down later this month.

The news was confirmed by Party Chairman Lord Maurice Morrow.

The 55-year-0ld has represented the Lagan Valley constituency since 1998.

The new Deputy Leader is Paula Bradley, who beat Gregory Campbell to the role by 18 votes to 16.

Lord Morrow said: “The names of the Leader and Deputy Leader Designate will now go forward for ratification to our Party Executive and the Party Officers will move forward to make the necessary arrangements for that meeting in the time ahead.”

The new leader-to-be, Mr Poots, said it was an “immense honour and pleasure” to have been selected.

He thanked his wife and family for their support over the years, as well as his election team and “Almighty God”.

And Mr Poots added: “Im looking forwared to a positive relationship right across Northern Ireland with my party colleagues and indeed with people from other parties.

Mr Poots said his late father, who died last year, was a founding member of the DUP and he joined it after the death of the Rev Robert Bradford.

“The opportunities are great. We want to ensure for young people there are good jobs available in Northern Ireland, educationally we tackle the issues where young people from more deprived backgrounds get greater opportunity. We want to increase our university places. There is so much to do.

“We have work to do in our health service which is greatly challenged at this time with waiting lists which are horrendous anywhere in the United Kingdom.

“So there is much to do, there is much to be done, and I stand here today very proud to be taking up the mantle as leader of the Democratic Unionist Party and that brings with it a responsibility to all of unionism.

“I want to say this very clearly. I will be a leader in unionism that will be reaching out to other leaders in unionism. I want to see unionism working together.

“The Northern Ireland Protocol has proven to be a massive challenge for all of us and if we are to fight this to ensure that everybody in Northern Ireland is not worse off as a consequence of the Protocol then it’s for us to do that together.

“And I want to ensure that that is the case, that we don’t have the unionist bickering that we have had in the past, and I would encourage all unionists to work with me to deliver an end that ensures we set the foundations in this 2021 for another 100 years of Northern Ireland within the United Kingdom.”