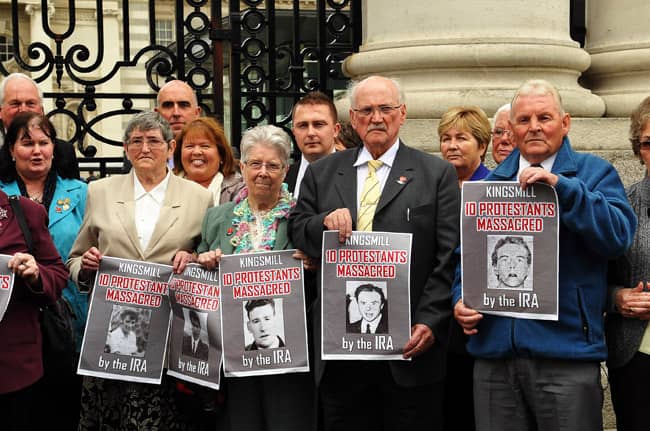 A British government proposal for an amnesty on all unsolved Troubles cases has been met with stern opposition in County Armagh.

The proposal, which applies to incidents prior to the 1998 Good Friday Agreement, has been described as a de facto amnesty for former British soldiers and former paramilitaries.

SDLP Upper Bann MLA Dolores Kelly said the British Government’s “brutal intervention is hostile to the interests of victims and survivors and must be opposed”.

“To shut down justice and close off avenues for truth and reconciliation by providing an amnesty to state agents and paramilitaries involved in the most serious troubles related crimes, including murder, is absolutely abhorrent,” said Ms Kelly.

“These proposals are hostile to the interests of victims and survivors, they are opposed by all Executive parties and the British Government must withdraw them now.

“The SDLP has tabled a motion to recall the Assembly from its summer recess to address this matter and send a clear message to the British Government that we will not consent to this course of action.”

She adde: “We are committed to using every means at our disposal to oppose an amnesty for those who have committed horrific crimes and destroyed the lives of thousands of people and families.”

Newry and Armagh MP Mickey Brady has said that the British government has shown a “complete disregard for victims of the conflict”.

The MP also said it was clear the British government was intent on hiding its role in the conflict and putting its forces beyond the law.

He said: “Families, many from this constituency who have campaigned with dignity and determination, have been left angered and hurt by this further attempt by the British government to cover up the truth and put its forces beyond the law.

“Some of these families have been fighting for truth for five decades. They have been forced to take to the streets and to go to the courts in an attempt to find out the truth about the deaths of their loved ones”.

“These proposals are about putting British state forces who killed Irish citizens beyond the law. It is further insult to grieving families.

“This is about the British government simply protecting their own state forces and the policy makers responsible for shoot to kill, state murder and collusion; facilitating impunity and blocking accountability.”

Mr Brady concluded: “If the current legacy process is to deliver for victims, in a human rights compliant manner, there can be no amnesty or statute of limitation for British state forces or intention to interfere with due legal process in respect of legacy inquests, judicial reviews, civil cases or prosecution cases involving British soldiers already before the courts.

“We will continue to demand the implementation of the internationally agreed Stormont House Agreement and stand with the families in their search for truth and justice.”

Mr Irwin said there could be no justification for a proposed amnesty and stated: “This really is beyond the pale. How will innocent victims of the IRA feel when reading that the British Government proposes to slam the door shut on justice for some of the most heinous crimes carried out over the troubles? They will feel completely demoralised and dejected and I would absolutely share that sentiment.

“This could not be a more grotesque proposal and it must be rejected by everyone who values justice and the rule of law.”

He added: “There of course has been a slide towards this point ever since 1998, when the terrorists were let out of jail early and then we had the infamous Blair era On-The-Run letters. Those were shocking enough betrayals of the innocents but then to see a further step down this road of appeasement really is rubbing salt in the wounds.

“The DUP does not believe there can be any equivalence between the security force member tasked to protect the people of Northern Ireland during very dark and trouble filled days and the masked terrorist who plotted day and night to callously and coldly take the lives of innocent people.

“My party will continue to oppose any such amnesty and we stand behind the innocent victims of terrorism and the ongoing quests for justice. No one should be above the law and the law must be applied equally to everyone.”