Mother tells heartbreaking story behind image of son in coma

Conor has been battling drug addiction from he was 15 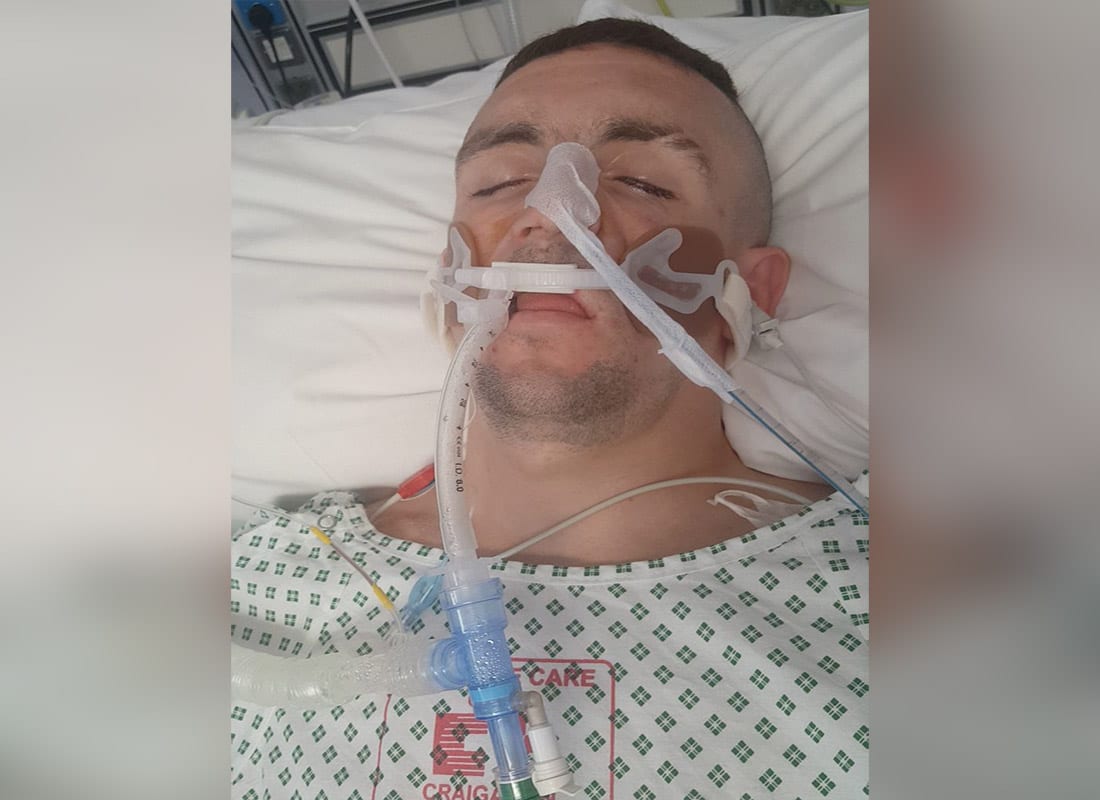 “Mummy, I haven’t taken anything, I need help, my head’s gone, it’s gone!”

This was the plea of a 23-year-old man to his mother as he began to suffer the effects of withdrawal from an eight-year drug addiction.

His mum Bernadette Curran shared a photo of her son on social media as he lay stricken in his hospital bed.

That powerful image has since been shared, commented upon and reacted to by thousands of people, all showing their support.

Bernadette spoke candidly to Armagh I about the story behind that image.

“Conor has been battling drug and alcohol problems for eight years now, he’s been in and out of trouble since he was 15,” she explained.

“He first experimented with the herbal drug miaow miaow (Mephedrone) before it spiralled from there. It has just got worse.

“This town is just rife for prescription drugs; it’s more prescription than it would be Class A drugs. I have seen Conor party for a full week, taking alcohol and drugs.

“He collapsed at Christmas when he took an overdose of Ecstasy, lyrica and alcohol. He was carried out of a field on a farm on a stretcher.

“That was his first major incident and there was even one time I found him passed out on the floor in the kitchen. That was the second major incident. I took him to the doctors and asked him to be referred but nothing ever came of it.”

Bernadette says her son’s addiction is so bad, he doesn’t know how to say no.

“Some of the nights Conor would go out, if he was given 10 grams of coke and 10 bags of herbal he’d take it all; there’s no restraint, his brain is fried.”

She added: “He has been severely attacked several times; he has over 100 stitches on his body.

“He was stabbed in the shoulder with a machete and got 32 stitches.

“Most recently he was attacked by a man with a broken glass bottle, who has just recently been released from prison so I would say that has had a major impact on his behaviour.”

Bernadette explains how the passing of her own mother, Conor’s grandmother, had helped him stay off the drugs for a bit, but it wasn’t long before he succumbed to that temptation once more.

“After we held a charity event in memory of my mother he went back on the drugs in a serious way and it absolutely broke my heart.

“It was then he said to me he’d go off them for good. For 10 days he didn’t leave the house. But on Thursday night his body began to shut down and he started suffering from psychotic hallucinations.

“I cried my eyes out in the house and asked Conor what he had taken but he said ‘mummy, I haven’t taken anything, I need help, my head’s gone, it’s gone!’

“So we both went down to the doctors on Friday and told her that he needed immediate help; the exact same thing as he was telling me the night before but she said it wasn’t as simple as just admitting someone. I said to her that ‘if you let my son go out of here today, it’s going to have severe repercussions on his health’.

“Just the week before, I had the conversation with my brother, Brendan. I said if I don’t get Conor help I’m going to be burying him within six months.”

Despite Conor and Bernadette’s plea to have him locked up and looked after, they were told there were procedures to follow.

“When I got the phone call to say he was in an induced coma, it was just desperate,” Bernadette recalled.

“Conor was at a rave and he started having these hallucinations again – he had taken Ecstasy.

“Luckily his cousin had noticed something was wrong so she took him to the paramedics who assessed him before they phoned the ambulance. He was transferred to Craigavon ICU.”

“We begged the GP, he cried his eyes out to get locked up. He went into the doctors and told them he wasn’t OK. They said he has to be assessed and that it’s just not that easy to do – they just don’t want to know. Conor near lost his life because of it.

“At the minute, he’s happy to be put away but come next weekend he’ll not want that; he’ll start partying again and you’re back to square one. In denial.

“If someone says they want help and they need help, you give it to them in my eyes – you don’t wait for six months.”

Despite what many see as his shortcomings, Bernadette’s love for her son is unconditional.

“He’s such a good kid. He’s so athletic, he’s a brilliant footballer, a great boxer but that is so much talent going to waste.

“People are quick to put him down just because he takes drugs. He needs help more than anything.”

A spokesperson for the Southern Health and Social Care Trust told Armagh I : “Each year, in the Southern Trust we provide care and treatment to around 2,000 people with drug and alcohol addictions who need our help. This support and treatment is delivered in primary care settings, patients’ own homes and in our own facilities.

“People with drug or alcohol problems should firstly go to their GP who will signpost them to support services in the Trust and community and voluntary organisations for advice and help. Referral to Trust Services is usually by a GP and, dependant on the urgency of the request, the person will be seen at a clinic as soon as possible.

“Our Community Addictions Team provides a range of assessment, care, treatment and support services to increasing numbers of people throughout the area – including alcohol dependency withdrawal programmes.

“We also have a number of hospital liaison nurses and an alcohol liaison midwife who work closely with our acute hospital staff to identify and care for patients with drugs or alcohol related issues.

“Because addiction can affect the whole family our Family Intervention Service is also available to offer help and support to spouses, parents or any relative affected by addiction.

“The Lifeline Helpline service is available for children, young people and adults to access if in distress or despair by telephoning – 0808 808 8000 – Lifeline has trained counsellors available 24 hours a day, seven days a week to listen and provide confidential help and support on issues such as self-harm, abuse, trauma, depression and anxiety and many other issues.”