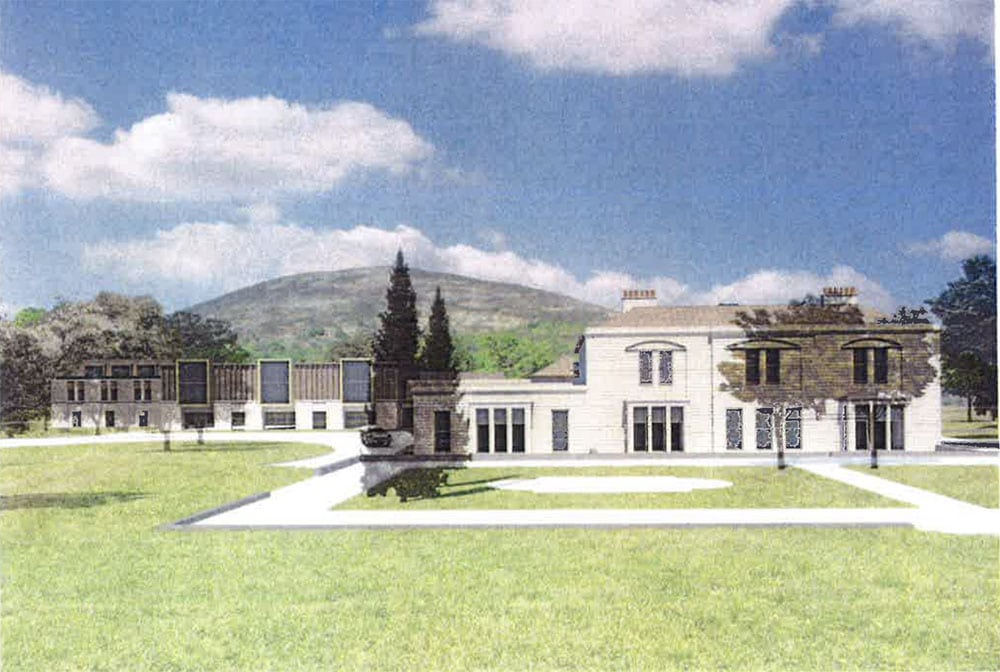 A proposal to resurrect the fire-ravaged Mourne Park House in Kilkeel as a 126-bedroom hotel and spa – at a cost in the region of £13 million – has been rejected by planners.

The application – which was submitted last July – has been turned down after a meeting of Newry, Mourne and Down District Council’s planning committee.

As Armagh I reported last year, the development would have created in the region of 70 new jobs upon completion, with many more during the construction phases.

The main body of the stately home was constructed around 200 years ago.

But it was almost totally destroyed by fire seven years ago, with little but the main stone walls left standing. At that time a 10-year programme of restoration had just completed and proposals were being finalised for it to be converted into a boutique-style hotel.

In its current form, Mourne Park House is described as a “private dwelling house, partly vacant since May 2013”.

Owner Marion Scarlett Needham Russell had huge plans for the site, which would have involved both refurbishment and new building work.

The overall development would have seen the creation of a new luxury hotel incorporating a spa, function room, restaurant and manager’s quarters, together with “associated facilities” as well as car parking provision for staff and guests.

The spa facilities were to be located within an existing walled garden.

The existing property boasts floor space in excess of 38,000 sq ft but the new buildings would have seen the proposed hotel almost three times that as floorspace was intended of close to 137,000 sq ft.

An application seeking permission for a change of use and new building was made to Newry, Mourne and Down District Council last summer.

CIS estimates the cost of the overall proposals to be in the region of £13 million.

But councillors have endorsed a recommendation to refuse permission for the hotel and spa.

The professional planning case officer’s report concluded that “the proposal if permitted would have a detrimental impact on the essential character, setting and appearance of the listed buildings of Mourne Park”.

They said it was contrary to a number of policies and would have a “significant detrimental impact on the character, setting and appearance of Mourne Park Historic Park and the Mourne Park listed buildings and their curtilage by reason of the mass, scale, siting and design, alignment and height, materials and traditional architect details and techniques”.

While the application has therefore been turned down, the applicant will have the right to appeal the decision or submit amended proposals for further consideration. It is not yet clear if either option will be taken up.