'We feel as if the south Down, south Armagh and GAA community has wrapped its arms around us and is just carrying us along' 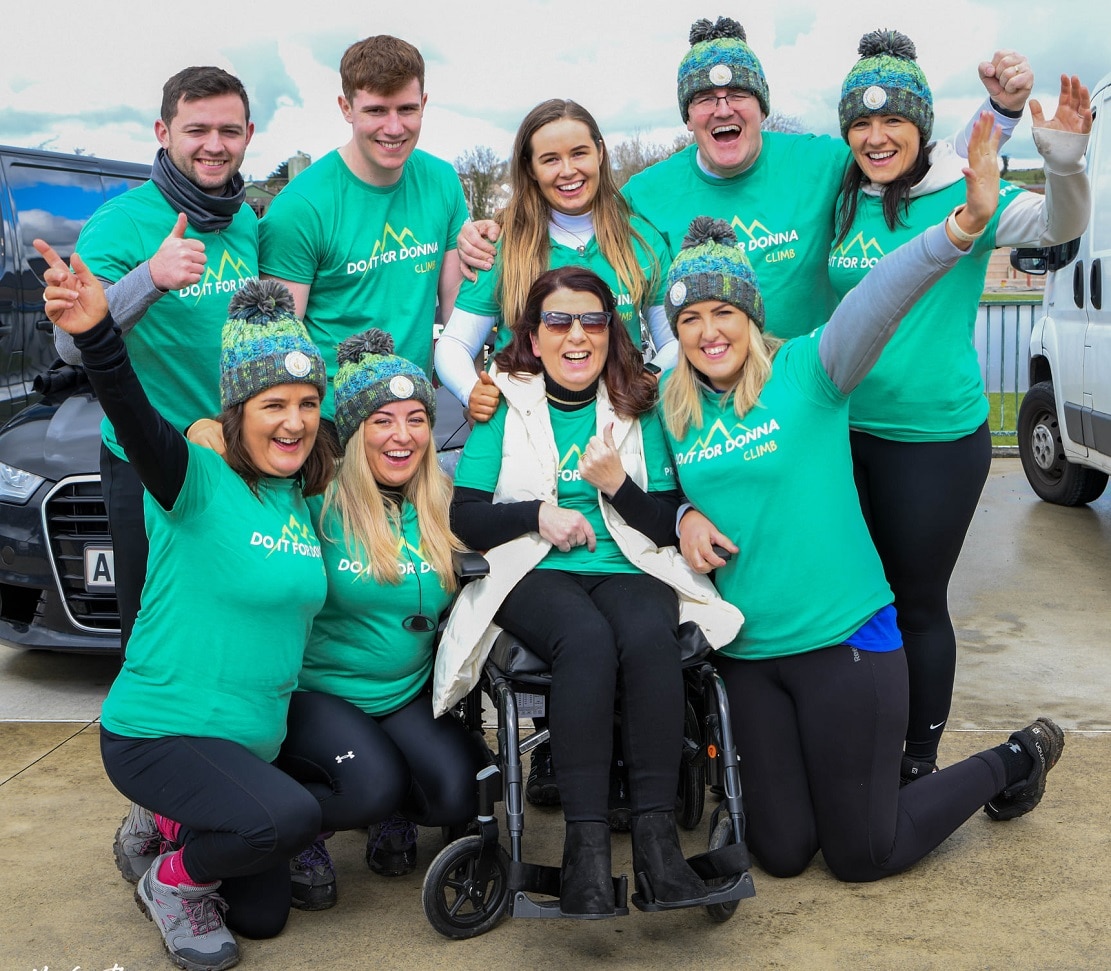 “Beyond our wildest dreams” is how local man Anthony Sloan has described Saturday’s fundraising climb for his wife Donna.

Up to 1,800 people turned out to support the ‘Climb for Donna’, walking to the summit of Camlough mountain in solidarity with the mum-of-four who, says Anthony, has a “mountain to climb every day”.

Donna (54), from Lislea near Camlough, was diagnosed with motor neurone disease (MND) in March 2021, a year after first developing symptoms.

Said Anthony: “It was just so rapid. At the start of lockdown in March 2020, we were living the perfect life – we were out walking, baking scones. Donna would literally have raced me on parts of the road.

“Around May or June, she started to slur her speech slightly, then began losing her balance and falling until it got to the point she couldn’t be left on her own. ”

Donna is now confined to a wheelchair, unable to speak, is fed via a tube and requires round-the-clock care.

However, that didn’t stop her going along on Saturday to greet the walkers and the many people who have supported the family over the past year.

Said Anthony: “We feel as if the south Down, south Armagh and GAA community has wrapped its arms around us and is just carrying us along.

“It’s mental what went on on Saturday, the amount of people who gave up their day to come and be with us.

“From the minute we came into Camlough there were people out collecting with buckets and she started smiling.

“My good friend Banjo Bannon was at the summit and he said there were no gaps right the way down the mountain – just a continuous stream of people.”

He admitted Donna was initially apprehensive about attending on Saturday.

“She is an extremely private person. There were people there on Saturday, and the last time they saw Donna was in her professional capacity, as a fit and able person who was a leader, an opinionated person who got stuff done,” said Anthony.

Before her diagnosis, Donna worked for the Southern Health and Social Care Trust as a volunteer  co-ordinator, and previously at the Women’s Health Initiative in Mullaghbawn where she supported marginalised people and groups.

“Donna loved working in the community,” said Anthony.” She didn’t like to tick boxes, she liked providing services.

“A friend of  ours Pat McGinn summed it up when he said she was the voice for marginalised groups who had no voice and now it was the turn of the community to be Donna’s voice.” The couple are childhood sweethearts. They met when they were 14 and have been married for 33 years.

Donna is able to speak by typing into a device which talks for her. The family are in the process of having their three daughters’ voices amalgamated and put into the programme so it will sound like Donna.

Said Anthony: “Donna is still super intelligent and alert. Her mind is perfect. She keeps us on our toes and she give us great laughs.

“She loves Twitter, following politics and current affairs. Yes, there are down days but most of them are positive. We have good people around us who help us.

“I lift her out of bed every morning and every morning she is smiling. At the minute I am doing everything for Donna, and I will for as long as I can.

Motor Neurone Disease (MND) is a terminal condition with no cure which affects the brain and nerves. It is progressive and impacts on walking, speaking, swallowing and breathing.

Since Donna’s diagnosis, Anthony and Donna know of two people from the local area who are on the verge of receiving a diagnosis, and they have been able to support and advise them. The climb was the first event in the DoItForDonnaCampaign and Anthony would love it to become an annual one.

The campaign aims to raise awareness, educate and fundraise with the goal of finding a life-changing treatment or cure for Donna.

If Donna loses her battle before a cure is found all money raised by the campaign will be donated to the Beaumont research to help support families and fund research.